After the end of the dressage at the Land Rover Burghley Horse Trials today (1 September), four of Britain’s eventing World Championship horses and riders came into the main arena to practise the dressage tests they will perform at Pratoni del Vivaro in two weeks’ time.

Carl, who is one of Laura’s dressage trainers, said most riders have to manage and conceal horses’ weaknesses in the arena, but London 52 doesn’t really have any weaknesses.

He added that Laura’s extended trot deserved a 10 and praised the fact that she is such a subtle rider in the way she applies the aids.

“Personally, watching this, if it wasn’t for that one halt and rein-back [where the pair had a small blip], the score would almost be below 20 with how Laura’s ridden today,” summed up Carl.

Laura said that “Dan”, who is owned by Keith Scott, Karen Bartlett and Laura, hasn’t been in an atmosphere like this since Badminton so it was “brilliant to get a feel for where we’re at two weeks out from the World Championships and know what fine tuning we need to do”.

“It feels like not enough days to fit everything in now,” she said. “The main plan is to keep him in one piece, keep him happy and sweet. I probably won’t ride through the whole test again before the event, but I’ll break it up and focus on the bits that need working on to try to get better.

“I feel lucky to have the opportunity to go and represent my country again, and to have a horse like this – I’m the luckiest girl in the world. Hopefully we can go and add to the team gold we won in Tokyo and I’d quite like an individual medal too!”

Carl had never seen Yasmin and Banzai Du Loir in real life and he noted that she had to keep a very soft leg to avoid the horse coming high behind in his flying changes, a movement where he can also be exuberant.

“But he’s so soft and relaxed through his whole topline,” he said. “Overall I’m very impressed. I love the scope in all three of his paces, the way he’s so rideable, and I like her riding.”

Stephen Clarke said he’d give Yasmin a 10 for her move off out of the first halt, which was “absolutely straight”.

Yasmin said: “You always want to ride into a dressage arena and do your utmost to get a 10 so it’s definitely really exciting to have the opportunity to do the dressage here in the main arena at Burghley today. It’s all part of the preparation, so big thanks to everyone at Burghley for making this possible for us.”

Yasmin said she’s been working her whole life towards representing her country at a senior championship.

“It’s just a huge boost and positive moment for us all so I’m really excited to try to do our best in two weeks,” she said, thanking owners Sue Davies and Janette Chinn for the opportunity to ride Banzai.

At 10 years old, Michele Saul’s Lordships Graffalo is the youngest and greenest horse on the squad and that was clear at times today, but Carl said that he has “so much potential” for the future.

“He’s more powerful behind than in front at the moment, so when he goes forward he tips downhill more than the previous two horses, but if they’ve got the power – which he has – you can convert that to balance,” he said.

Stephen Clarke commented that Ros’s half-passes were “beautifully positioned and fluent” and that he was impressed with the risk she took in the final extended canter “and she pulled it off for a nine”.

Ros said: “I’m really delighted with ‘Walter’ today. He came out this morning quite excited, which is quite unusual for him but very nice. I think the last thing he did in a big atmosphere was prize giving at Badminton, which he thoroughly enjoyed and he thought he was coming just for that.

“I warmed up thinking I was not going to do the full test – I thought I was just going to work him, but he settled so well, I went for it. He’s only a 10-year-old and there’s so much more to come from him – bits and bobs to work on over the next few weeks, but I’m pleased with how level he was today.

“At the start of this year, no one believed he’d go and come second at Badminton. We were just going for a nice experience. Walter had other ideas – he fancied a trip to Italy. I’m always trying to be mindful he’s only 10 and will hopefully have a long career. I’ve got to be as competitive and brave as I can, but be mindful of the fact I’ve got to look after him and every test we go into is still a school day for him.” 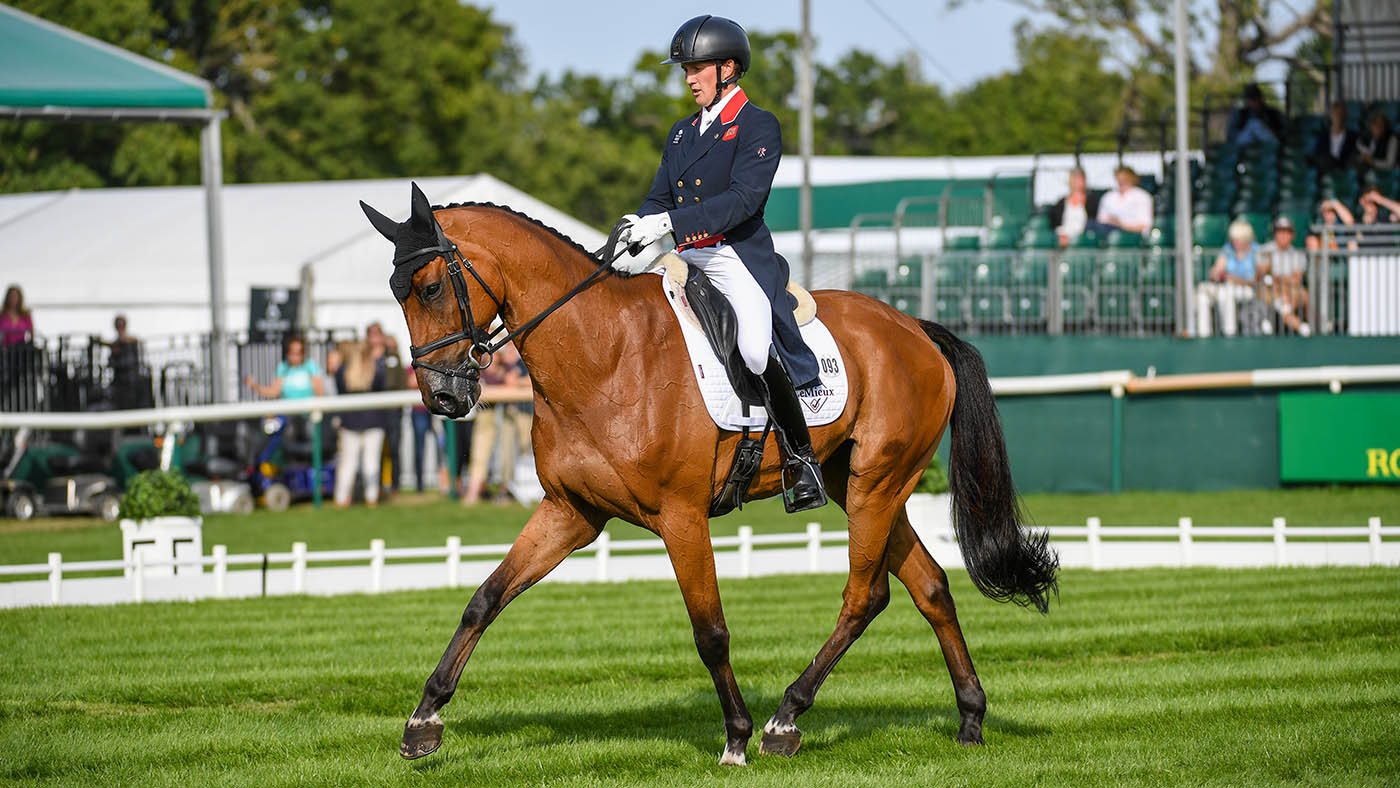 Carl was impressed by the self-carriage shown by Toledo – owned by Fred and Penny Barker, Jane Inns and Tom’s mother Ali – in his trot work and by how brave Tom was in riding his first flying change out of a big canter.

“You can see how a team can lead the dressage when you see these four here,” he commented as Tom finished.

Stephen said: “It’s really nice to see such good forwards riding. Again, like all the British combinations, the lateral work – the half-passes and well executed shoulder-in – were highlights and thanks to very good training it is very competitive.

“The whole day has been great, to have the horses in this atmosphere so close to the championship and really give the riders a chance to feel how the horses are going to react and deal with it.”

Tom thanked the public for coming and helping to give the World Championships horses this “fantastic preparation” at Burghley.

“We were a little fresh – he loves it and loves the big atmosphere, loves Burghley as a whole. He was fourth here five years ago. To run a test with a little bit of pressure, but at the same time no pressure, is an amazing training aid. I didn’t come in 100% prepared as we only had our last run on Monday. He’s been chilling here and I should have done more work with him.

“He’s quite a character and stunning to the eye. We need to tick all the boxes and we’ll be right there.”

Tom said he loves the team aspect of a championship and is really looking forward to Pratoni.

“If riders were had trump cards, I couldn’t pick a better squad,” he said.

The fifth squad members are Oliver Townend and Ballaghor Class, owned by Val Ryan, Karyn Shuter and Angela Hislop. Oliver decided not to use the Burghley practise as part of his preparation for Ballaghmor Class, who ran well in the CCI4*-S at Blair Castle Horse Trials last weekend.

Keep up with all of the breaking news, behind the scenes insight and the best of the action throughout Burghley Horse Trials with no limit on how much you can read from as little as £1 per week with a Horse & Hound unlimited website subscription. Sign up now. Plus enjoy our full 20-page magazine report on Burghley, including in-depth analysis and exclusive comments from Nick Burton and Mark Phillips, in next week’s magazine (8 September).