There was a five-star showjumping bonanza close to home this week, with both Dublin Horse Show and the Longines Global Champions Tour of London vying for our attention. We witnessed a barefoot grand prix winner, heart-warming scenes of Irish ecstasy and heard about one mare’s miraculous comeback from serious injury.

Here is your weekly round-up of just some of the international sporting action from the world of showjumping, as well as this weekend’s showjumping results.

‘This has been a lifetime goal’

Nothing means more to Irish showjumpers than to lift the Aga Khan Cup for the Longines FEI Nations Cup of Ireland at Dublin Horse Show and on Friday (19 August) the quartet of 18-year-old Max Wachman (Berlux Z), Conor Swail (Count Me In), Cian O’Connor (Kilkenny) and Shane Sweetnam (James Kaan Cruz) bridged a seven-year gap to lift the coveted trophy amidst great scenes of jubilation. This was the nation’s 24th victory since its inception in 1926 and came after an epic duel with France to decide top honours.

“It’s been a lifetime goal and an incredible achievement to be Irish and win the FEI Nations Cup of Ireland,” said Conor, Ireland’s chosen jump-off representative, who couldn’t quite believe he’d nailed victory. “I looked up and the screen said two – I thought I wasn’t fast enough, it usually says one when you’re the quickest.” The cheering crowds soon put him right.

Anchorman Cian O’Connor, on his 16th Dublin team appearance and landing his fourth Dublin win, said after his double clear: “Kilkenny felt like he owned the ring, it was on me not to make a mistake.”

A miraculous comeback from injury for former world-beater

“She’s just an absolute legend,” said Nicole of the 10-year-old Colestus x Colorit German-bred mare, who was a big winner in young horse classes, taking the World Young Horse Breeding Championships in Lanaken as a five-year-old when ridden by Pippa Goddard and finishing runner-up there as a six-year-old with Donald Whitaker in the saddle, before going on to win the newcomers final with him in 2018.

But disaster struck two years ago in Spain when Chilli got loose in the arena and tried to jump out, resulting in injuries that have required two years of healing and recuperation, making this an emotional return for the team.

“She basically lost all the muscles in her armpit and needed two years off,” said Nicole. “It’s amazing that she’s healed and has come back to jump at this level. We brought her back very slowly. She started jumping again a couple of months ago and Tom said a long time ago that he wanted to win the grand prix in London with her and we did it! She absolutely loved it – to win here is amazing.”

Read more about Nicole’s winning round 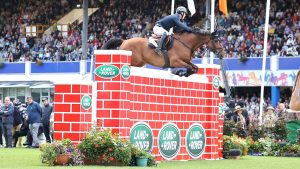 Ireland’s Mikey Pender claimed a stunning hat-trick and the leading rider award at Dublin Horse Show. Marion Hughes’ consistent home-bred Catoki x Douglas 11-year-old HHS Fortune doubled up, taking the opening day’s speed stakes with 1.38 sec to spare and the speed Derby by a clear two seconds. Mikey’s 2019 Hickstead Derby champion Hearton Du Bois Halleux stepped up in the puissance, the Nonstop 15-year-old the only one to clear 2.20m in the five-way decider.

“This is the best show in the world. My horses have been on fantastic form and the crowd was behind us all week,” said Mikey.

THE Brits may have been pushed off the podium for the first time since the Longines Global Champions Tour of London grand prix’s inception, but MOM’s Toupie De La Roque, the characterful chestnut mare (pictured below) who took the €100,000 (£84,830) jackpot for Belgium’s Pieter Devos, still won the admiration of the crowd. Pieter’s distinctive, white-stockinged 15-year-old, who competes barefoot and without front boots, used every ounce of athleticism and care to clear the second fence, after losing momentum on a risky, tight turnback. Her enthusiasm shone out round the rest of the track, where the split-screen analysis showed she found even more of an advantage on a brave run to the vertical at the last.

“The horse was doing absolutely everything she could to jump the fences clear,” Pieter said.

Second-placed rider Olivier Philippaerts was also riding a barefoot horse, the 10-year-old H&M Miro. Best of the Brits was fourth-placed Ellen Whitaker riding Andrew and Tilly Shaw’s 10-year-old grey Equine America Spacecake, who has “bunny-hopped” up the levels this year.

“She’s really quite inexperienced and I am so happy with her,” said Ellen, who started out jumping the mare at 1.10m and 1.20m in summer 2021 and began her five-star career in Rome this year.

Read more about the LGCT grand prix of London 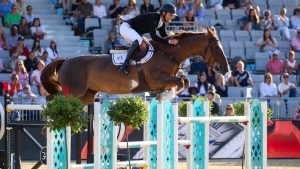 British rider Matt Sampson has been enjoying plenty of success across the pond so far this summer, including top wins at Spruce Meadows, and he continued that streak this weekend. Matt and Elisa BJX took the 1.50m CSI3* ATCO Cup Grand Prix at Thunderbird Show Park, near Vancouver, nearly three seconds ahead of the USA’s Karrie Rufer on Stern dei Foletti.

“I thought, ‘It’s not very often you get to be in a grand prix at a show like this in the jump-off’,” Matt said. “She’s 10 years old, so she’s old enough to give it a go, and she just rose to it. That’s what good horses do.”

The mare had only jumped her first 1.50m course two days beforehand, in the “tbird” CSI3* Uryadi’s Village Cup.

“She [jumped] 1.50m on Friday, and we had two mistakes, but she just learns. She’s clever,” Matt said. “In the first round, she felt really good but a little inexperienced in places. In the jump-off, she felt amazing.”

Elisa only joined Matt’s string in June at Spruce Meadows.

“It’s difficult to get to know the horses at the show when you’re trying to compete with them, because you don’t really get that time for them to get to know you and vice versa—to create that bond where she trusts me,” he said. “I think we’ve really got that now.”

Swiss rider ‘steals’ his first five-star success from the Irish

Sunday’s Longines grand prix at Dublin Horse Show was won by Edouard Schmitz on Gamin Van’t Naastveldhof for Switzerland. Only seven of the 40 starters mastered course-designer Alan Wade’s 14-fence 1.60m track with Edouard registering his first win at this level by 0.47 sec.

“I got a good turn from fence one to two and I was cheeky on the rollback turn to the [penultimate] oxer,” said Edouard, who also executed a risky gallop to the double on the Chacco Chacco x Toulon 10-year-old. “He’s a big-striding horse with a good canter.”

Asked if he knew what it meant to win Ireland’s biggest grand prix, he replied: “I do. I’ve stolen it from two Irish riders but it couldn’t be a better place to win my first five-star grand prix.”

Conor and Count Me In came so close. “One less stride to the last would have got it but he’s jumped five clears over three days, I couldn’t ask for more,” he said, after edging ahead of third-placed teammate Shane Sweetnam on James Kann Cruz. 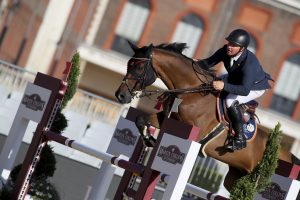 A speedy win on a ‘slow’ horse

Adam Botham took Saturday’s Martin Collins London Cup at the LGCT with a super round on Barbara Hester’s 10-year-old gelding Harvey. The 1.30m speed class was claimed with an innovative ride from Adam on Harvey, who he says is not naturally the quickest horse. So what was the secret to their success?
“I did one less stride everywhere basically!” said Adam, who won in 58.50sec, nearly a second faster than his closest rivals.
“Harvey’s not a fast horse, so he has to really try. When you walk the course, you have to work out how to do something different to everybody else with him in order to be fast enough, because when he jumps he doesn’t scoot through the air. He jumps high, and he’s a bit slow, but that’s why he can jump a big class. But in these speed classes, you just have to make sure you do something different.”

Wins galore for Breen and Howley

Great Britain-based Irishman Richard Howley claimed a hat-trick of wins at Dublin Horse Show while Trevor Breen soared to the top of the 1.50m Dublin Stakes riding Germaine W, jointly owned with Mandy Hall and Paul McAteer. Richard’s first win came in the Minerva 1.45m speed class on the Harley 12-year-old Fame with 2.26 sec in hand over William Whitaker’s Jalellah OL. They followed it up with a win in the pairs relay with Cliodhna McEvoy, 10, on 128cm Tynnan Tuttle Pip. Richard also took a 0.27 sec win in the Kilkea Castle 1.45m speed on Sarah Borthwick’s Chinook, a Tygo x Wellington 15-year-old at his second show since returning from injury 14 months ago. They arrived on form after a double victory at Bolesworth two-star the previous week.

“He’s been amazing these past six years. He’s won at every level, even when asking him beyond his capabilities, he never backs down from a challenge. He’s a fighter,” said Richard.

“Arlo gave me everything – he loves the speed,” said 26-year-old Nicola, who took the reins at the start of the year.

‘It’s suddenly hit me now. I owe her so much’

The opening Hyde Park Stables 1.15m two-phase at the London leg of the Longines Global Champions Tour resulted in an emotional win for Ireland’s Aisling Byrne, who was told four years ago that she would never walk again after a riding accident in which a horse fell on top of her.

“I didn’t think I’d ever see that vision looking through the ears again, so even to have that, then to get in the ring, then for her to win… it’s incredible, a dream come true,” said Aisling, who was riding her super grey mare Wellview Lucy. “She was the first horse I got back on and jumped my first 60cm again after my accident, so she’s brought me all the way. It’s suddenly hit me now. I owe her so much.”

Read what else Aisling had to say

“People need goals and they need dreams, and even if they don’t reach them, you’ll still have done better than

The legendary former showjumper owns a horse competed by his grandson

Canines Undergo as Extra Are Abused On-line, And Justice is By no means Served