The Pleasure of Being Revealed in A number of Languages


It’s just a wonderful feeling, knowing that what you’ve written has been published in a variety of languages. Imagining people reading The Other End of the Leash in Polish or Spanish makes me smile. It’s not just the intellectual knowledge that one’s books have circled the globe; it as much a feeling of connection. A connection to other cultures, other countries, other people who love dogs as much as I do.

It is that connection that feels so important right now, in a time when being truly connected to other people feels increasingly threatened. So, join me, in celebrating that people all over the world can bond over their love of animals, and that, in a variety of languages, we can read the same books, under the same sun and the same moon, on our tiny, green, gorgeous, and oh-so-vulnerable, little planet.

I haven’t sat down and figured out where all my books have been published in a long time, and I thought I’d enroll some of you in the journey to find out. I love LOVE hearing from people from other countries, so please jump in if you’ve read any of my books in a language other than English. (Not to mention what the titles of the book actually say!)

Here’s what I have right now in my records (which might be out of date, publishers are pretty slammed right now just keeping their heads above water):

The Other End of the Leash has been published in Austria, Brazil, China (in both “traditional” & “simple”), Denmark, Finland, Germany, Italy, Korea, Poland, Russia, Spain, & Sweden.  And, in Australia, which is still in English but I LOVE that the book is available there. My trip to Australia when the book came out in that country was a life’s highlight, so hello to everyone in that great country.

For the Love of a Dog has been published in Italy, Germany, Poland, Russia, & Spain.

The Education of Will was marketed as a “dog training book,” when it is actually a book about trauma and recovery in two species. I think the only other countries it’s in are Germany and Spain. I am very, very grateful that they are there!

Kynos publishers in Germany deserve a special shout out! They have published not just The Other End of the Leash, For the Love of a Dog, & The Education of Will, but also several of my smaller self-published training books. They have been a fantastic partner over the years, and I’m truly grateful to them.

Now, the super fun part. The Covers! Here’s a newly designed cover for OEL (Other End of the Leash) in Korea:

And here are a whole lot of other covers–can you guess which cover goes to which country? What the titles translate to? 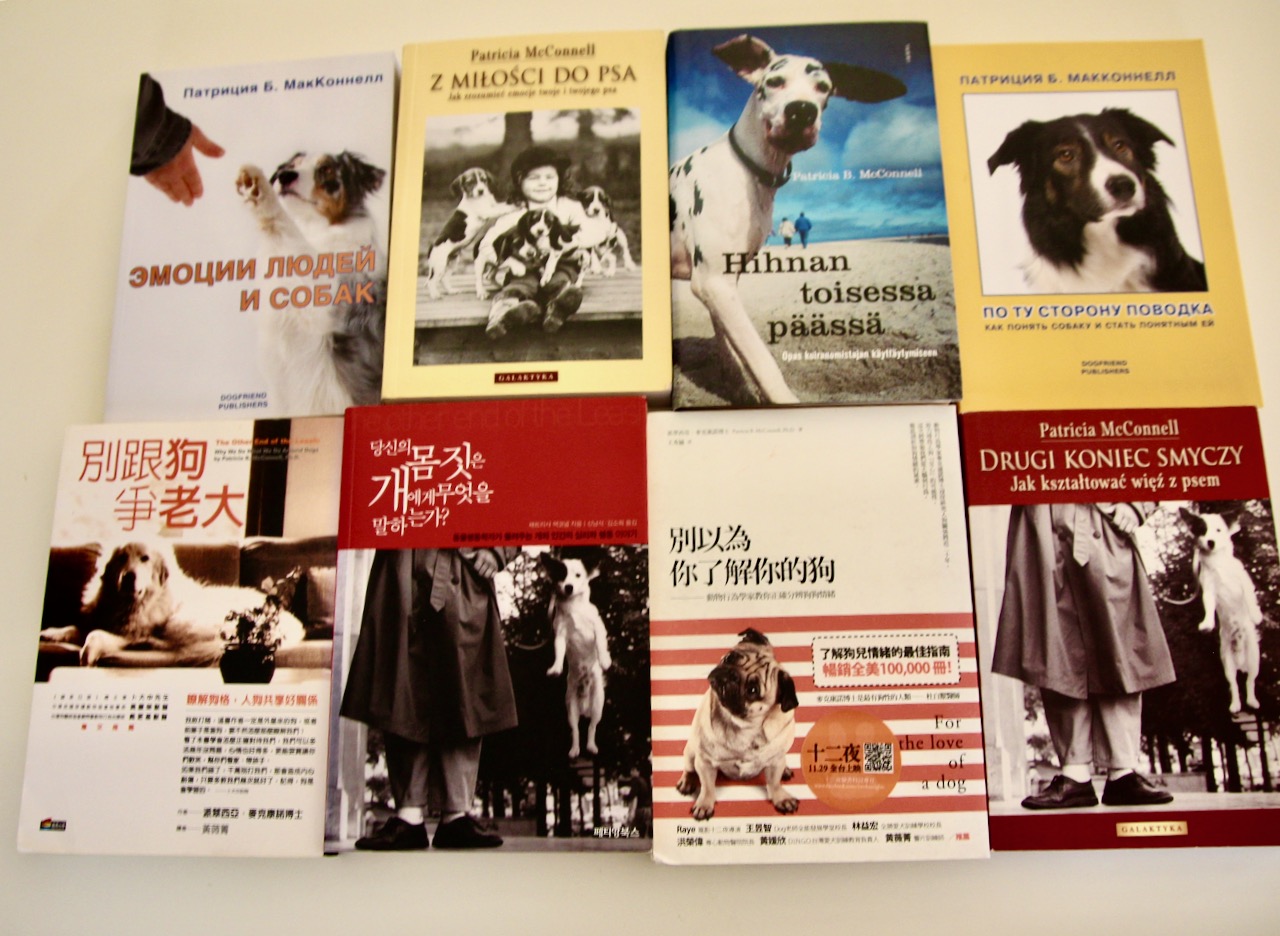 It fascinates me how some publishers use the same title, while others use their own. The Spanish version of The Education of Will is the same, while the German version translates to “Thanks to Willie.” (At least, that’s what Google says. Anyone have a better one?) The Chinese version of OEL is ““Don’t compete with your dog to be the boss.” (Thanks to translator Vicki Huang for filling me in on Facebook!) 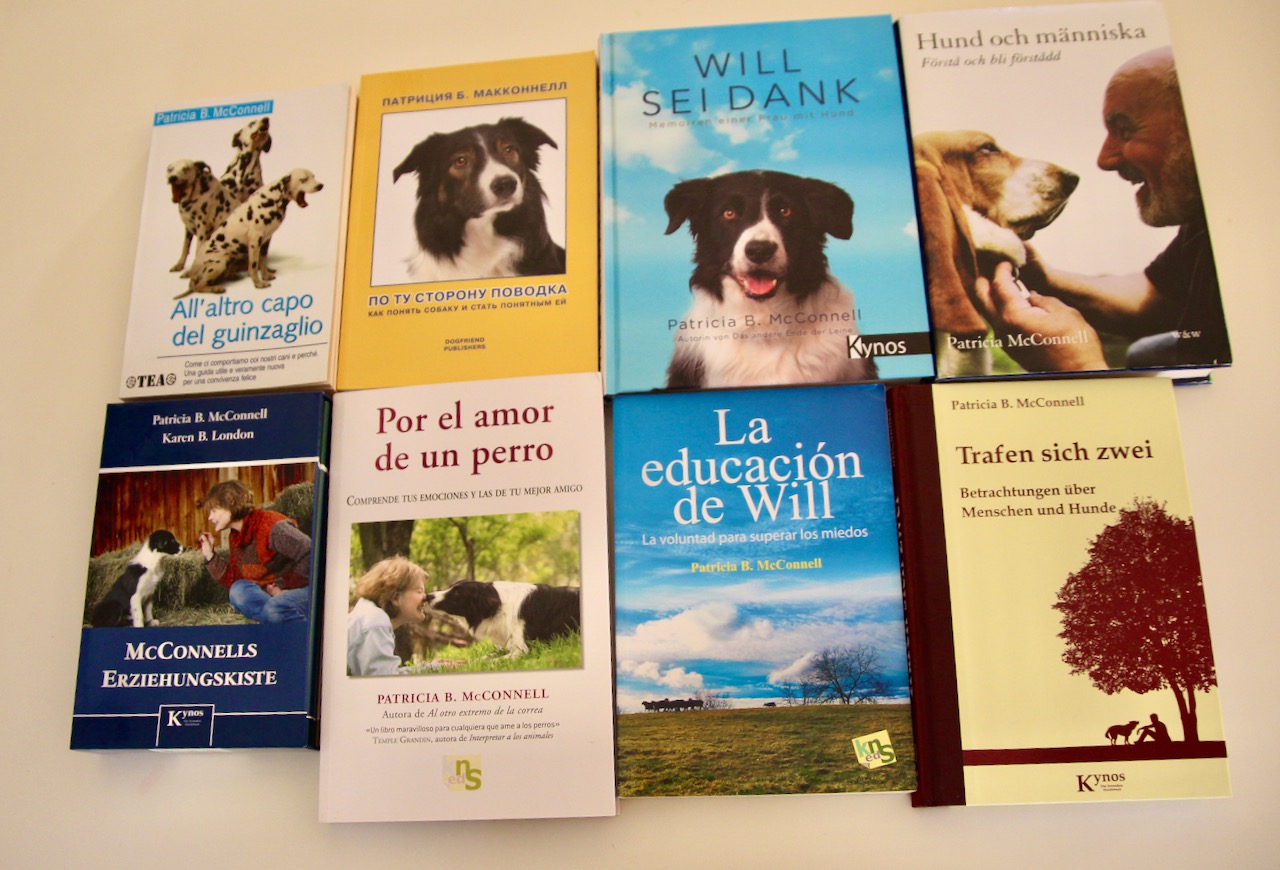 Please, please jump in here if you are fluent in any of these languages, and/or read any of the books in a language other than English. I’d so love to hear from you!

MEANWHILE, back on the farm: Last weekend, with a high of 77 F, saw most of Wisconsin residents outside, cleaning windows, (should’ve), watering before we have to put away our hoses (did that), and/or painting or staining the thing we said we’d get to in June (our picnic table). After several nights well under freezing, not to mention some snow, it was great to be able to use the hoses again, and get into the garden.

It FINALLY rained this morning, it’s been terribly dry, and it’s been windy for days. These lovely leaves are now long gone off the tree in our yard, and it’s starting to look more like November rather than October. 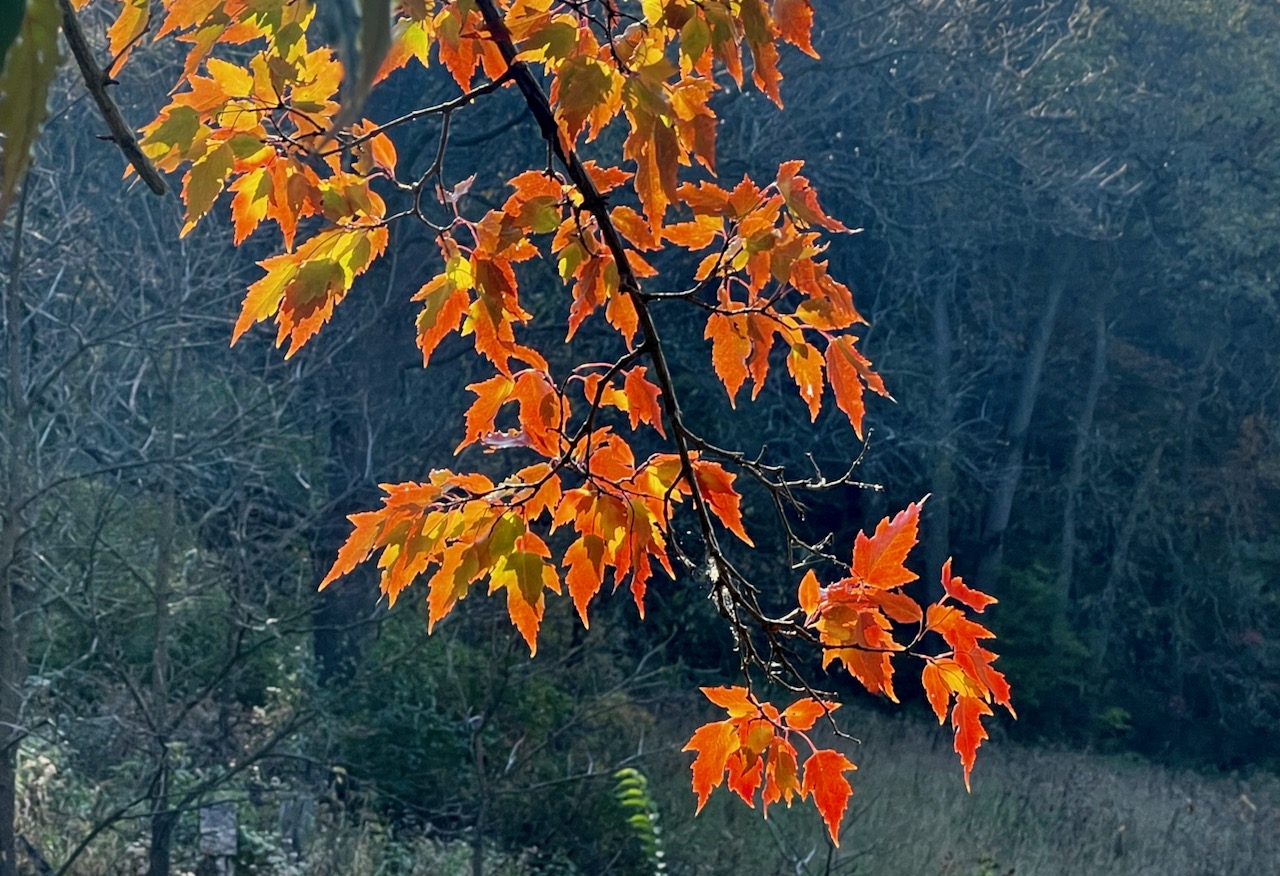 Our bird feeders have been busy, busy, busy. Here’s a male Downy Woodpecker loving this combination of suet and seed. Right now we are seeing Downy, Hairy, and Red-Bellied WPs. 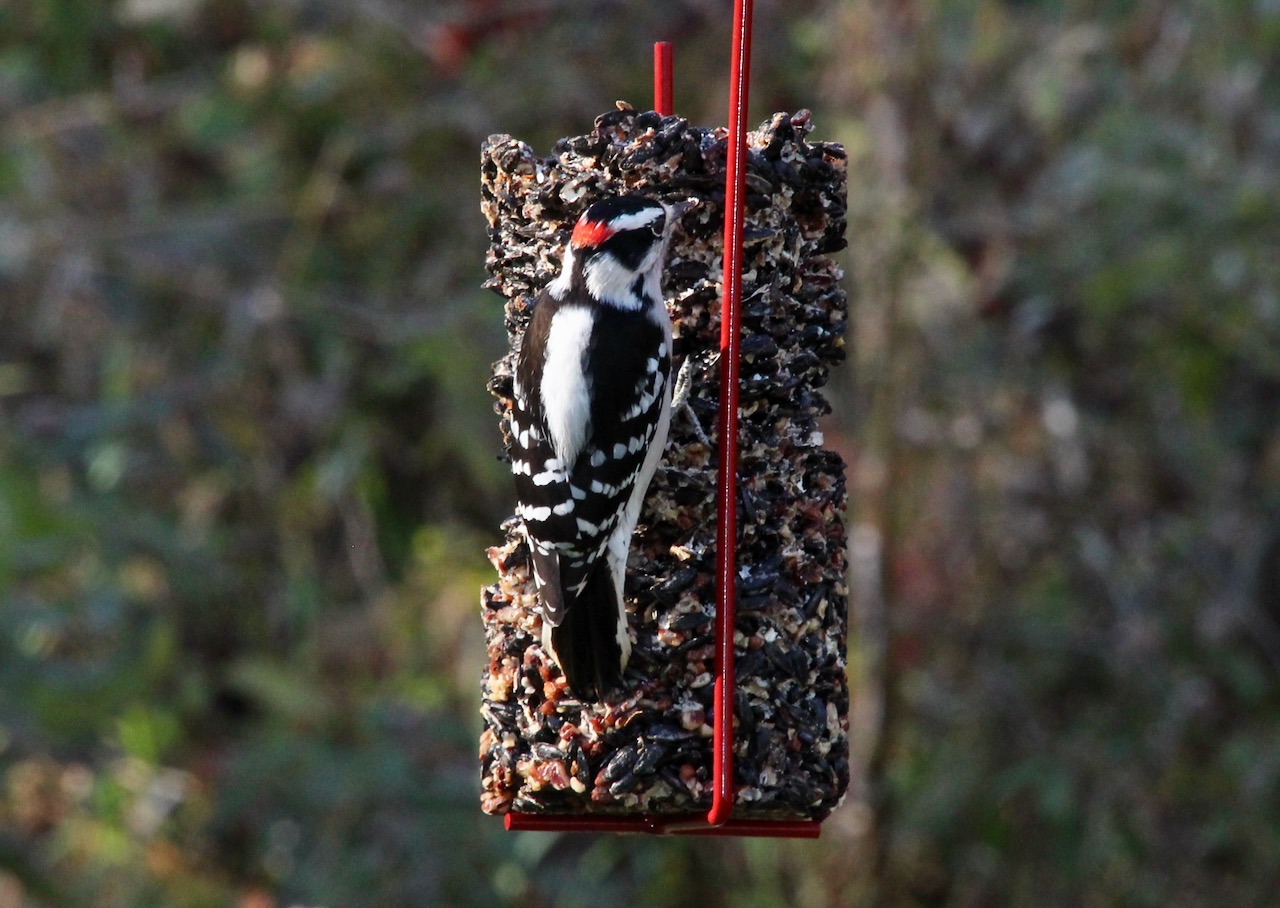 Love this photo of three birds, two real, on top of some feeders. That’s a female Downy and a female House finch. 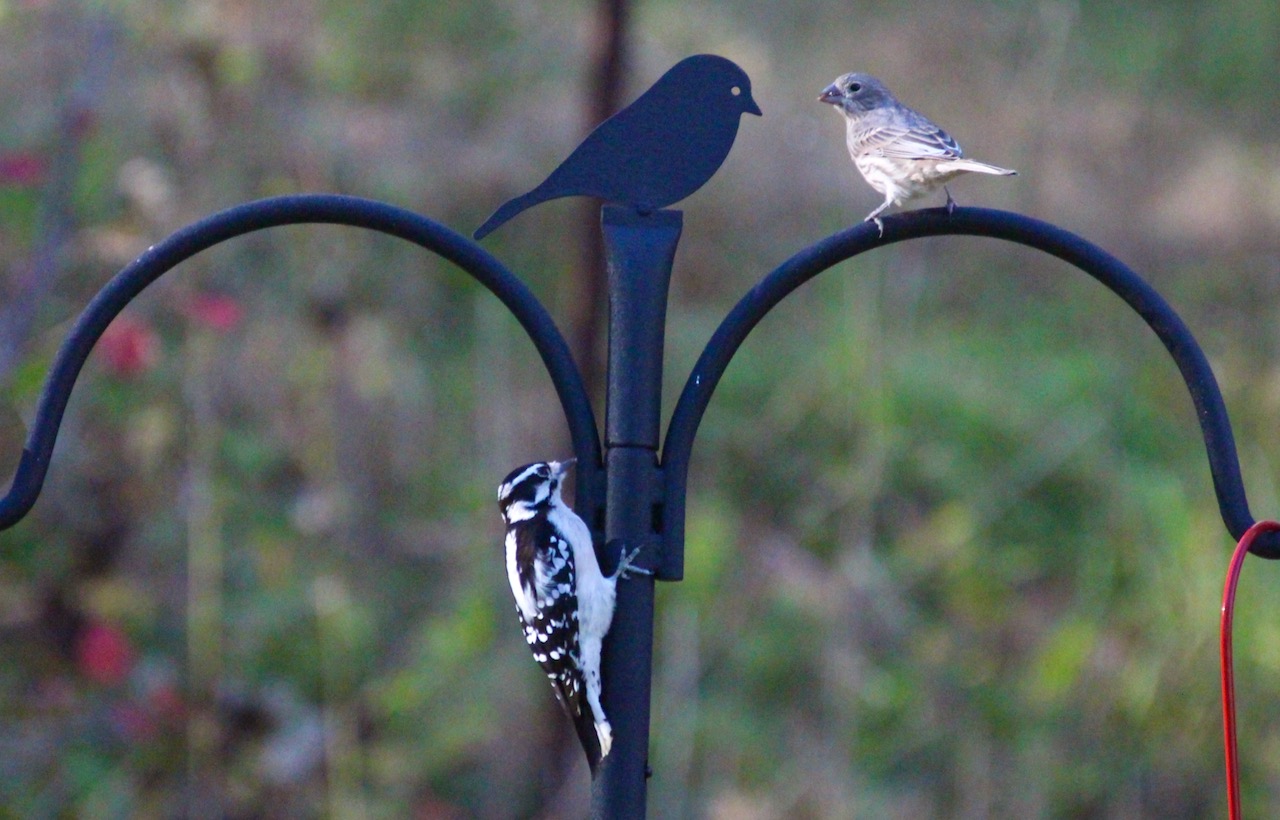 This Great Blue wasn’t in our yard, but we got to say hello while out walking the dogs along Black Earth Creek in Cross Plains. 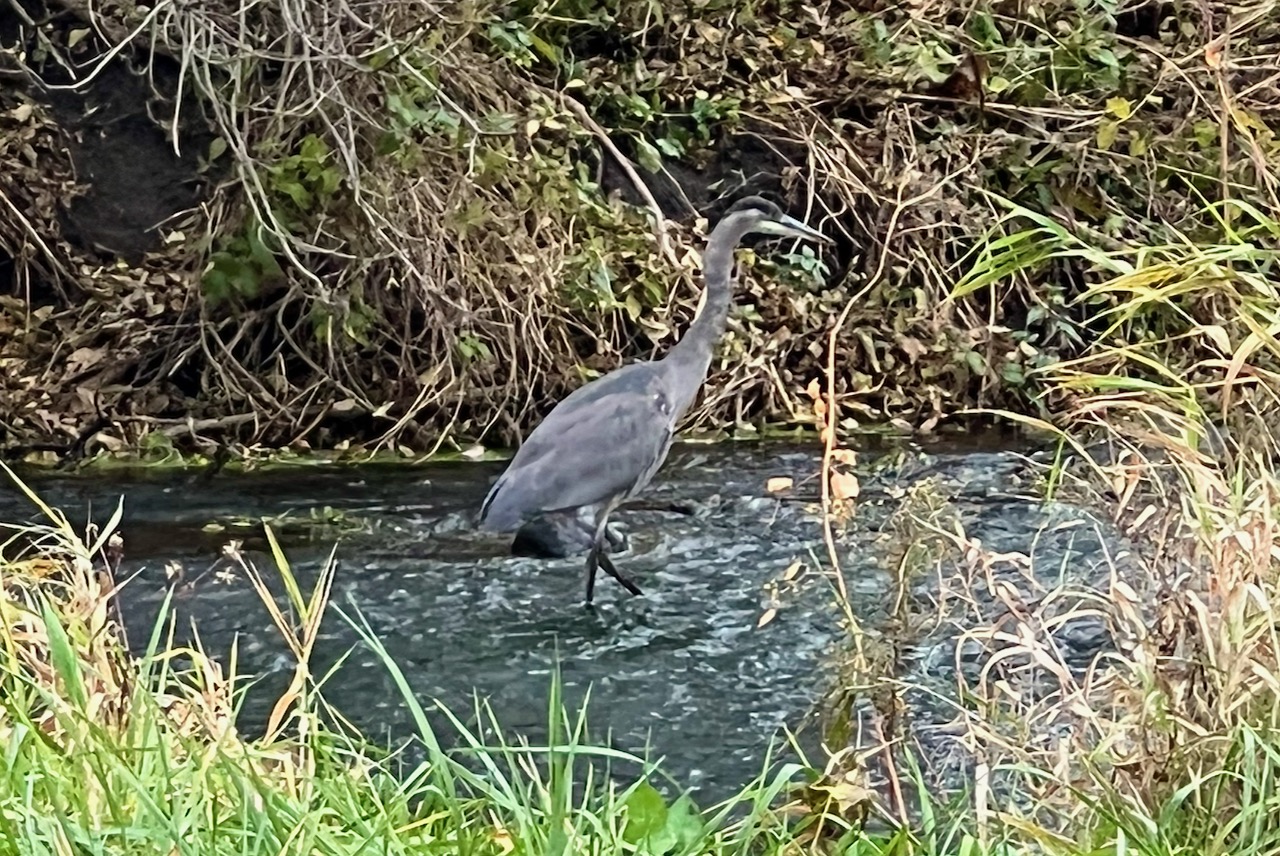 All of our wildlife encounters were not happy ones. This lovely thing was caught in our fence, probably for the better part of 24 hours. I found her when out walking the dogs, ran to get Jim and the bolt cutters. We got her out right away, and she moved a few feet away and lay down. She was gone the next morning. She will probably lose her hoof, if she makes it at all. I thought about bringing her water, she must have been horribly dehydrated after struggling for so long, but decided she’d be better off if I just let her alone. I thought about her all weekend, still do. I hope she makes it. 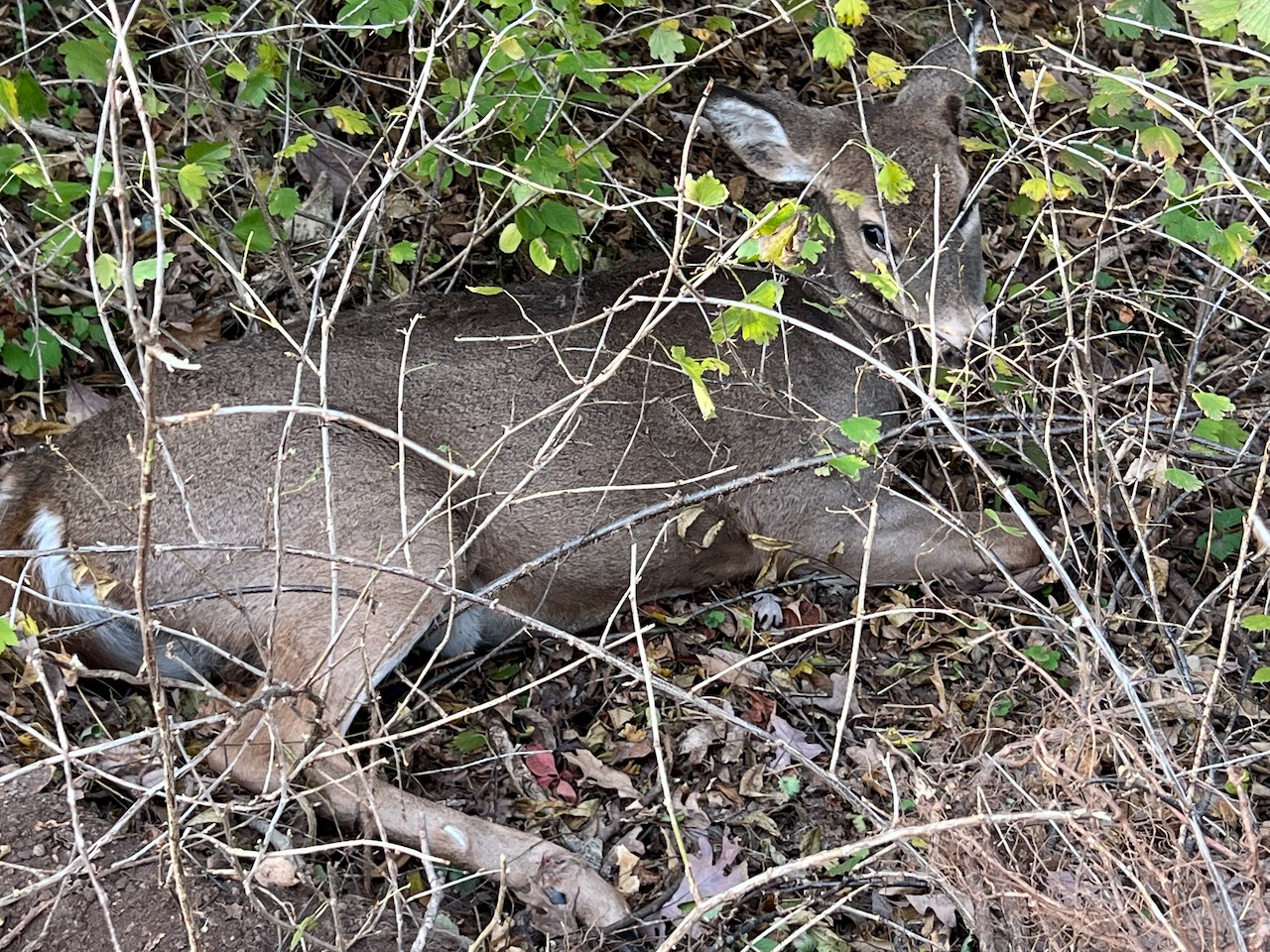 Watching the deer here brings me full circle–I’ll never forget coming back from safari in Africa and exclaiming how beautiful our White-tailed Deer are. That’s one of the many values of traveling to other countries, and being connected to others outside of our small, local circles. I hope I hear from many of you about translations and dog books in other countries, with apologies that I am only fluent in English . . .  and that’s only part of the time.

14 of The Queen’s horses to be offered this week