Laura Fry is the late Olympic dressage rider and trainer, whose daughter, Lottie Fry, was crowned world champion in 2022. Laura Fry died after suffering with breast cancer on Wednesday 26 September, 2012, at the age of 45.

Laura was born in 1967, and was involved with horses throughout her life, but it was winning the H&H “Search for a Star” competition in 1988 that launched her dressage career. She started training with Sarah Whitmore, and took over the ride on the chestnut gelding Quarryman, who was to become her most significant equine partner throughout her international career.

Laura and Quarryman were selected for the British young rider team in 1988, also winning the advanced medium national title that same year, before making their international CDI debut.

In 1991, Laura and Quarryman competed on the British team at the European Championships in Donaueschingen, Germany, alongside Jennie Loriston-Clarke, Tricia Gardiner and Carl Hester. The pair also won the grand prix national title that same year.

In 1992, Laura and Quarryman were selected for the British Olympic team, riding at the Barcelona Games alongside Carl Hester, Emile Faurie and Carol Parsons, with the team finishing seventh.

The pair were then selected for their third consecutive senior championship team in 1993, being part of the historic silver medal-winning team at the European Dressage Championships in Lipica, Slovenia, alongside Richard Davison, Ferdi Eilberg and Emile Faurie.

Laura and her husband Simon’s daughter Lottie was born in 1996, the same year that Quarryman was retired from sport. Laura continued to ride and train, running the family’s competition centre in East Yorkshire, Fry’s Dressage. She produced many more quality horses, including Massenet, Ghandi and Remming (pictured with Laura below), and also became a British Dressage List 3 judge.

Laura also trained her daughter in the sport, with Lottie starting her own competitive career in 2006, aged 10, and riding for Britain at the pony Europeans in 2010 on Andexer.

“When I first registered with British Dressage, I wanted to be Lottie, but it meant both my mum and I would be L Fry, so we settled on Charlotte,” Lottie told H&H, having re-adopted “Lottie” as she grew up.

Under Laura’s guidance, Lottie went on to compete on numerous British teams at pony, junior and young rider level.

“From the first moment I can remember there wasn’t anything else [but dressage],” Lottie said. “When I was very young, I didn’t realise what my mum was doing as it all just seemed normal. It wasn’t until I got older that I realised how lucky I was to have that kind of training and influence.

“The thing that influenced me the most was her work ethic,” added Lottie. “She worked so hard for what she did and she loved the horses so much. That’s really rubbed off on me I think.” 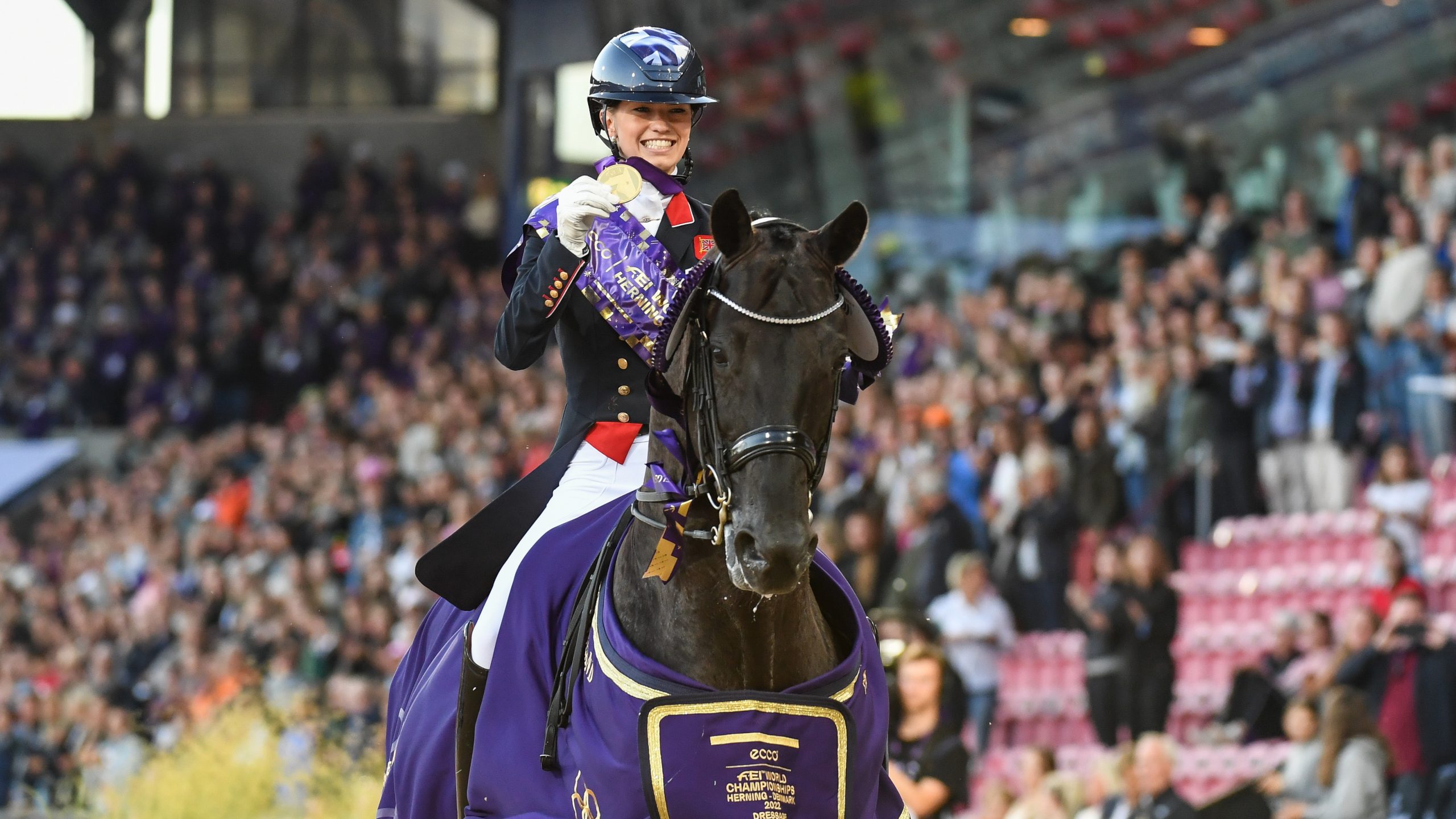 Lottie Fry and Glamourdale take individual gold in the grand prix special and the freestyle at the 2022 World Dressage Championships.

In 2010, Laura was diagnosed with breast cancer, but continued to ride, train and compete successfully over the following two years. In April 2012, she was prix st georges runner-up at the Winter Dressage Championships, riding Remming. Her final competitive outing was the Somerford Premier League in late May 2012, also with Remming, but her health deteriorated over the months that followed.

At the National Dressage Championships in 2012, Laura was presented with the British Dressage medal of honour to thank her for her contribution to dressage over the years. She continued to train up until 19 September, before passing away on 26 September. Her funeral was held on 8 October 2012.

“Laura was a tremendous rider, top-class trainer and, above all else, a great supporter of the sport,” said a spokesman for British Dressage at the time.

“Her talent for teaching helped so many achieve in their quest for success while in running competitions for all levels she brought dressage to everyone.

“Laura’s life was one to be celebrated and she leaves a great legacy for us all.”

With all eyes on Tokyo, the young but talented Lottie Fry is a very real contender for the British dressage

Lottie Fry and Glamourdale take gold in the special at the 2022 World Championships.
Credit: Peter Nixon