Home » Dog » Thanks, However That is Sufficient! (Methods to Discourage Relentless Consideration Seekers)
Dog

Thanks, However That is Sufficient! (Methods to Discourage Relentless Consideration Seekers)


Let me start with a story, one that I relayed in Bark Magazine in 2005:

When I was taping the Animal Planet show Petline, a veterinarian-turned-sales-rep asked to borrow Cool Hand Luke for a demonstration on dental care. Luke and I had JUST finished a segment on how much dogs dislike being patted on top of the head, and had directed the audience’s attention to Luke’s look of disgust when we did it to him. Sure enough, after jerking Luke’s mouth open several times (as though she were cleaning clams), the woman said “Thank you, Luke,” and gave him three short, bouncy pats on the top of his head. We had to stop taping because the camera crew was laughing so hard they couldn’t continue filming.

The fact is, people just love to pat, pat, pat dogs on the top of their heads, and most dogs either hate, hate, hate it, or, at best, tolerate it. (Of course, as always, there are exceptions, as anyone with a stereotypical Golden Retriever knows.)

Beyond teaching that head pats are NOT positive reinforcement to 98% of the dogs in the world–which EVERY dog training class should include–we can use this knowledge to our advantage. Do you have a dog who sits at your feet and demands that you keep petting him, no matter how long it’s gone on already? Just try what my sister, Liza, (who had come to watch the Petline taping), and I now call “happy slappies.” You simply intentionally pat the dog on the top of his head, three to four times, and say “Enough.”When first training this, I include folding my arms and turning my head away.

Here’s a video of me illustrating it with Maggie; I’ve included all the cues I use when getting started to be clear, but all I need to do now is quietly say “Enough” to both Skip and Maggie, and they will go lie down.

Does this work first time every time on every dog? Let’s all burst out laughing over that fantasy. If only. But it’s amazingly easy to teach, dogs pick up on it very fast. Here’s what I think makes it work so well: First, dogs really don’t enjoy being patted on the head, just as children don’t like it either. (Neither do I. Have some one do it to you and ask yourself how much you enjoyed it.) But, unless you get carried away (please don’t), it neither scares dogs or intimidates them. Second, turning the head away is an ethologically relevant signal to dogs. Dogs to it to other dogs to signal “I’m done interacting with you now.” That makes it a clear, salient signal, sort of like saying “Well, sorry, gotta go” to a friend.

So often we humans make the mistake of doing the opposite. We look right at our dogs and say “go away” or “that’s enough,” and the dog stares back, just sure that our gaze is an invitation to continue thrusting their head into our lap to remind us to keep petting. I should add that I don’t know if there is any effect of withdrawing your arms, but it does seem like it could be seen as another signal of withdrawal.

Here’s what you need to do to get this started: Wait for a time that your dog is soliciting attention, and you’d like it to give it a rest. Slowly (don’t frighten), move your hand over the dog’s head, and pat pat pat three to four times. Then, withdraw your hand, fold your arms and look away. LOTS OF DOGS WILL IGNORE this the first time! Expect that. After all, how long have they been successful at getting more attention when you were done petting them? Because really, you weren’t done, were you? You said “Enough” and then gave in and petted them some more, right? (I speak only theoretically, of course.) So, first, only do this when you are truly done for a bit. If/when your dog ignores you and continues to beg for petting/treats/another throw of the ball, just repeat it as described. If the dog is super pushy, I’ve tried standing up and it’s worked well.

Usually, the third time is the charm, if you even need to do that many. Very soon, most dogs will just go away after they hear “Enough.” (If you’ve used that word for years and your dog has learned it means “just try harder,” then choose another word!)

I started using this when Tulip, our beloved Great Pyrenees, kept slapping her massive paw into the laps of our visitors. They’d say, “Oh, I don’t mind” when I told them to just say “Enough,” but they’d never do it. After 30-45 minutes of “I don’t mind,” their smiles would freeze and you could tell that they REALLY DID. So, I added in the head pats, the ones people do too often to dogs, and my visitors got it immediately. Just another example of thinking about the natural behavior at both ends of the leash! Voila! (Or, as I wrote once to Karen London when we were working on another one of our co-authored books together, Viola!)

What about you? How do you gently and effectively discourage begging for more treats, petting, or play? Ever tried what I’m describing? I had a video of teaching it to a dog for the first time–it was great! And, I can’t find it. Sigh. It included a super pushy, young Border Collie who got it on the third try. He might have gone off to get petted by someone else, I don’t remember. But it’s a common enough occurrence if you have company. Bo Peep used to work the crowd, one at a time, then, finally lie down after trying all possible options.)

MEANWHILE, back on the farm: After two months of almost no rain, it poured, and hailed, and blew like a banshee–all on a three-day sheepdog trial. The kind in which I wonder what the hell is wrong with me for choosing to spend two days like this . . .

. . . instead of lounging on a cozy couch cuddled up with Jim and the dogs. Skip ran twice, ran waaaay too wide on his first run and ran out of time on the drive. His slow, cautious lift, appropriate for herding deer perhaps, took forever. I’m calling it the ETERNAL LIFT, although it sounds like a skin cream I should be using.

He fixed it on his second run, doing a gorgeous outrun, perfect lift (yes!), and fetch, but got stalled out on the drive. The sheep were extremely hard to get moving in the right direction on the first leg of the drive, although there were certainly several teams who got it handled. (And more who did not.) Skip got stuck on the pressure and would NOT walk up directly toward them when I needed him to. I did my best to encourage him but finally left the post to help him because he clearly needed it.

On Sunday both Skip and Maggie got to work setting out sheep for the Novice class. Most of the time it’s easy work, but there are enough times that the sheep challenge you to keep a dog on their toes. All three of us had a great time; Skip made up for getting stuck on Saturday by brilliantly handling a lamb who refused to move and butted toward him, two inches from his face. Skip made an air nip, no contact, and stared her down, keeping his cool, but not backing away. It was elegant work and it made my heart all gooey for a moment. And no rain on Sunday! What a luxury.

I took some photos last week when working the dogs at home. Here’s Skip after coming out of the water tank, making it clear he’s ready to work again. 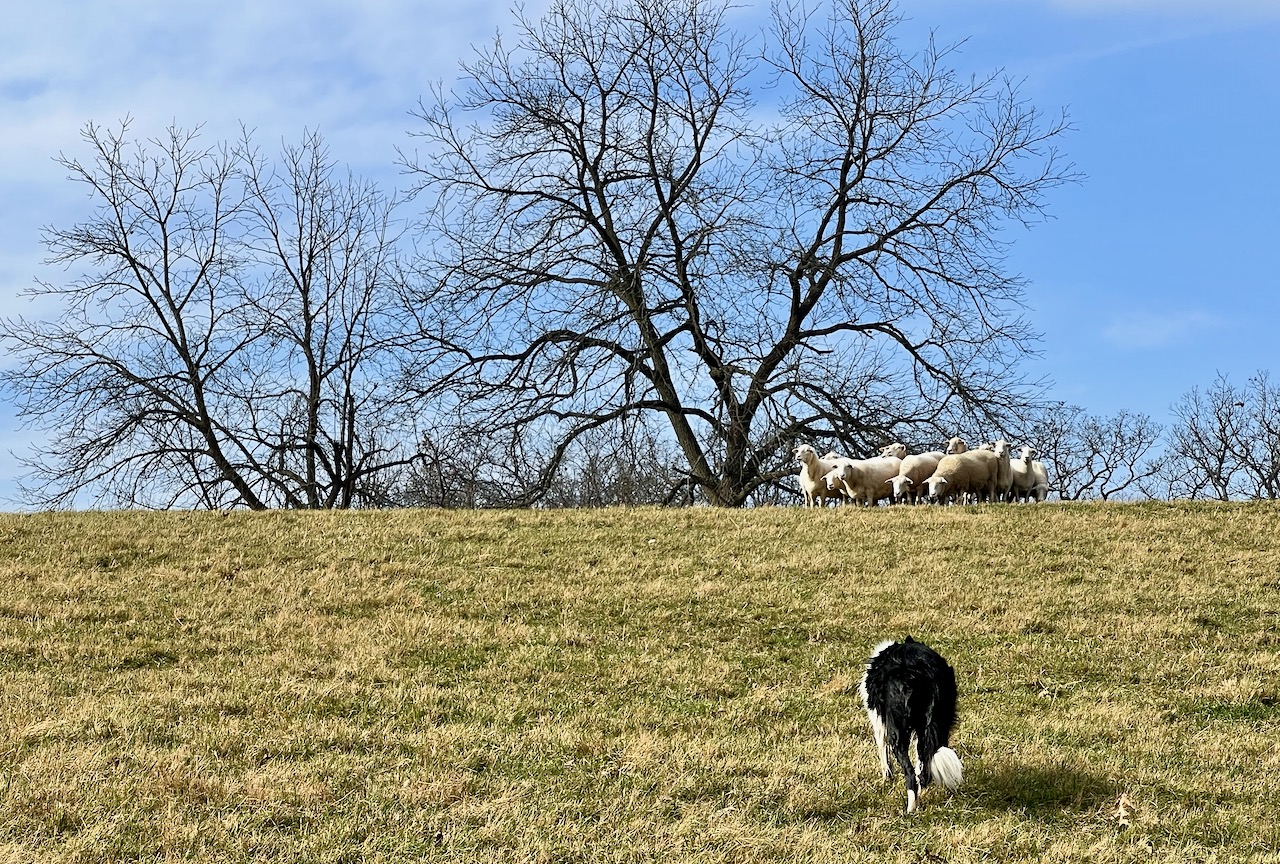 And here’s Skip saying “Are you going to put that thing down and get back to work with me or what?” 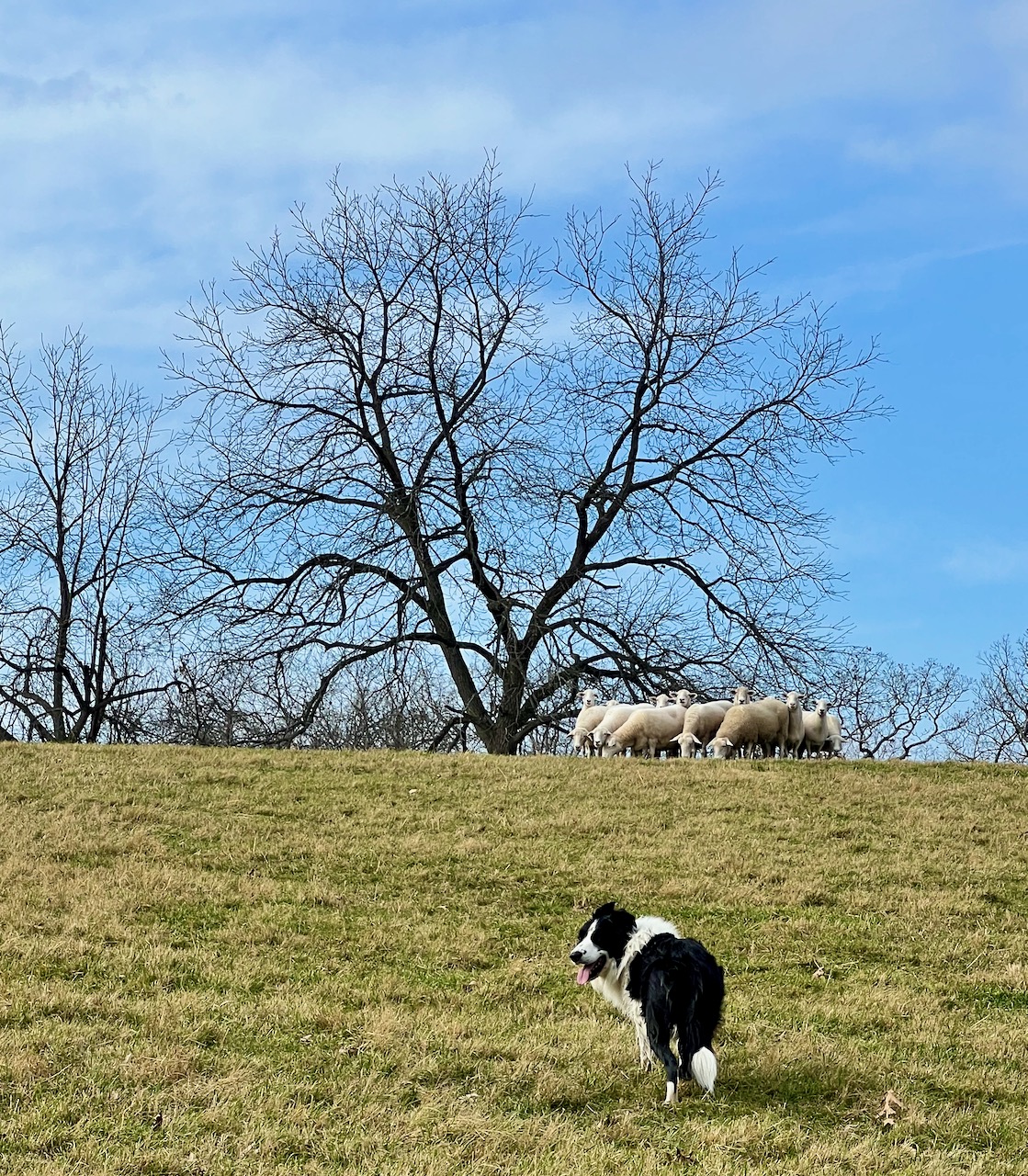 The sunset colors were amazing last week at the farm. You’d think I went crazy with color editing, but honestly, this is very close to what it looked like. It was surreal. 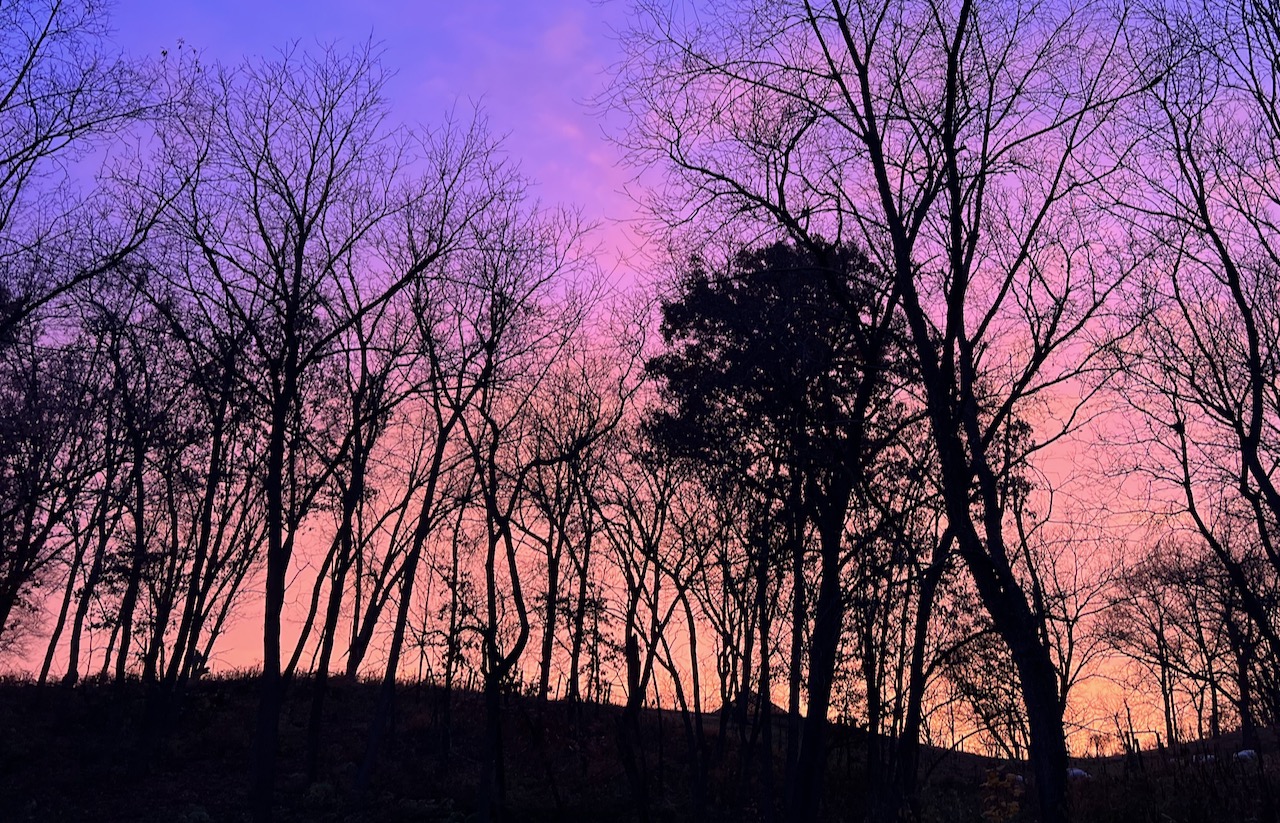 Although I’m appalled at advertisements for Christmas already, I admit to starting on some of my holiday cooking last week. I make homemade ketchup every year, as part of a goody bag Jim and I made for friends; here’s the first batch of ketchup in these way cool bottles I found. The hardest part of making the ketchup is getting it into the bottles; the kitchen looks like a scene from a horror movie by the time I’m done. 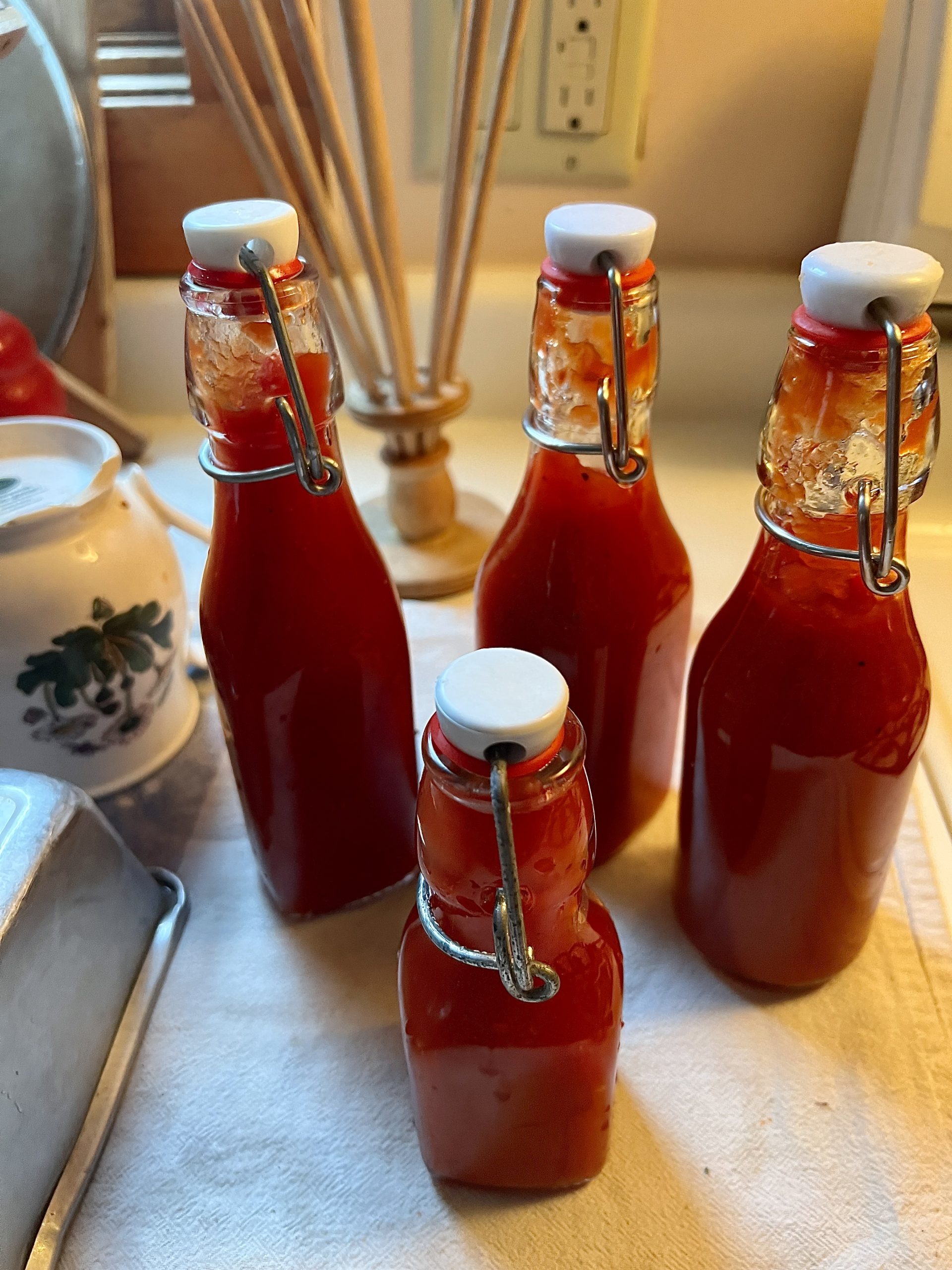 I’d say “Happy Slappies” to you all, except, wait, I don’t want you to go away! Writing this blog takes a lot of time, and friends often ask me why I don’t stop. Answer: Because of you. Seriously. I love this international community that has been growing and evolving since 2008. (Fourteen years, oh my!). I love reading your comments, learning from them, and hearing about your dogs, some of whom feel like old friends. So join the party and let us know how you deal with dogs who are pushy about getting attention; we promise not to slap our muddy paws in your lap when you’re ready to do something else.