stroll the hardest grand prix on the earth


The tracks for the annual CP International grand prix presented by Rolex at Spruce Meadows, Canada, are widely acknowledged to be the toughest in the world and, with $3million in prize-money on offer, it’s no wonder an elite field of showjumpers flock from across the globe to take on the immense challenge. Past winners over these unique showjumping fences include Eddie Macken (Boomerang), John Whitaker with Milton, and Eric Lamaze riding Hickstead.

Regular course-designer Leopoldo Palacios is the master of design, setting three tough but fair tracks to whittle down the 40 contenders. The top 12 riders progress to the full-length second round, before a shortened jump-off course for any combinations who manage to jump double clear – and those are few and far between.

The dimensions of the showjumping fences are breathtaking, with verticals towering to 1.70m (5ft7in) and spreads stretching to 2.10m (just under 6ft11in). But the tight time allowed is always a huge factor, especially in the vast expanse of the Calgary turf, and there are plenty of decisions to be made on stride options along the way.

Venezuelan course-designer Leopoldo Palacios explains: “I never like to build courses that don’t balance, so if I include a long distance, I will also include a short distance, and then a normal distance. In this way, the course will appeal to all of the horses and riders,” he says.

Visually, too, the jumps are spectacular, with many brought in from previous championships and Olympic Games. Horses are expected to sail over everything from a train to a bicycle, past swans and over a vast open water, as well as the venue’s notorious double of Liverpools. The technicality of this year’s track had been increased significantly due to the high calibre of entries.

Here we walk you through just some of the key challenges seen in this year’s CP International presented by Rolex at Spruce Meadows.

CP International grand prix: round one

Horses and riders faced two sizeable oxers to start with, followed by this light and airy windmill fence at three (above), before a turn back to the striking Beijing wall (below). 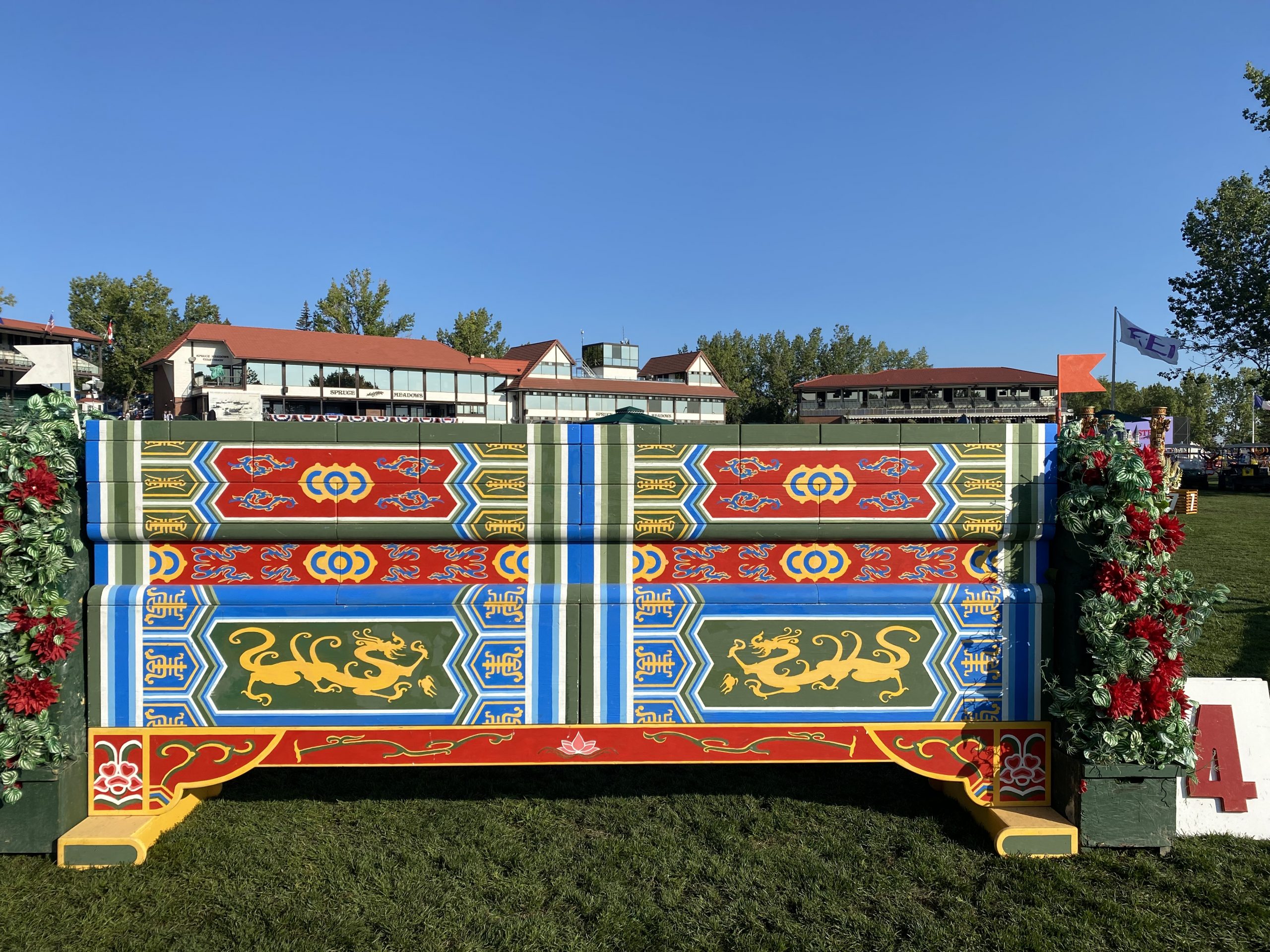 Competitors were then encouraged to open up for the vast water jump at fence five, which unusually featured a bendy serpentine wall on take-off. 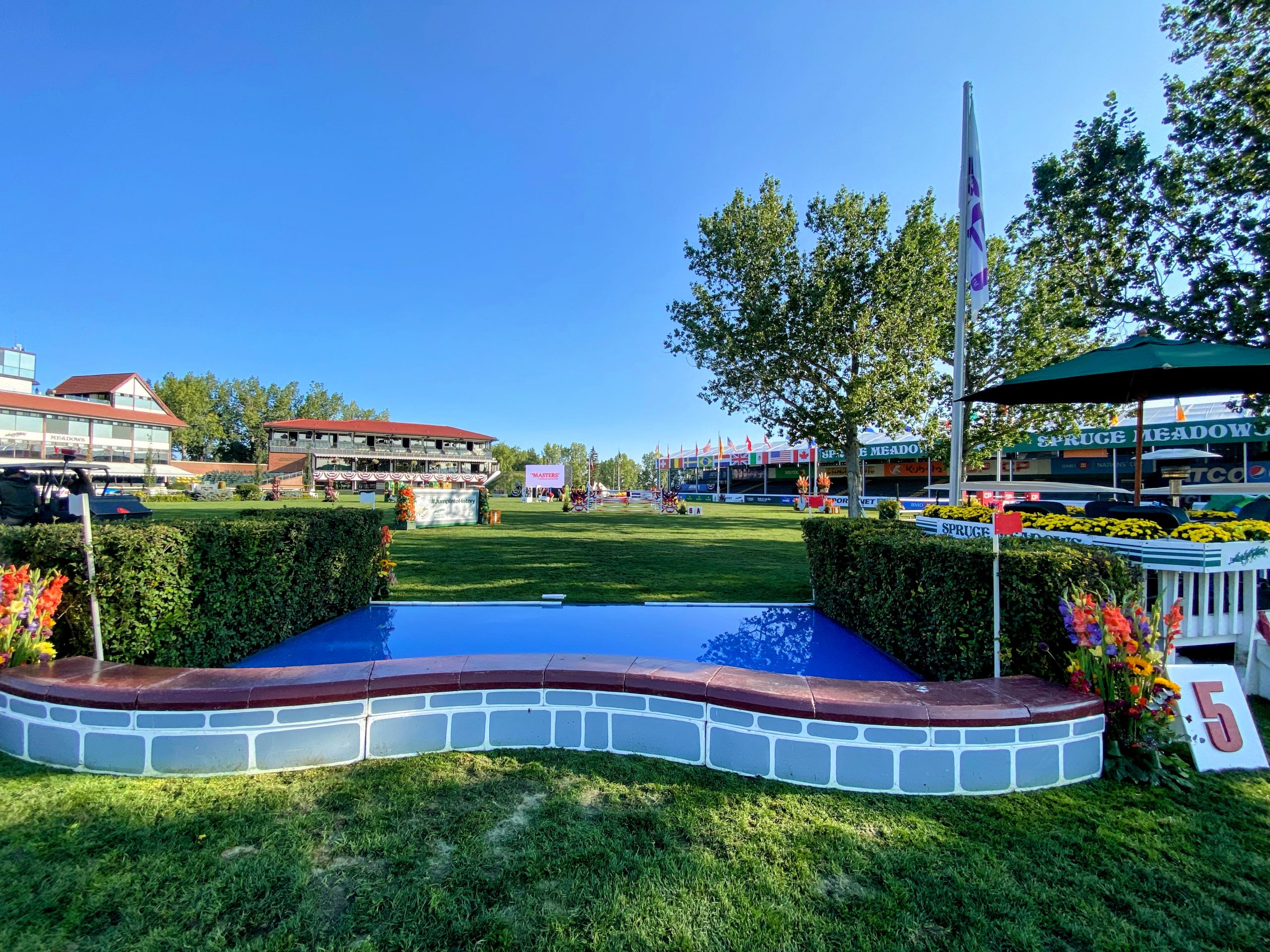 We then went from one extreme to the other – continuing the line across the arena straight from the water jump, horses and riders then had to negotiate a vertical-vertical-oxer treble combination (pictured below). Traditionally all the elements of doubles and trebles are built out of the same materials and colours, but the Spruce Meadows team have been experimenting with different colour combinations and these Tokyo-inspired obstacles were red and white, followed by blue and white, then orange and white for a really dazzling effect. Plenty of riders came unstuck here. 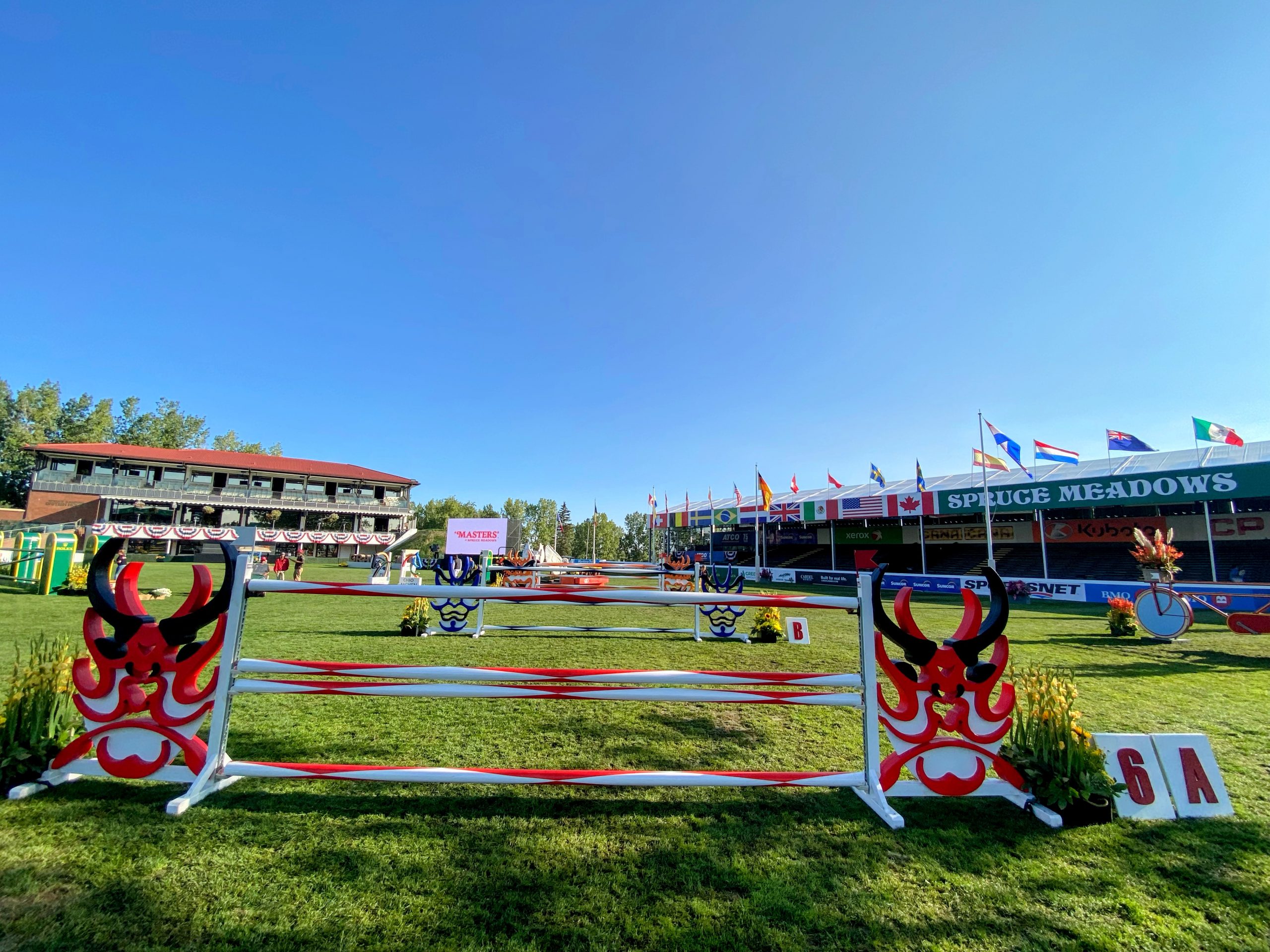 Round the bend, horses were met with a vertical over a huge dry ditch – filled with gravel – at fence seven (pictured below). Horses’ eyes are naturally drawn down to the ground at fences like this, which makes it easy for them to tap out the top rail. 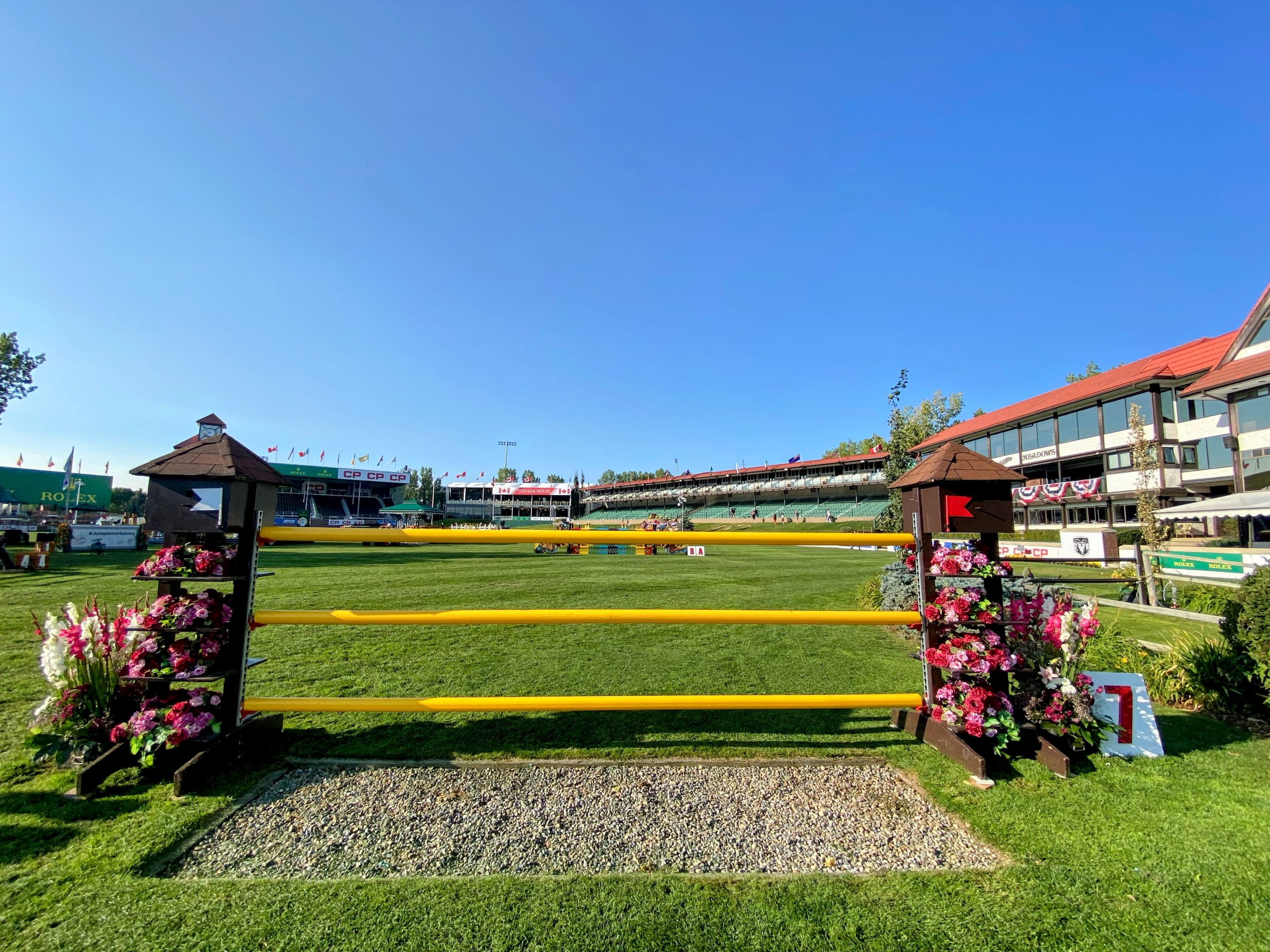 After a colourful double at 8a and b, with an unusually short one stride (just 7.60m), slightly uphill, between the vertical and a 1.70m wide oxer out, it was on towards the in-gate and Spruce Meadows’ iconic clock tower for a skinny vertical at fence nine (below). The white gate at the base of the fence draws the horse’s eye down again, and the top rail fell many times here. 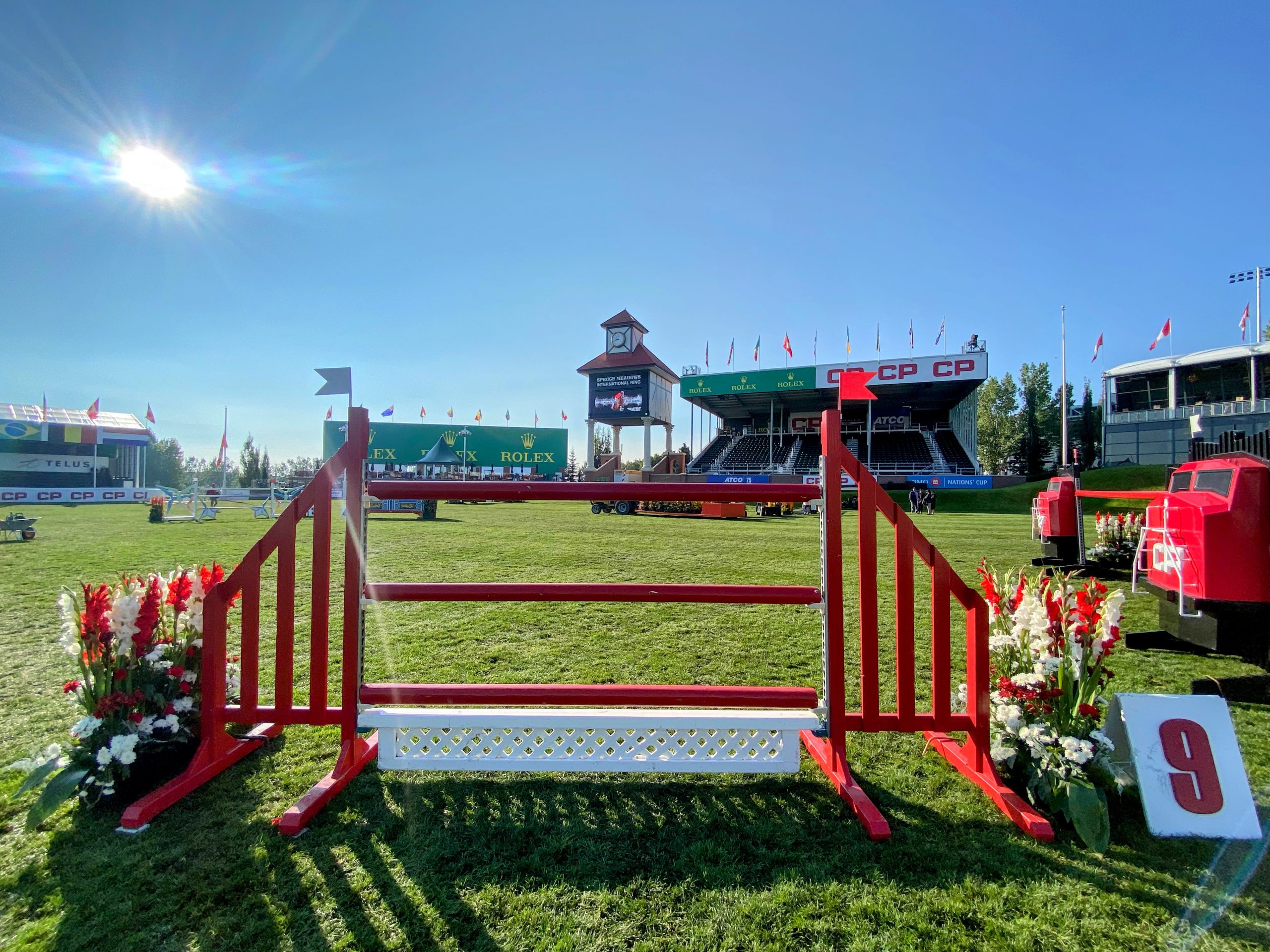 Fence 10, a triple bar, was relatively straightforward, off a bend (see below), but let’s not forget the dimensions here – it stretched a mind-blowing 1.90m wide. 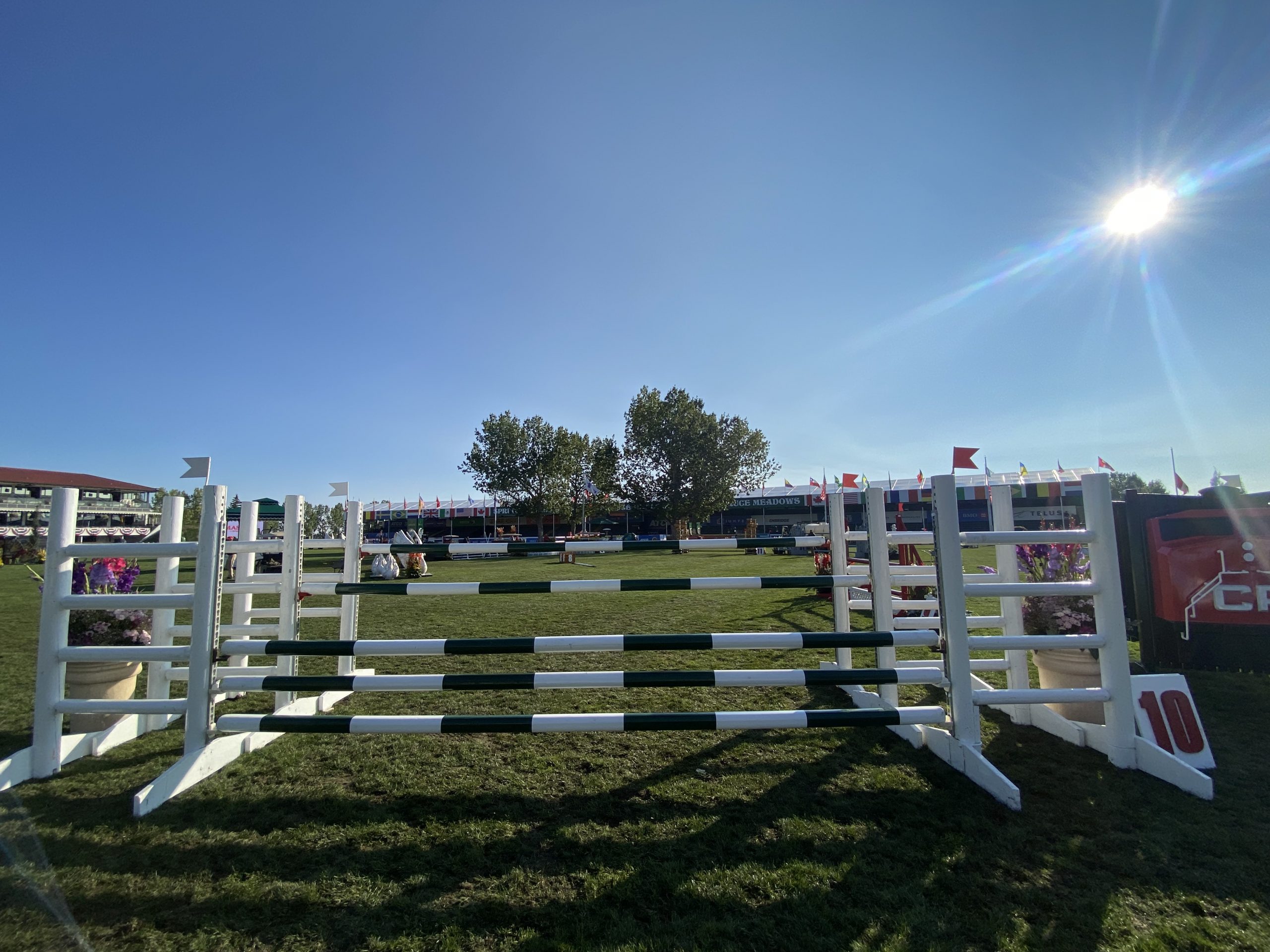 The designers then built for eight strides to an elaborate fence 11, encouraging riders to use this stretch to make up time, however they needed to think ahead to a very short four-stride distance (“really it’s just three strides” said the design team – and one combination did clear it in three) to the 1.60m skinny planks at fence 12 (below). 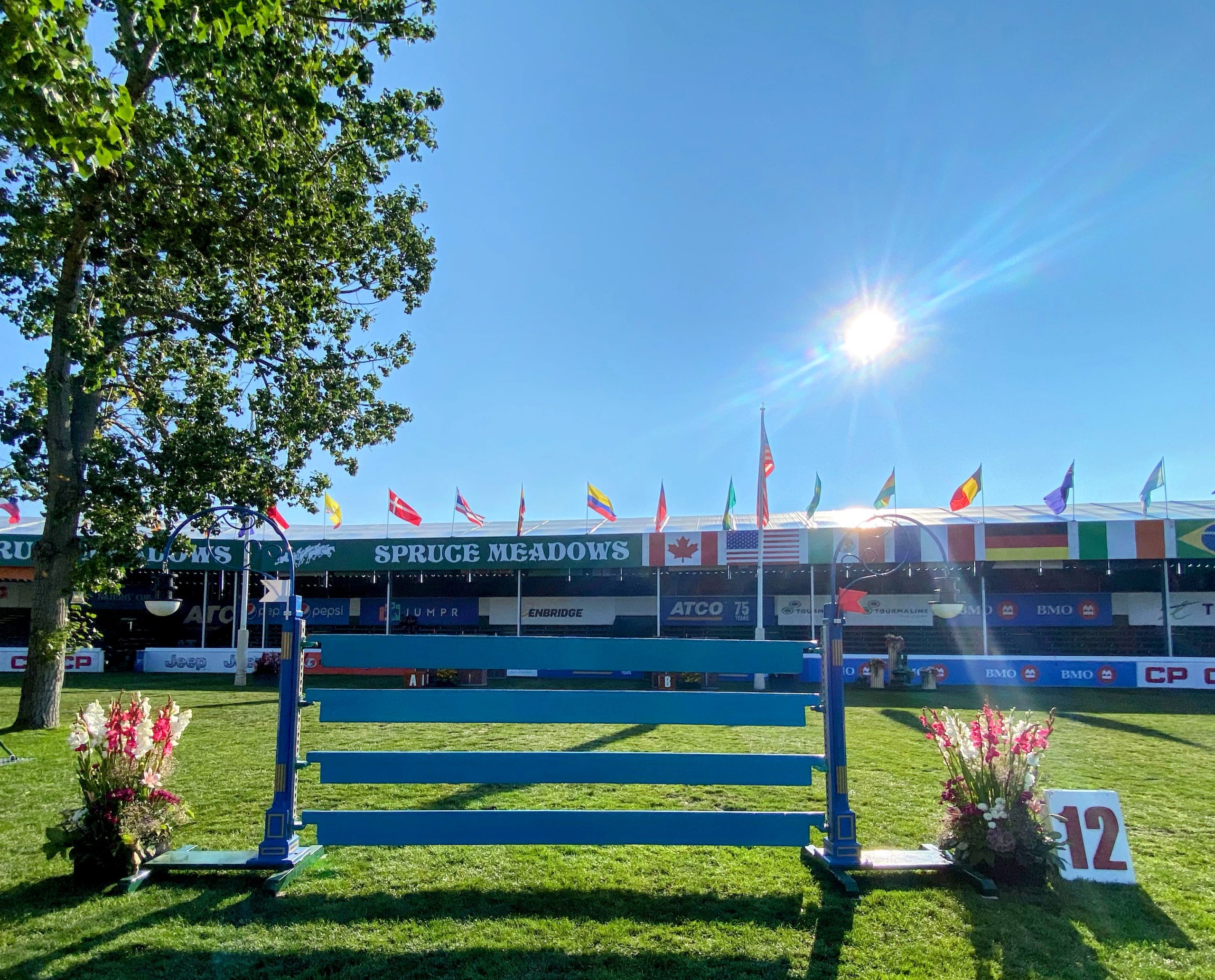 Then it was a left turn to the mammoth CP oxer at fence 13, 1.53m high and 1.85m wide (pictured below), with the delicate 1.65m Rolex vertical, the tallest fence on course, to finish. 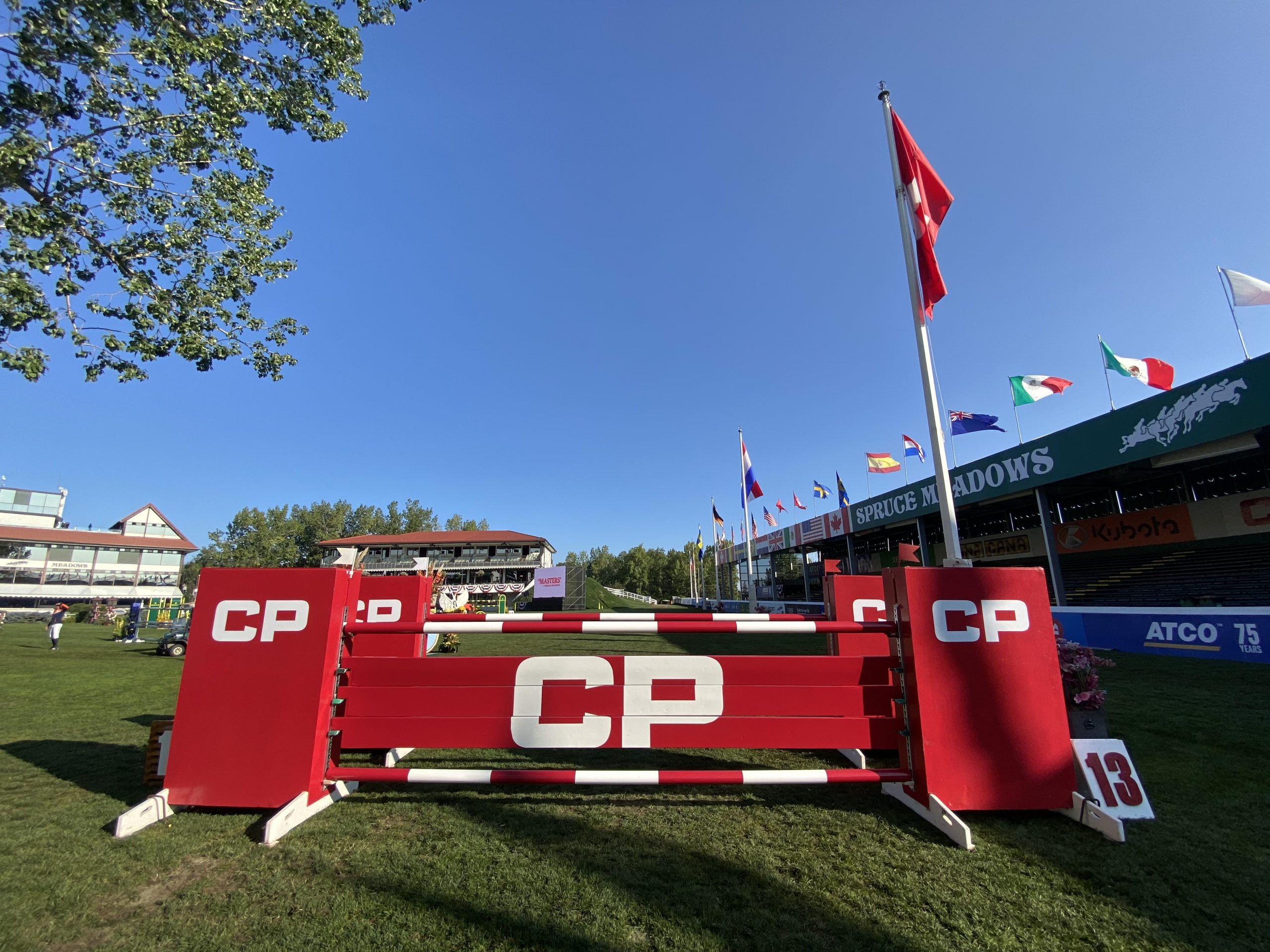 Coming early on this slightly shortened track for round two was this Rolex oxer with “pinstripe” poles (see below) – these horizontally striped poles are far more difficult to jump as horses find them harder to see and they can create an optical illusion. 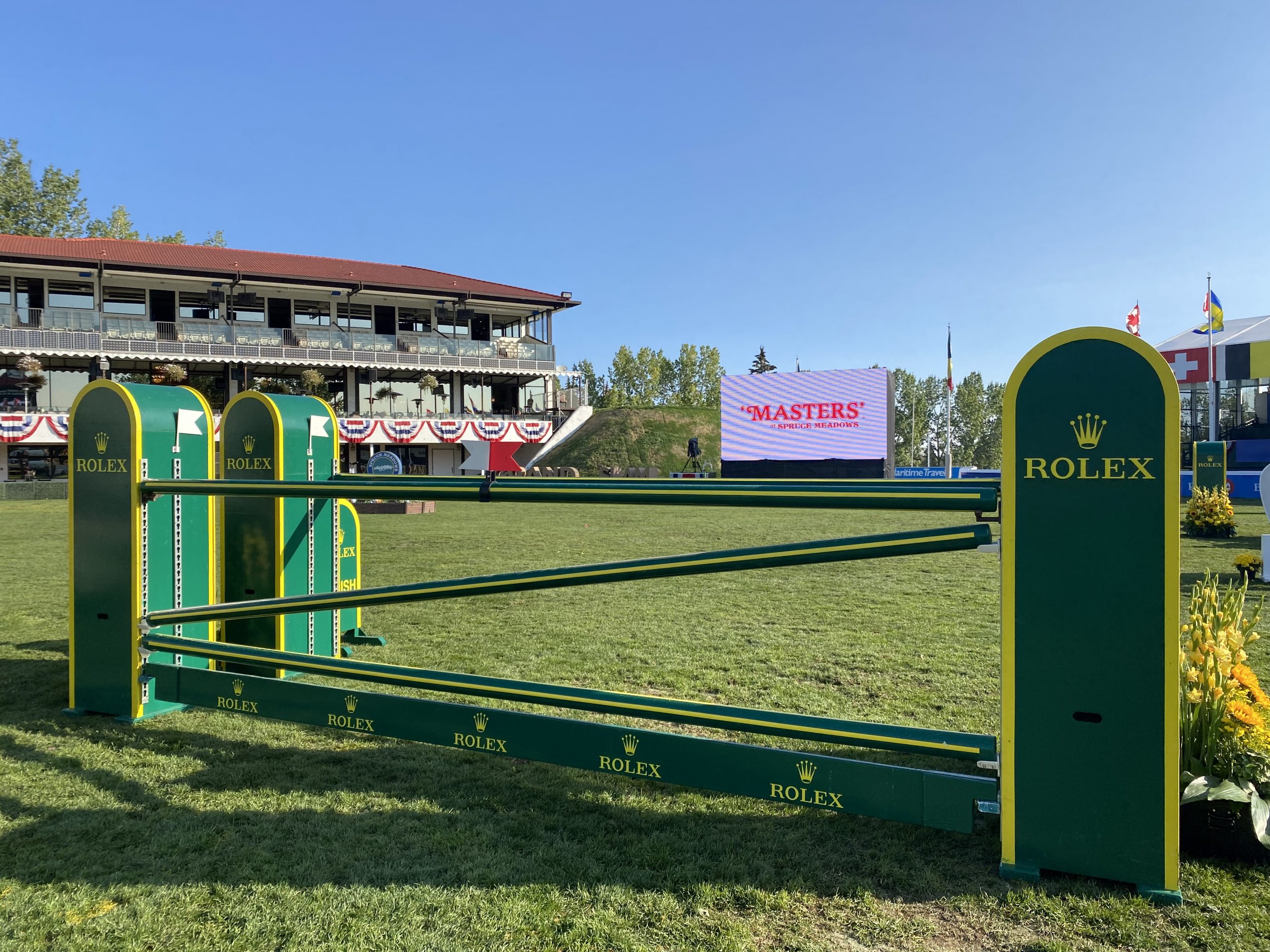 Riders are not fans of the world famous bicycle fence (pictured top), but it does tend to jump well. The approach this year was on either six or seven strides and although “not huge” this year at only 1.64m, it was heading straight towards the crowd so there was plenty to distract the horses.

Round the corner, was a fence rarely seen in grand prix competitions, an oxer-oxer one-stride double and it was constructed of red bricks and poles (see below), which horses also find hard to see. 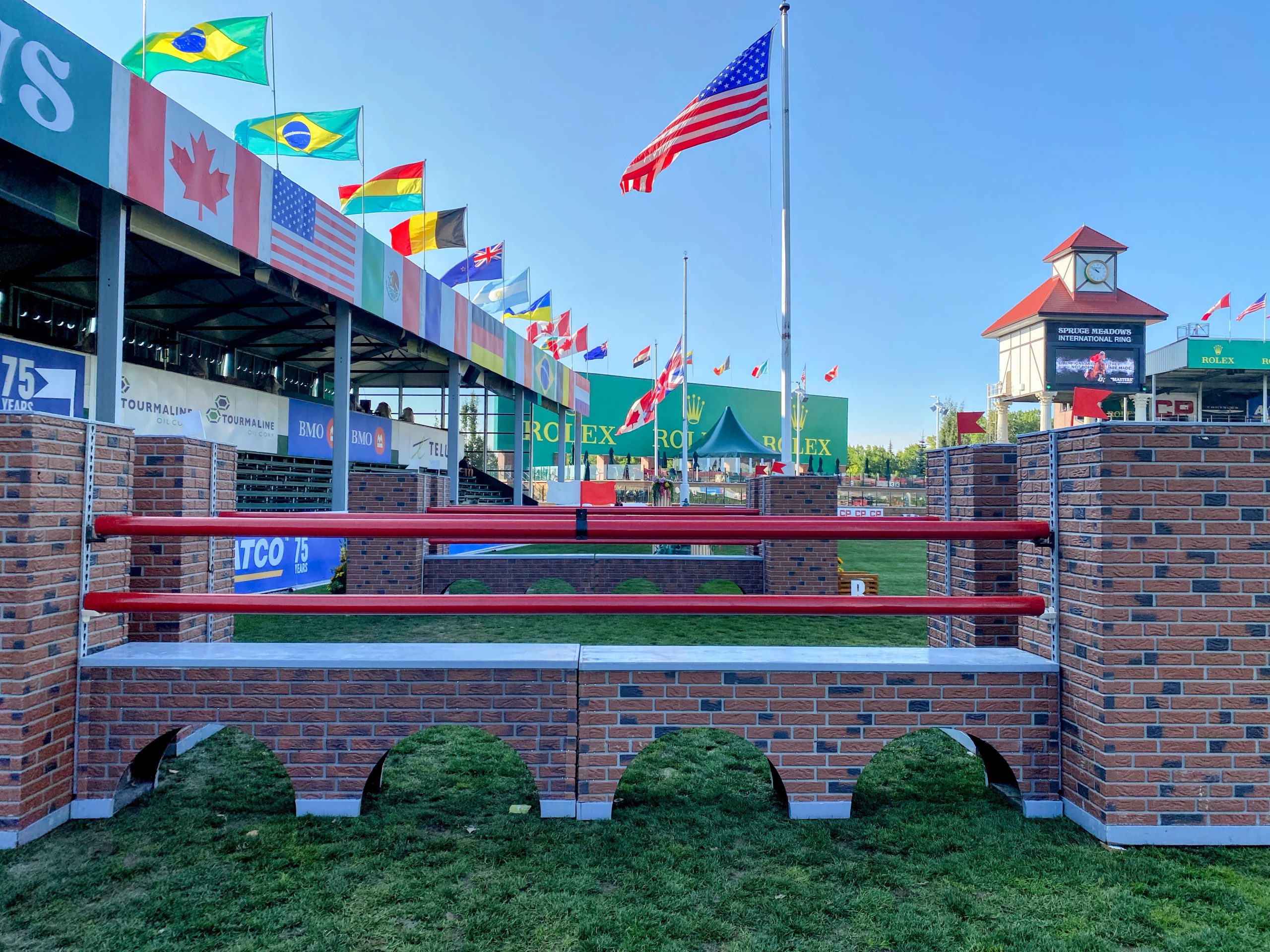 The Tower Bridge fence at seven (pictured below, complete with “River Thames”) was made famous at the London 2012 Olympics and it stood 1.59m high for round two of the CP International. 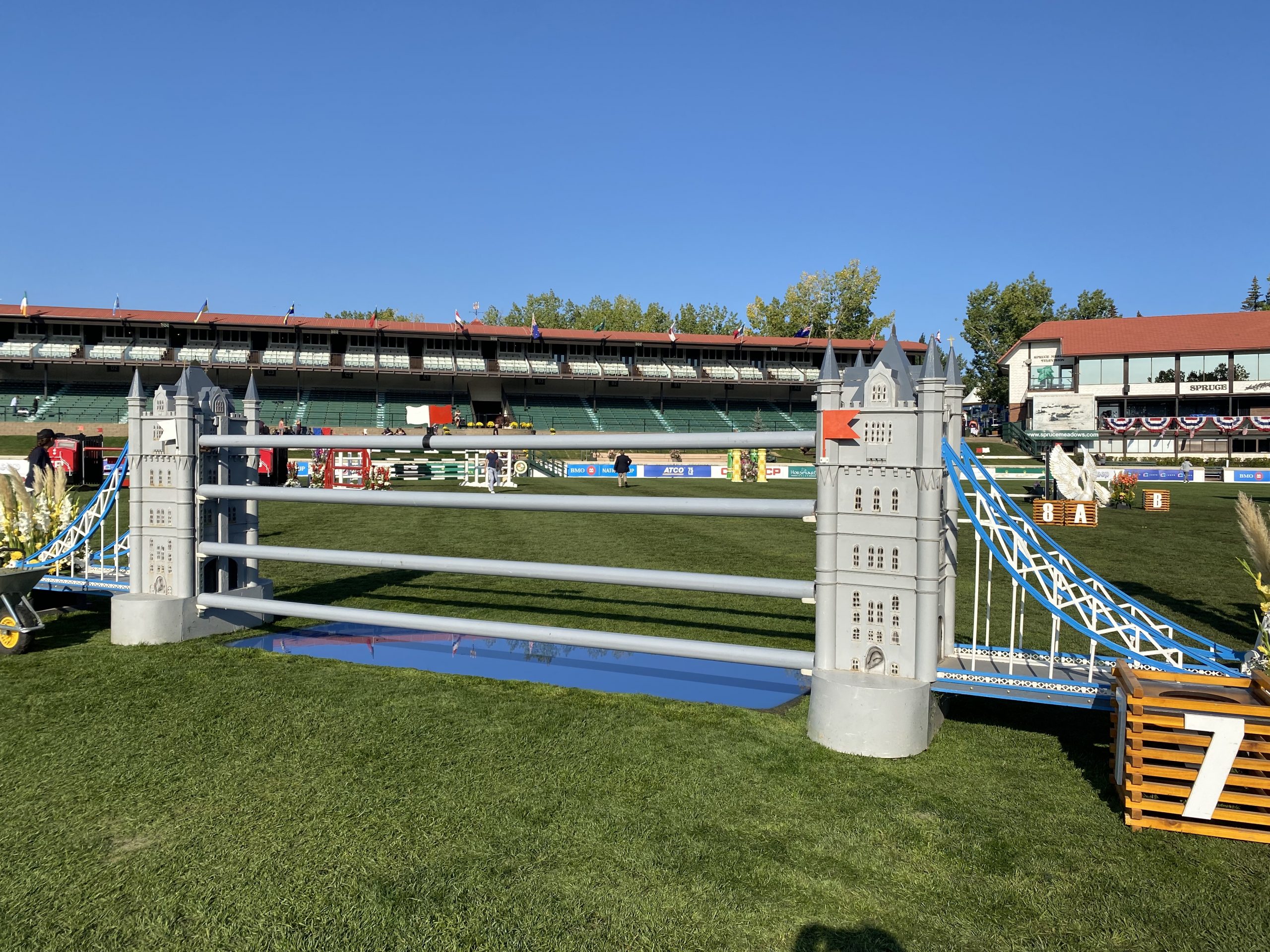 Many horses would run a mile at the sight of these swans (below) – one of a handful of fences brought in from the recent World Showjumping Championships in Denmark – but the double, sited 8m apart, was barely given a second glance by these top class equine athletes. 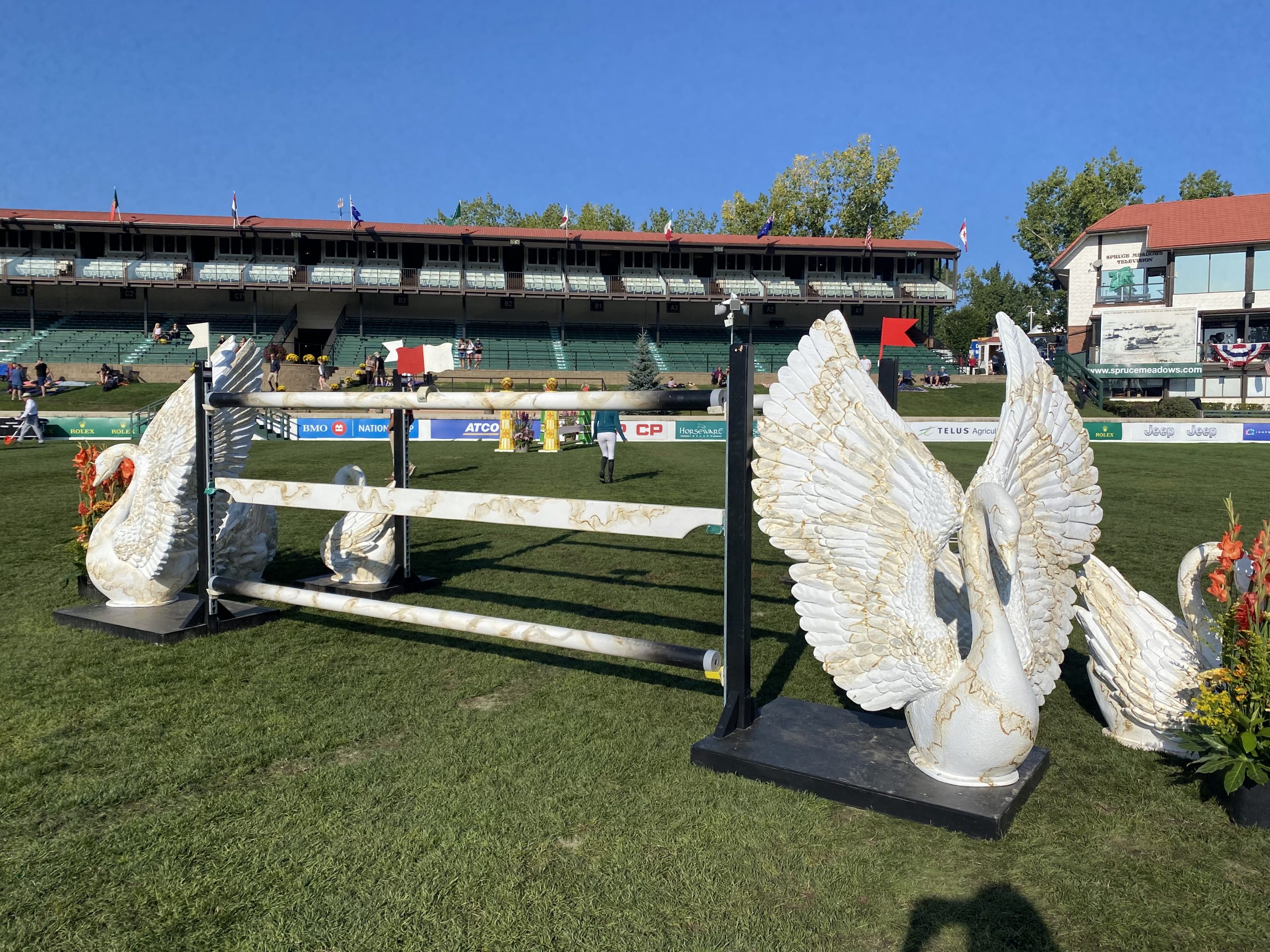 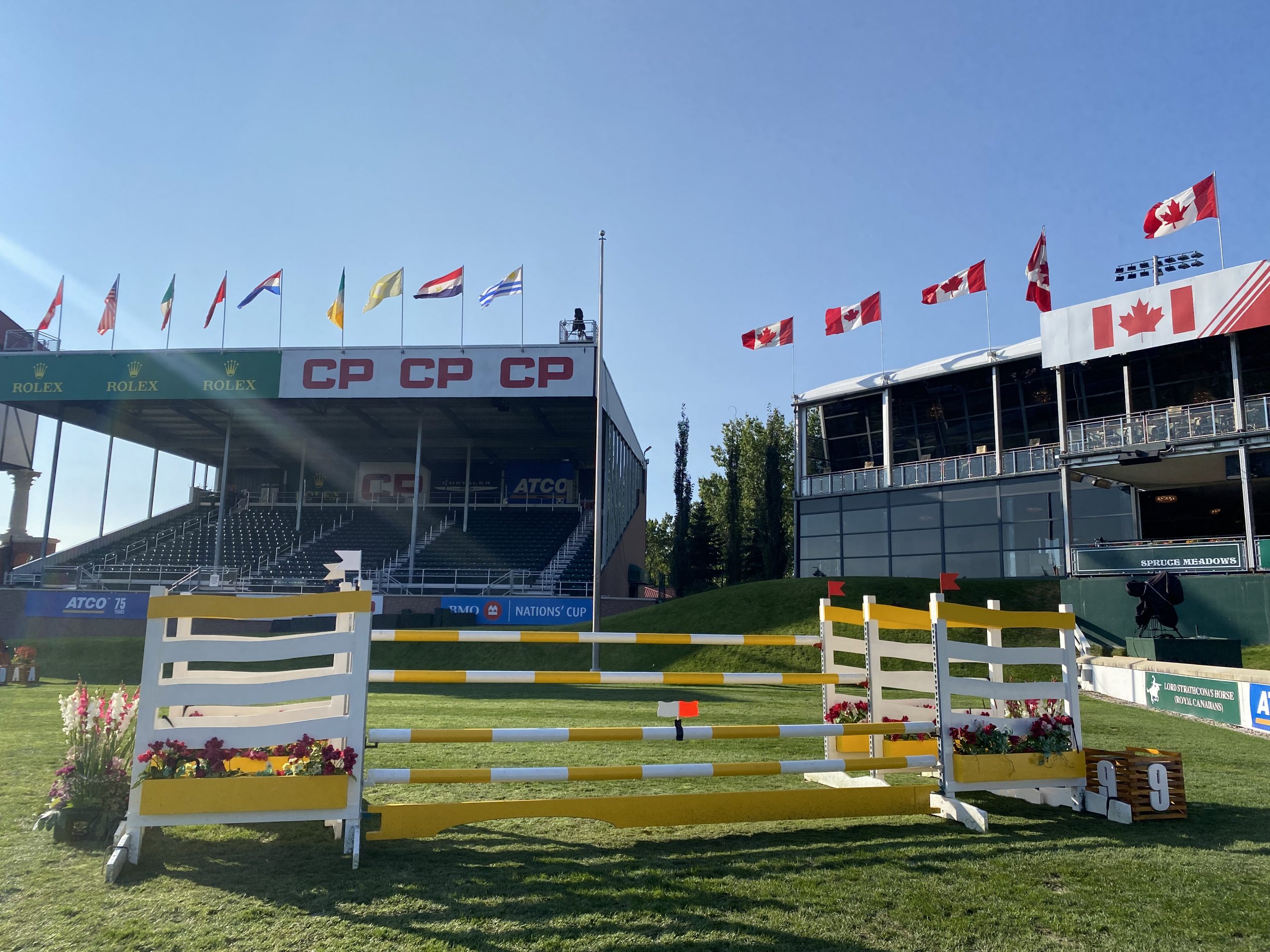 After another triple bar, this time 1.59m high and a breathtaking 2.10m wide (pictured above) – “one of the widest I’ve ever seen set on a course” said the design team – came the renowned double of Liverpool verticals at fence 10a and b (below), at which horses always tend to back off slightly, but it jumped pretty well this year. 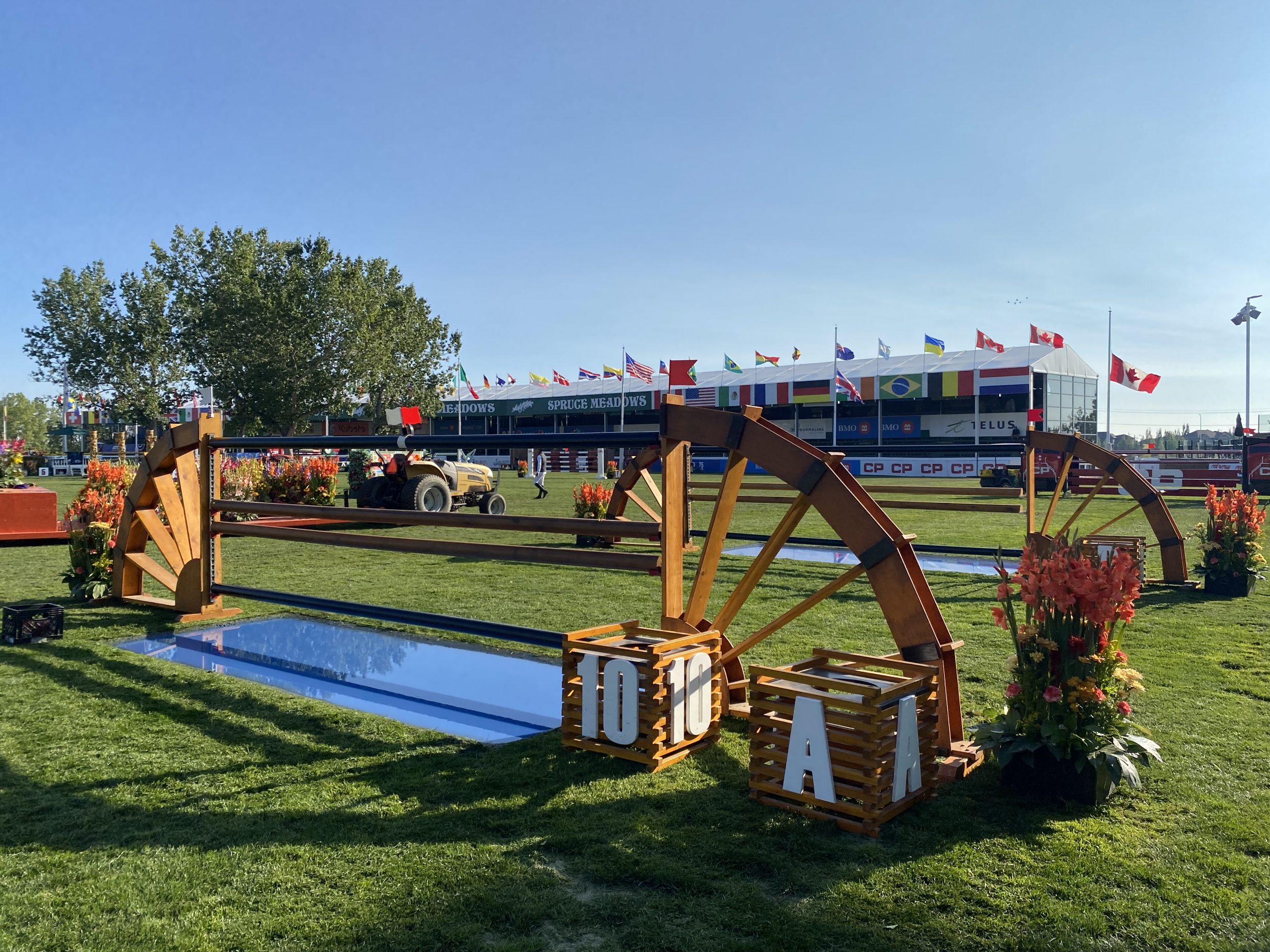 The final Canadian Pacific train oxer featured in many riders’ selfies as they walked the course – it was truly gigantic. H&H’s showjumping editor Jennifer Donald tried and failed to reach between the two top rails (pictured below) which stood 1.95m apart. 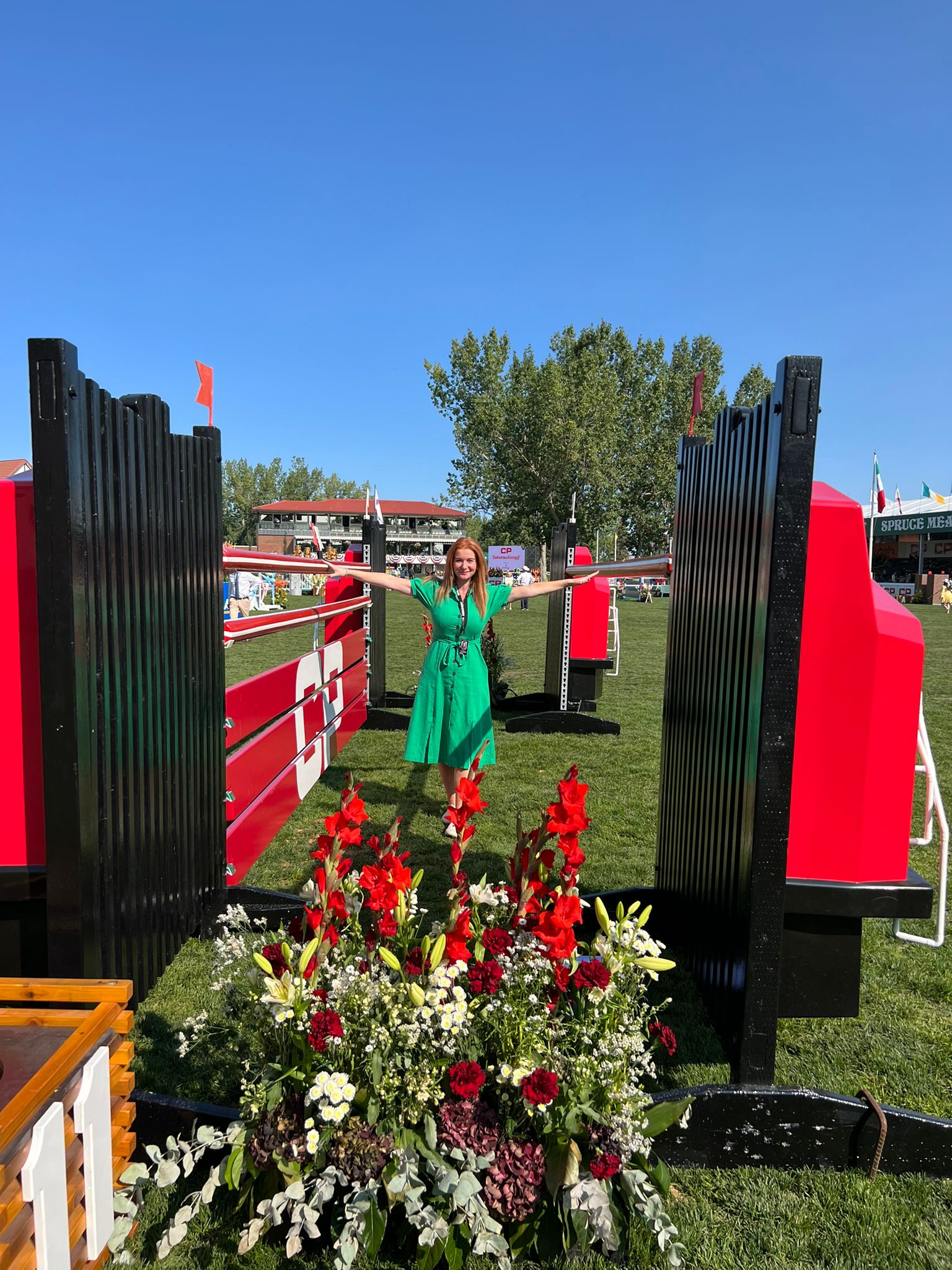 The final fence in the jump-off was so tall it looked as though it was leftover from the six-bar competition – a staggering 1.70m high. 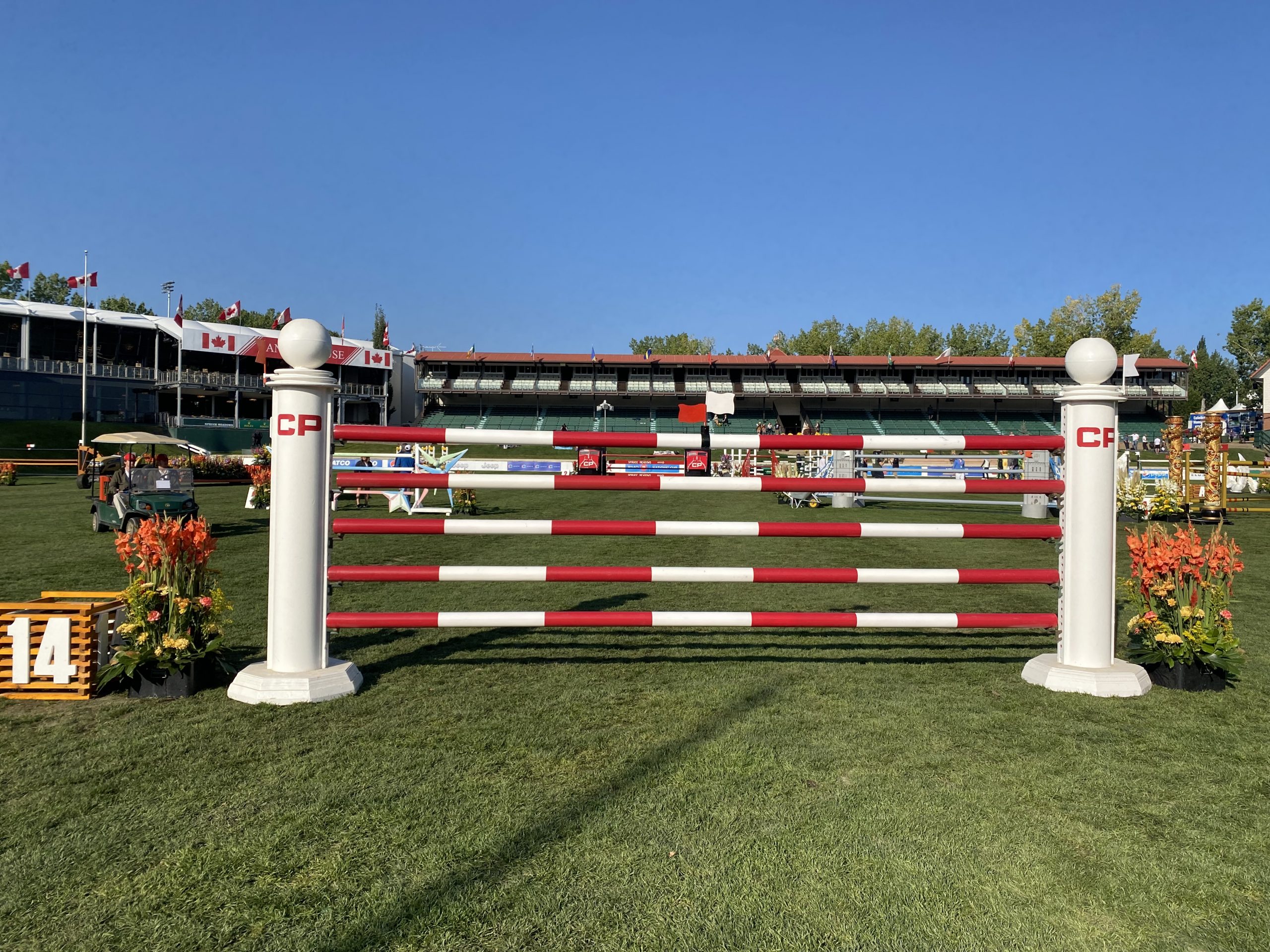 After seeing these fences up close, we certainly have a new found respect for every horse and rider that lines up for the CP International!

Getting started in showjumping course design

Leopoldo gave the following advice for any aspiring course-designers wishing to follow in his footsteps.

“You have to love horses,” he says. “You need to have passion and not be driven by money, as this is not a job for money. You can absolutely survive and I have a good life; but this job is all about loving the horses and having passion for the sport.

“Technically, I would recommend that a young course designer learns about geometry and having the skill to draw, so as to be aware of scale and to ensure you have great plans. Understanding horses and learning about them is also crucial, specifically being able to read their expressions to see when they’re happy or sad. So, a good balance of technical skill and feeling is what someone wanting to be a course designer should have.

“Finally, you need to build the very best courses that you can, and make the riders compete against one another and not against you and your course.”