Home » Dog » “Practice Your Canine Month” on the Farm
Dog

“Practice Your Canine Month” on the Farm


January has been designated “National Train Your Dog Month” by the Association of Professional Dog Trainers (APDT), and hey, why not? (Check out their free videos, by the way, good for them.) Those of us in the north of the northern hemisphere are getting cabin fever anyway, so why not think of a few things could make life better for us or our dogs, and get to it?

I decided to focus on one specific thing. (Always better than some vague, general concept, like “I’ll be a better person,” although heaven knows we could all probably work on that.) Skip and impulse control are not well acquainted–when I got him he spun at the door to go out, and had never learned the concept of stay in his three years of life. He’s sooo much better than he was; for example, he initiates a sit at the door when I put my hand on the knob, etc, but . . .  BUT. When we go to work sheep he tires himself out by running back and forth between me and the gate to the sheep. Back and forth, back and forth. Maggie does it a bit too, but she has incredible endurance, while Skip has that heart thing (leaky mitral valve) and overheats very quickly. Left to his own devices he’d burn himself out before we even got to the sheep. I’ve dealt with it by sometimes ignoring it if it’s cold outside (or I’m just being lazy), or asking him to heel loosely beside me as we walk toward the barn or the pasture.

But here’s the rub: We often walk up a narrow path behind the house that leads to a pasture where we work sheep, and there’s no room to walk side by side. I’ve started asking him to Stand and Stay at the top of the hill when he gets to the gate, but we’ve, as the song says, only just begun.

We’ve actually gone further than I’d thought. I asked Jim to video us this morning as we walked up the hill together, expecting him to run up the hill, back all the way down to me, back up the hill, down to me, etc etc. To my surprise, he was a pretty good boy, until Maggie ran down and then, well, he just couldn’t take it anymore. You can see that as I get closer, he runs to and fro more often:

By the way, I said nothing to Skip or Maggie after they started up the hill; I wanted to see, and for you to see, what they do now without any input from me.

So. Where to go from here? Well, first, off, one dog at a time. I always knew that Maggie also did a little “back and forth,” but I didn’t realize how much until I watched the recording that Jim made. There was Skip being such a good boy until Maggie came running back, at which point they seemed to alternate. “Okay, you run back to her and then come back and then I’ll run back to her; maybe she’ll get her lazy ass up the hill faster if we switch off?” Who know what goes on in those terrifyingly smart brains anyway.

— Set up success: In this case, it means one dog at a time. (Ahem, oh professional dog trainer you, this means training Maggie too in separate sessions.)

— Decide reinforcement: I could use a toy, which both dogs love, but I don’t think they’d pay any attention to if they thought we were going to work sheep. I could use food, but it’d better be exceedingly good because, again, what they want is for me to open the gate and let them into the pastures where the sheep are.

— Set up 2-3 quick sessions a day, making it fun and as easy as I can. You’ll note that this includes me walking up a steep hill, which I do anyway several times a day. But clever human that I am, sometimes, I can incorporate these sessions into our daily walks and save myself some exertion. That’s one of the most important keys to getting a behavior modified or training a new one: Make it easy on yourself by finding ways to incorporate training into your daily routine. It also makes it work better for your dog, rather than them learning during a “training session” that is separate and distinct from normal life.

After putting Maggie back into the house I asked Jim to record a quick training session. I asked Skip to Stand, a cue he knows well from working sheep, praised him when he was good, and asked for a lie down at the top. (Not sure I’m happy with the Lie Down, I’d rather stick with the Stand, but I wanted it to be easier for him, and I knew lying down made him less likely to get up.) I had some treats in my pocket, so I did use them, but opening the gate as soon as I got to the top of the hill was the best reinforcement. Note that I let his last run to me slide. Rome wasn’t built in a day. He’d been such a good boy, tried so hard (look at his tail wagging as I praise him!), that I wasn’t going to sacrifice the good for the perfect.

Note that I started this toward the top of the hill. In the two or three previous sessions (done in mid December) I started at the bottom of the hill, not going very far each time. Where to start is tricky: At the bottom he’s a long way from the reinforcement he wants. At the top he’s a long way away from me as I’m walking up the hill. I’m going to try starting on the bridge, 2/3 of the way up. We can heel together to that point, there’s room for us to walk side by side, which will prevent him from running back and forth. Then I’ll be closer to the gate. As he improves, I’ll start releasing him sooner, eventually from the very bottom of the hill.

Here’s what I love about positive reinforcement: Was this a perfect training session? Nope, of course not. (Where are you Ken Ramirez when I need you? Note: I always need you.) If I watch it again I promise you I’ll find all kinds of things I could have done better. But will he still learn it? Yup. Might take a little longer, but he’s already much much better after just 2-3 sessions. Before I started he’d run All The Way Down and then All The Way Up Again, back and forth, back and forth. It tires me out just to write it out. And by the way, Skip would like you to know that THIS IS REALLY HARD, YOU HAVE NO IDEA HOW HARD THIS IS FOR ME. And I would like to say, “I know it is, you big, handsome, bundle of joy, it’s okay. You’ll get it. And if you’re not perfect, well then, neither is your human. She just wants you to save energy and not overheat when it’s hot.” (Hot? We are not acquainted with that concept here in Wisconsin at the moment.)

So, my dog lover friends: Have you thought about teaching anything new this month? Modifying something that isn’t a crisis but is just a little bit, uh, not good enough? If you’re thinking about something, put it out there in the universe and see what comes back!

MEANWHILE, speaking of Wisconsin and back on the farm: Between Cabin Fever and Covid right now, we’re, uh, okay. We had to cancel a months-in-the-making, possibly once-in-a-lifetime trip (Hawaii), because, well, you know, so we’ve been better. We also know perfectly well how lucky, privileged, and blessed we are to even be thinking about it, so we are disappointed but not complaining.

That has made the new toy we just received all the sweeter. It’s called the Virus Tearrible, and I can not tell you how much joy it has given me to watch our dogs start ripping off the spike proteins from the shell. Take that damn virus!

As I’ve mentioned before, these are not toys for dogs who might ingest smaller toy parts. Skip and Maggie just ignore things they’ve torn off, so it’s safe for them. (Although I admit that I pick up the smaller parts as soon as they’re done, and never throw them for the dogs. Call me neurotic, but there it is.)

And here’s good news! Skip has decided, that yes, indeedy, the couch is a great place to nap.

Here’s a another wonderful thing that is keeping my spirits up: A bulb garden from White Flower Farm. It is ridiculously embarrassing how many times I go to it and count the number of sprouts coming up. 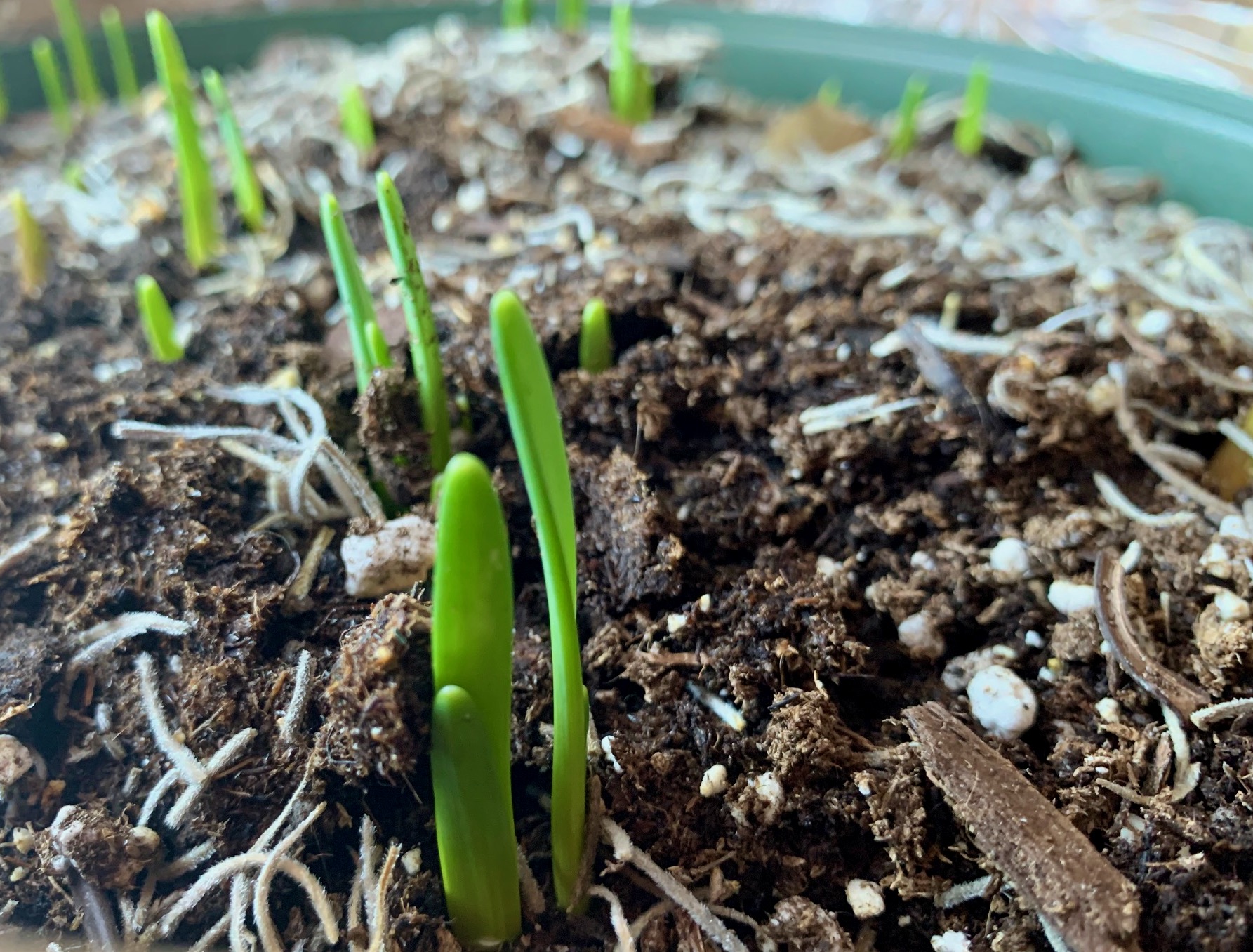 Bulb garden aside, I couldn’t resist buying some flowers at the market today. It’s not the cold that bothers me so much, it’s the lack of color. 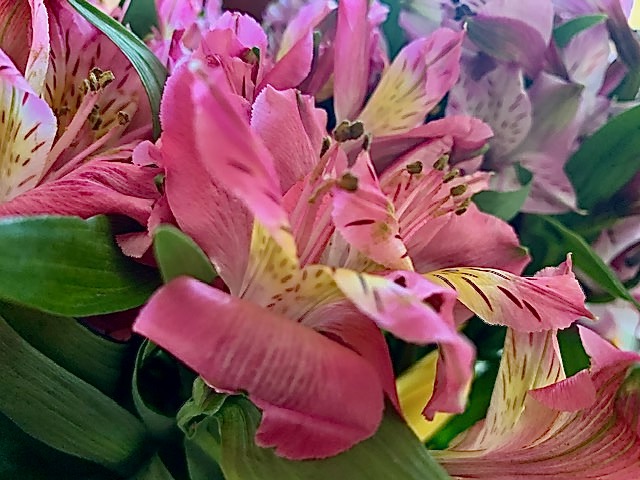 Sometime soon when I get the energy I’ll take a photo of all the clothes it takes to walk the dogs right now. I counted putting 13 things on this morning, including the footwear below. Just in case you were confused, they are not beach sandals. (Yak Tracks and LaCrosse boots, I literally couldn’t manage without them.) 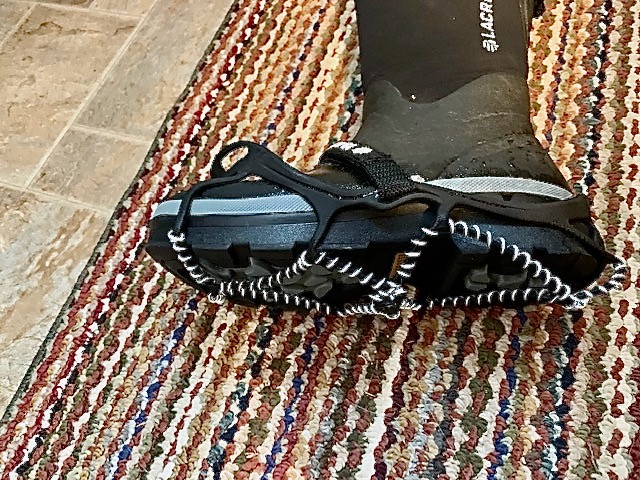 I hope you are weathering the days okay, which is saying a lot, given the drama of our current daily weather. Let us know if you’re going to play with me and APDT and choose something to train this month, we’d love to hear about it.

Half 3 – The Clicker Middle Weblog