Not a sighting, but a general observation regarding coots.

The following two graphs provide numbers of Coots counted
on Allen Pit (in Dorchester), and Thrupp/Bullfield Lakes (Radley Lakes). As can
be seen in the graphs, there has been a significant and sudden unseasonal
decline in Coots on these lakes over the last week. 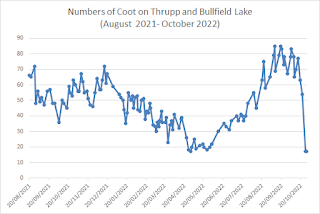 In contrast, numbers of Coot on Farmoor Reservoir have
increased. The graph below provides the number of Coot on Farmoor Reservoir
recorded in 2022 during twice monthly counts (blue bars), and the average number recorded
between 2018 and 2021 for comparison (red line). The graph highlights that far from Coots
starting to decline on the Reservoir (as they typically do at this time of
year), the number of Coots recorded at Farmoor today (1140 individuals) is
broadly double that typically recorded at the end of October. Further, the
count of 1140 individuals is the highest number I have recorded at Farmoor
since commencing regular monitoring in 2013. Finally, to note, the majority of
the individuals were on F2 (with 1.1% of Coots on F1). 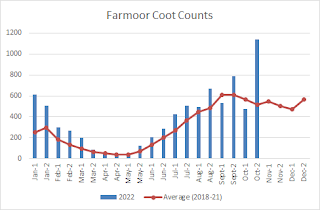 Based on the above, have Coots from Allen Pit and
Thrupp/Bullfield Lakes moved to Farmoor? If so, why? Has the reduced water
level at Farmoor increased its suitability for Coots? Further, how do Coots
know to leave the lakes to move to the Reservoir? It is interesting to note
that the majority of birds were on F2, with few on F1 when the water level was
of a similar level (though I note today, the water level had risen on F1). Are
the depths of F1 and F2 different to explain this pattern of occurrence, or
could disturbance be implicated (i.e. paddleboards who typically paddle around
the periphery of F1 and could flush Coots to F2). Finally, the combined numbers of
Coot that have been ‘lost’ from Allen Pit and Thrupp/Bullfield Lakes (c150
individuals) do not equate to the increase in number on the reservoir,
therefore are there any waterbody/waterbodies in Oxfordshire that have lost
c370 Coots? 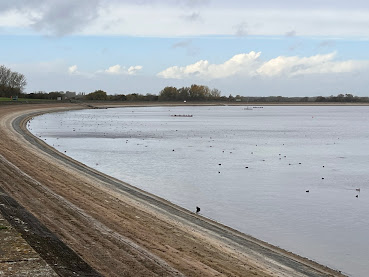 ‘After I bought on, I used to be howling’: rider given 48 hours to stay in 2018 returns to the saddle