Reigning Olympic dressage champion Jessica von Bredow-Werndl exploded back onto the competition scene with her Tokyo and European gold medal-winning partner TSF Dalera BB. Jessica opened her comeback with a freestyle win on Ferdinand BB in Austria last month, before heading to the World Cup qualifier in Lyon with Dalera (26 to 30 October). This was the mare’s first international start since winning the World Cup Final in April and the pair dazzled with a huge +90% score for their new freestyle.

Discover more about Jessica and Dalera’s performances in Lyon

A Clydesdale mare whose canker was cured through a combination of top farrier and 3D printing technology is sound, happy and back in work. Northwest Equine Vets, farrier Richard Helliwell, 3D printing expert Andrew Allshorn and Freda’s owner, Anne Wilson, worked together to find a novel way of treating the mare’s foot condition. Andrew told H&H it is the “most rewarding thing” he has “ever done”. “Making race cars go faster, or doing something that hasn’t been done yet with cars or planes, is interesting but using the technology to make someone’s life better, human or animal, is what it’s all about,” he says.

Read about how teamwork, skill and technology resulted in a happy ending 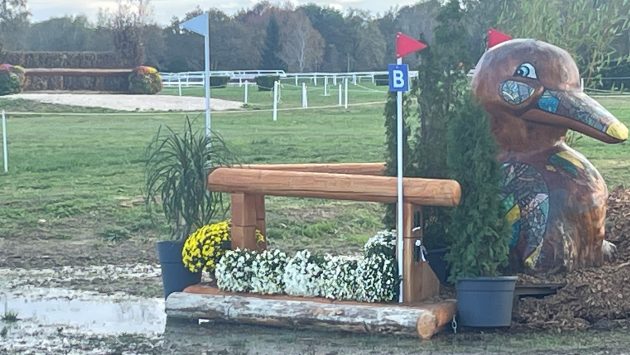 Frangible devices proved a major talking point at Pau Horse Trials, with nine competitors picking up 11 penalties for activating the MIM clip at the corner at 21b on the CCI5* cross-country course on Saturday (29 October). These included dressage leader Felix Vogg and his Luhmühlen winner Colero. Some riders considered they had not hit the fence hard enough for it to warrant collapsing, though there were some cases where the device saved falls, and some called for the reintroduction of an appeal system. “I’m totally with it that the sport has to get safer for riders and horses, and it’s good that there is progress in it. But there is not enough research at the moment – we just take a system and penalise the riders if they activate it – it doesn’t matter how many horses touched it before,” says Felix, who finished 17th. “At every event we have frustrated riders, owners and so on because of MIM clips which shouldn’t have been activated.”

The Boy, the Mole, the Fox and the Horse will air on BBC One, BBC iPlayer and Apple TV+ this Christmas.