Lottie Fry has been riding the crest of a wave in the dressage world for the past few years, but never before has she been as flush when it comes to top horses as she is in 2022.

The 26-year-old has no fewer than five rides competing at international grand prix level this year, thanks to her position as head rider at Van Olst Horses in the Netherlands – and three of those stand an excellent chance of being selected for the British team for this summer’s dressage World Championships in Herning, Denmark. It’s a hugely enviable position to be in, and Lottie describes it as “surreal”.

“I’m aiming for the worlds this year, but it could be on any one of my top horses,” she explains. “I really don’t know who is the best, as they are all so amazing. They all keep improving, and pushing more and more for me, and surprising me.”

So, who are Lottie’s main contenders for world championship team selection this year, and who are the young pretenders we should be getting excited about for the years to come?

Everdale needs little introduction. The 13-year-old Lord Leatherdale x Negro son was Lottie’s medal-winning ride at both the Tokyo Olympics and European Championships in 2021, and kept on improving as the busy year progressed, scoring a hat-trick of personal bests to win team silver and finish fifth individually at the Europeans. He has only competed once since last summer, at the Hagen CDI4* in April this year, where he finished sixth in very hot company, with Lottie saying “he gave me one of the best rides ever” there. Everdale knows the job and you can be sure Lottie will have him at his absolute peak come the summer. 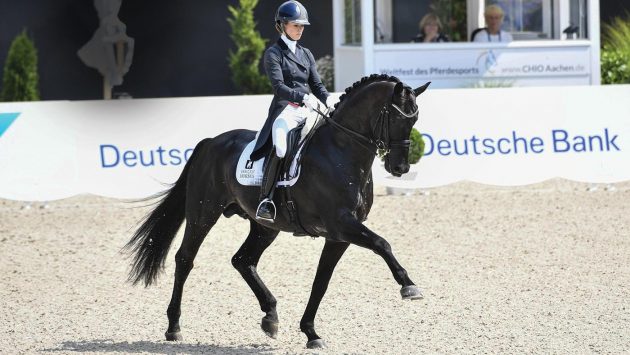 Quite possibly the hottest name in dressage right now. This 11-year-old stallion, also b Lord Leatherdale x Negro, though out of a different mare to Everdale, has turned heads throughout his career, when winning the seven-year-old world championship in 2018, and as his grand prix career has gathered strength in the years since. His recent 78.68% and 80.98% grand prix specials at Lier CDI4* and Opglabbeek CDI3* got tongues wagging across Europe, and he looks a seriously hot prospect for team selection this year. Lottie and Glamourdale will compete on the British Nations Cup team at the Compiegne CDIO5* this weekend, and all eyes will most certainly be upon them. 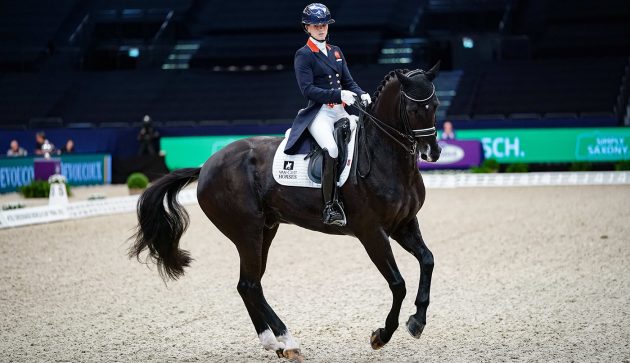 Never to be underestimated, this 14-year-old by Zucchero x Tango – the only gelding among Lottie’s top tier horses – has already proven himself to be a successful team horse at the 2019 European Championships. He and Lottie enjoyed a successful winter on the World Cup circuit, and while the World Cup Final itself last month did not quite go to plan, Lottie reports that Darky is improving all the time, and still has plenty more to offer. He has shown himself to be a reliable mid-70% grand prix performer, which is very valuable in a team horse.

Another black stallion among her collection, this 10-year-old Diego x Lord Leatherdale son has only done one international grand prix to date but has scored over 73% nationally at the level, and Lottie rates him very highly.

“He is gaining experience and I’m so excited for the future with him,” she says.

A nine-year-old stallion by none other than Everdale, and out of an Uptown mare, Inclusive only started at grand prix level this year but is already producing solid results including two plus-71% scores at Hagen in April. Look out for him in 2023 and beyond when he’s gained strength and maturity to fully show off his immense talent.

This striking dappled grey Everdale x Vivaldi eight-year-old gelding is competing at international small tour, but, just like his father, it’s in the grand prix where his talents really lie. Lottie reports that he is already doing piaffe-passage, even when it’s not required!

“Especial is so talented and the judges were in love with him,” she said after Lier CDI3*. “He’s going to be very exciting.”

Last year’s six-year-old world champion, Kjento  is now working at prix st georges level, and Lottie has her sights set on this year’s World Breeding Championships with him, for a tilt at a repeat title in the seven-year-olds.

“He finds everything so easy: collection, extension, whatever he does he does it so well. He is just incredible,” Lottie says of the stunning Negro x Jazz stallion.

Don’t miss the full H&H interview with Lottie Fry, out in the 19 May issue of Horse & Hound.

Kjento being ridden at home by Lottie Fry
Credit: EQUIGENIEK

The Prancing Horse Property in California