Feeding Sensible-Ebook Evaluate – The Different Finish of the Leash


Nutrionist Linda Case’s new book, Feeding Smart with the Science Dog, is great. Truly great. I wrote several other introductory sentences, deleted them all, and finally settled on the simplest and most accurate one. If you’re anything like me, and I know many of you are, and you want to feed your dog as well as you can, it’s a fantastic resource.

What I love especially about this book is that the author dives deep into the recent research on canine nutrition, and summarizes what she found for us mortals who are not trained in the field. She clearly distinguishes between–hear me clapping–facts versus opinions, unlike many other resources out there. She and I spoke a while ago about what she found, and what she took away from her research for the book.

I asked Linda what the main points she wanted people to get out of reading the book, and she was quick to answer. “We all need to take a hard look at what processing does to food,” she said. Processing inherently causes the loss of nutrients, and so manufacturers try to “fix” that by adding them back in. But the way the food is eventually put back together results in nutrients that might look good on paper (X percentage protein, for example) but that have been changed so that much of the value is not longer accessible to the dog. 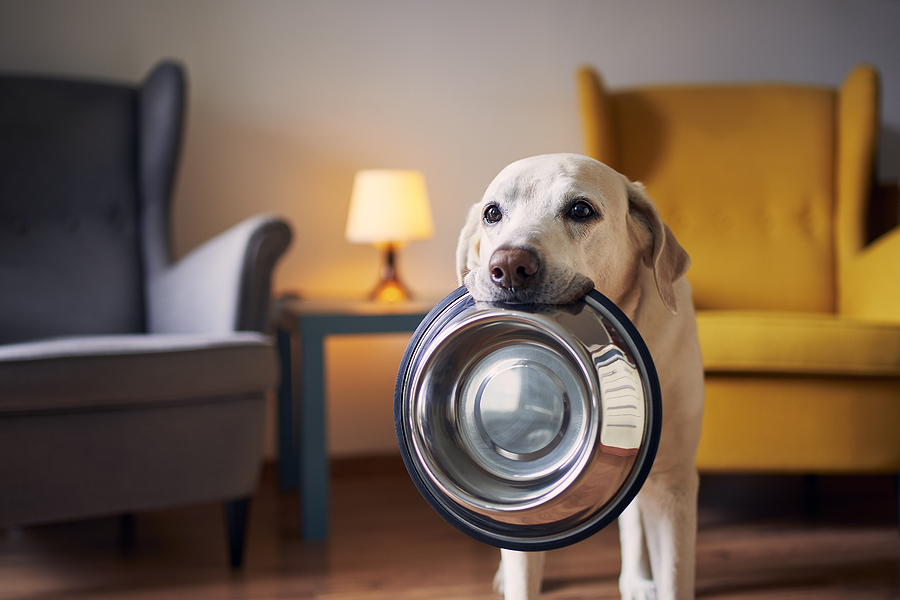 “Processing,” by the way, is not just “cooking.” Cooking a piece of chicken at home, for example, is a far cry from the high temperatures often used to sterilize food, as well as the additives that increase shelf life, and “ensure product safety.” It’s a reminder to us to think outside of the “raw food” versus “not raw” box. The “not raw” category includes a lot, including lightly cooked food that has not been processed in the same way that commercial kibble often is. Linda and I were both, by the way, surprised by the 2019 study that compared the digestibility and available essential amino acids in four different types of chicken: Raw, steamed (cooked at 200 degrees for 10 minutes), retorted (as found in canned foods, cooked at 250 for 30 minutes), and dried/rendered chicken meal.

No surprise that chicken meal was deficient both in digestibility and available amino acids, but the lightly-cooked chicken was actually higher in both categories than the raw. The point isn’t that “lightly cooked” is better than “raw,” (they both did a good job providing nutrition), but rather speaks to one of her important points: Pet food companies should be providing us information about digestibility, not just “percentage of protein.” If protein isn’t very digestible and doesn’t contain accessible essential amino acids, then it’s not doing it’s job, no matter what the percentage.

Speaking of chicken, I asked Linda about something I’d heard–that dogs prefer chicken over other kinds of meat. That made sense to me because anecdotally, it has seemed that small pieces of cooked chicken can go a long way to teaching a dog to do just about anything. But is there research on canine preferences? She answered that what seems to be most important to dogs is that it’s meat, period, not so much what kind. Her book mentions a few studies that suggest dogs simply choose the food that smells the most like meat (even if it’s low protein bread soaked in a little chicken broth.) 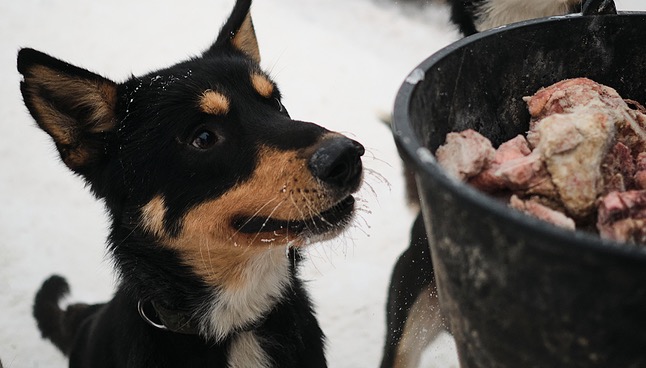 I did find some other research on canine meat preferences: Houpt and Smith, 1981, found that “Dogs prefer beef, pork and lamb to chicken, liver and horsemeat and strongly prefer meat to cereal diets.” (This might explain why Maggie and Skip are fixated under the stove where I’m cooking up a pasture-raised beef heart for them.) It does, however, bring up the question of “what kind of chicken compared to what kind of beef? Ah, I think I’m going to have to enroll Maggie and Skip in a very non-scientific study!

It seems as though every answer in nutrition leads to another question, and I asked the author one that’s bugged me for many years. Why is most commercial and “boutique” dog food (sorry, hate that term, but can’t think of another) chicken-based rather than beef? Beef, for all its costs and benefits, is ubiquitous in this country, so why not more in dog food? Linda didn’t know either; we speculated that chicken meat is simply cheaper and easier to get, given all the chickens raised for egg production.

I could go on and on about the things I learned in this book, but far better you read the book yourself. Here’s one factoid I can’t resist, related to her section “Why do dogs eat poop?” One study on coprophagia in dogs found that “the majority of poop eaters directed their attention to feces that were fresh–no more than two days old.” (Also, that what you feed your dog has nothing to do with their preference for dog poop.) That seemed to me to be the perfect vehicle then for passing worms from one dog to the next, but–hold on to your pooper scoopers–it’s actually the opposite. It seems that worm eggs, at least hookworms and roundworms if not others, are not infective soon after being voided. Thus, eating feces soon after it’s deposited could actually decrease worm loads in a canine population. Who knew?

Please note: I will not be quoting this study to Maggie, an equal opportunity poop eater, who is happy to eat Skip’s poop in any version she can find it. Skip, on the other hand, pays no attention to Maggie’s poop, but is obsessed with scat from sheep. Ah dogs, gotta love ’em.

There’s so much more in this book, from what nutrients dogs truly need, to what food labels really mean (“Ingredients: Chicken, chicken meal, beef, …” could mean there is less than 1% beef in the food, for example), to an objective, science-based discussion of feeding raw.

Speaking of “feeding raw,” there’s something about what we feed our dogs that hits a raw nerve in many. What I love about Feeding Smart is that it’s a balanced, objective discussion about how we feed our dogs, full of lots of useful information. That’s a big plus when talking about an issue that people have strong feelings about.

After reading Feeding Smart, you still might have a lot of questions about what to feed one specific dog. Linda Case doesn’t do private consults about what to feed your dog, but she had some recommendations of people who do, including Petdiets.com, established by Dr. Rebecca L Remillard, Evolve Animal Services (not consulting now but perhaps good info on the website?), and software from the Pet Diet Designer. 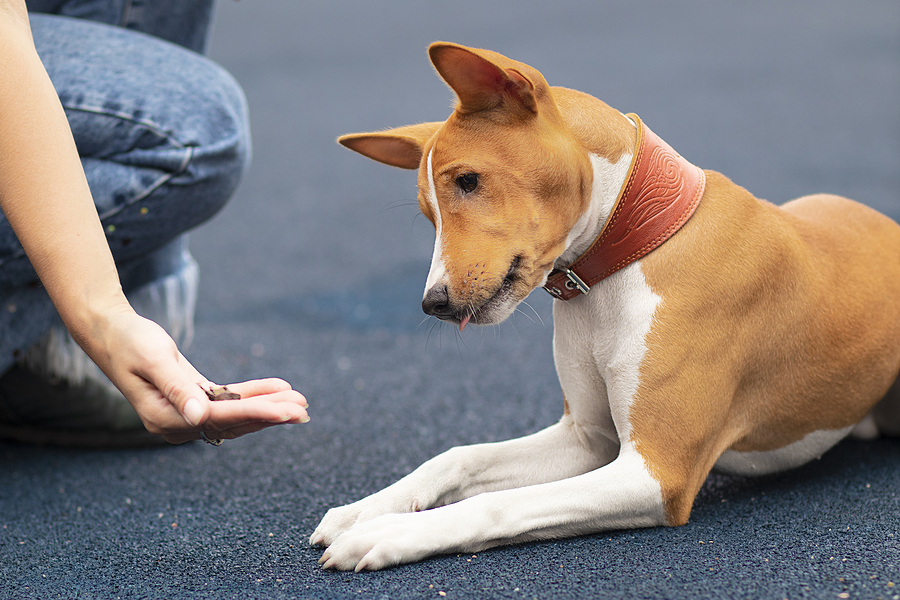 We’d all love to hear if you’ve read Feeding Smart, (or Linda’s earlier book, Dog Food Logic), and anything you’d like to add to the discussion (which, of course, this being all about positive reinforcement, will be respectful and informative. Or funny. Funny is good.)

MEANWHILE, back on the farm. In the icy cold. Just saying. Definitely not in Hawaii. Yesterday we had high temps (low 50s!) and a lot of melting, but that was from lots of snow and ice still around. Predictably, now we have lots of ice because, well, . . . night happened, and of course, everything froze up again. We’re predicted to get an ice storm tonight and tomorrow. Ah my, what can we do? Nothing but keep everyone safe but still exercised, as well as possible.

Maggie would like you to know that she does not want the smelly thing on her foot anymore. Tall Two-leg Female says it keeps her broken toe nail from being re-injured while it heals, but it’s not her foot after all, and Maggie doesn’t really care all that much if she has to limp and the salty wet stuff that comes out is fine to lick up, at least on the floor. It’s harder to lick up off the couch, but she would like you to know she’d do her best. Tall two-leg says it’s as “bright red” as the vet wrap, but Maggie doesn’t know what red is, so what’s the problem? 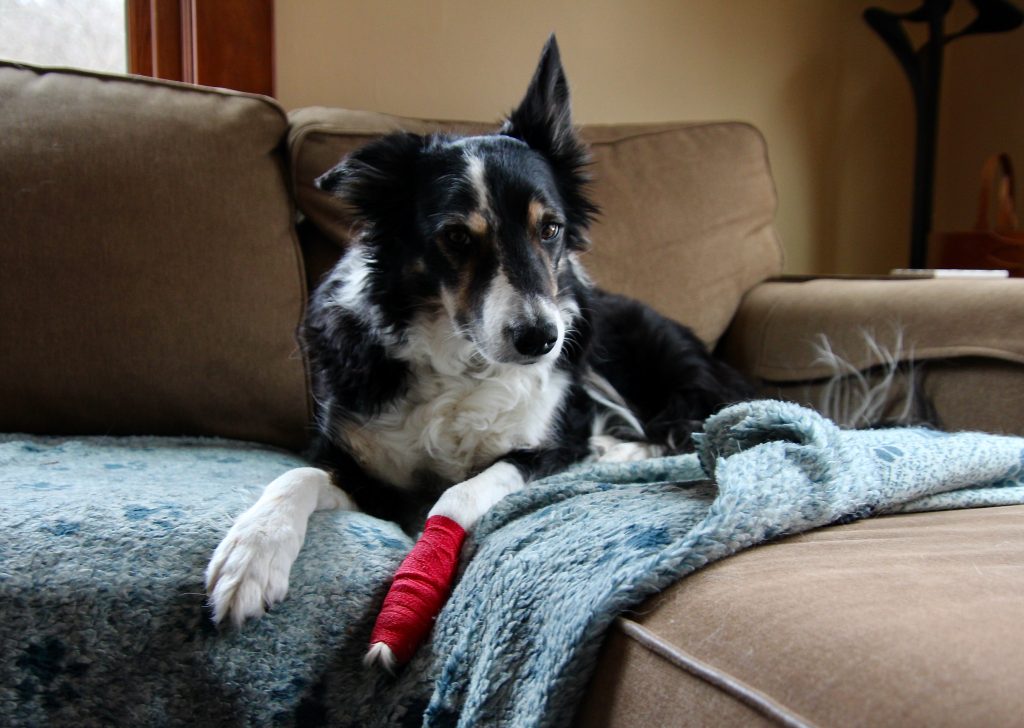 Tall Two-Leg Female also says it’s grey and dreary outside, so thank heavens for this Amaryllis that she finally dug out of the cellar is blooming a month ago. 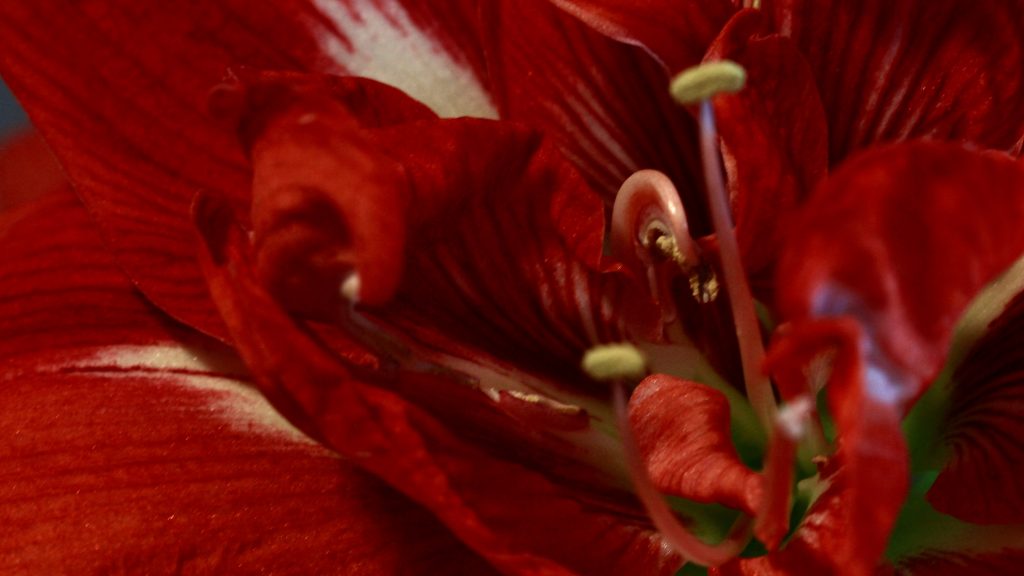 The bulbs in the “bulb gardens” are about done flowering but the two-legs in the house are appreciating every stage of their blooming, including their gradual and artistic demise. 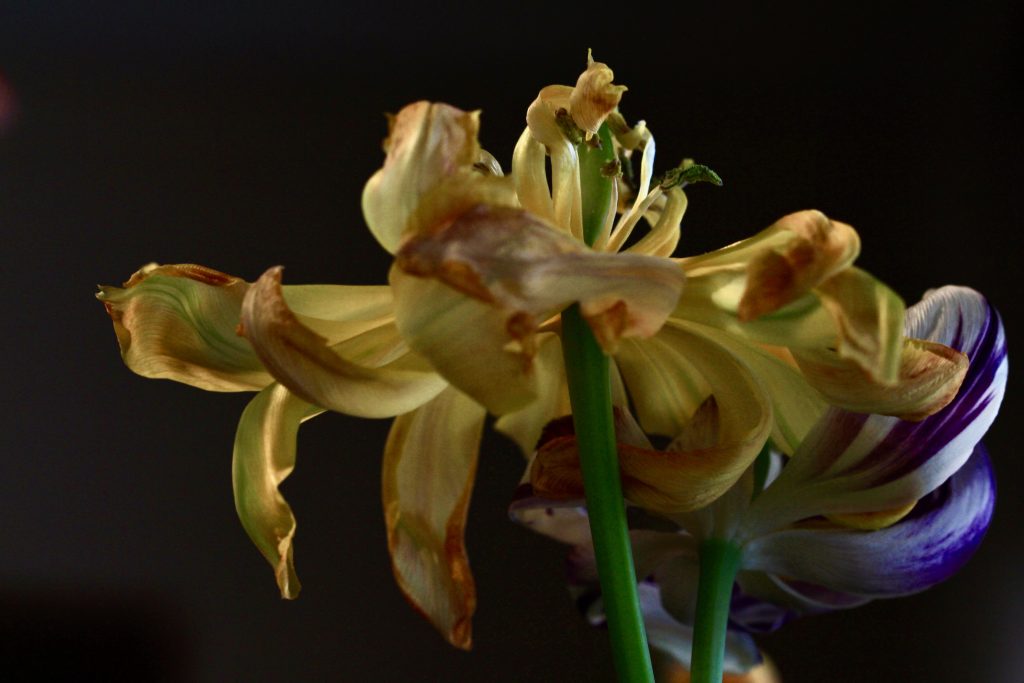 I couldn’t resist adding in this fuzzy shot of a Bald Eagle whose been working on a turkey that must have been hit by a car. A good reminder that Baldies are just as happy to scavenge as to hunt–the first one I saw when I moved to Alaska was at the town dump with a Campbell’s tomato soup can in its claw. I thought it a good ending to post about diet and nutrition! 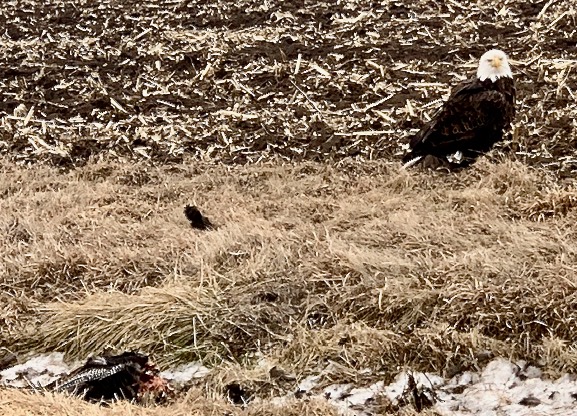 Here’s hoping you have a diet this week of good food, good luck, and good friends. Jump into this conversation, we’ll love hearing what you have to say.

Information Entry Contest: How do you FeederWatch?