Marine
Festival Volunteers Daisy Laing and Tara McEvoy-Wilding bring us a marine
sighting special to coincide with the start of the Lundy Marine Festival.

It was really hot this week with a red-warning
heatwave. Temperatures reached 27.8° on the 17th. There was very little wind
making it seem even hotter.

This
week saw the start of Lundy’s much anticipated marine festival, celebrating the
50th anniversary of its Marine Protected area. The long weekend kicked off on
Thursday with the arrival of some of our fantastic supporters: The Porcupine
Marine Natural History Society, The Marine Biological Association, The Blue
Marine Foundation, MARINElife, Sea Watch Foundation and The Natural History
Museum. 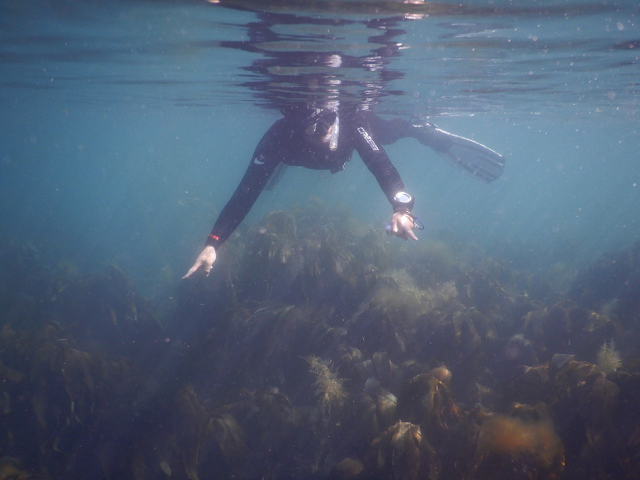 Activities began immediately with the arrival of the
marine experts who jumped straight into a BioBlitz of Lundy’s extensive rocky
shore, focusing on a location known as Devils Kitchen. Members of the Marine
Biological Association and the Natural History Museum collected samples for the
Darwin Tree of Life Project, aiming to sequence the genome of the specimens
obtained. The Porcupine Society compiled a list of organisms, many of which
required microscopic study in the St Helens pop up marine biology lab. Alongside
this visitors were able to join in with cetacean watches directed by the Sea
Watch Foundation, occurring on the southwest coast of Lundy. Harbour Porpoises
were seen frequently.

The BioBlitz continued into Friday, which saw two snorkel
safaris led by the Islands warden Rosie Ellis. The snorkelers spotted some
fantastic species including Spiny Starfish, Star Ascidians, Dead–man’s Fingers
and Plumose Anemones, not to mention the large school of sand eels, or as Rosie
calls them “puffin food”. On Friday evening our Marine expert talk was hosted
by Dr Keith Hiscock about why Lundy’s marine life is so special, as well as the
development of conservation and changes to marine life over the past 50 years.

Data collection on the rocky shore continued into Saturday
with the discovery of the non-native marine algae species Green Sea Fingers (Codium fragilis), commonly mistaken with
native Velvet Horn Seaweed (Codium
tomentosum). Further microscopic examination revealed the specimen to be C. fragilis,
identified by a small triangular point at the end of each frond. The St Helens
centre pop up lab also had virtual reality headsets used to experience diving
with Lundy’s curious seals, as well as interesting exhibitions which were
praised by the public.

The marine experts continued identifying specimens throughout Sunday.
During the afternoon, a rockpool ramble was held by wardens at Devils kitchen,
for the public to explore Lundy’s marine life up close. Some interesting
species were spotted Including a Worm Pipefish, Velvet Swimmer Crabs and a
whopping 56 Celtic Sea Slugs.

On to the
birds and Swifts are continuing to be seen every day. A high count of 12 were
seen on the 11th. A few more Curlew were seen with singles flying over on the
13th and 14th. A Cormorant flew past the Terrace on the 13th and Grey Heron
flew past Jenny’s Cove being mobbed by all the gulls on the 16th.

The cliffs
are getting quiet with most seabirds now headed out to sea. A max count of 485
Puffins were on the sea at Jenny’s Cove. The Kittiwake chicks at our study plot
are growing well with most near to fledging.

The
Swallows have fledged from the church porch and a new pair have made a new nest
above the entrance. Meanwhile individuals from further north have started to
pass through with a high count of 16 on the 17th.

The male
Song Thrush that has been singing in Millcombe since April has finally stopped
after unsuccessfully finding a mate. A Grey Wagtail flew over Millcombe on the
11th and a Tree Pipit flew over on the 13th.

The first
Clouded Yellow of the year was seen on the cliffs below Old Light on the 11th.
Two Hummingbird Hawk-moths and a Painted Lady were seen on the 13th.

The moth
trap has been busy in Millcombe with species including Devonshire Wainscot,
Antler and Common Wave, which is new for the island.

How Correct is a Canine DNA Check? – Dogster

House Cures For Coughing In Canines