The Longines FEI Jumping World Cup qualifiers are coming thick and fast, with Irish showjumper Conor Swail and Frenchman Julien Epaillard claiming victories on either side of the Atlantic this week. The latter’s win in Lyon marked an astounding seventh consecutive five-star success for the world number three. Meanwhile Great Britain finished on the podium in the CSIO3* Nations Cup in Spain, where Tim Gredley returned to team duties for the first time in many years and Robert Murphy made a sterling debut.

Here is H&H’s weekly round-up of just some of the international action from the world of showjumping over the past week, plus showjumping results.

Coyle brothers share puissance spoils: ‘When the helmet goes on, you become competitors’

Irish brothers Daniel and Jordan Coyle, and US rider McLain Ward, all cleared 2.10m (6ft 10in) to share the $25,000 Defender puissance spoils at the Washington International Horse Show. This was the 10th time McLain has won or tied in the puissance at the show and he returned with his 15hh speed specialist Catoki, who tied for victory last year as well.

“I knew he was always brave, but he’s barely bigger than a pony,” he said. “He did the speed class [at this show] and was brilliant, almost won that. It’s incredible. I have barely any spur and the horse pulls you down there like a lion and I think he enjoys it. He’s an incredible winner.”

Daniel Coyle, who won the opening class at this year’s show with the great mare Legacy, was also a co-winner of last year’s puissance and entered the 14-year-old Oak Grove’s Carlyle, owned by Ariel Grange, “to give him a bit of heart” after a slow start to the week.

“He jumped great every round,” said Daniel. “That’s him; he’s one or the other, he’s either frantic or he just goes and does it very simply.”

Daniel’s older brother Jordan completed the trio of Washington’s puissance winners with Eristov (main image), a 13-year-old KWPN gelding with whom he finished fifth in the Hickstead Derby.

“He was my first big-time horse,” he said. “I’m thankful for everything he’s done for me. We gave him a break, planning to wind down and retire him, but he didn’t love that so much.

“By the end of tonight [puissance] it felt like I could have jumped anything.”

Daniel said of competing against his brother: “We’ve competed our whole lives together. We’re brothers, but when the helmet goes on, you become a competitor and that’s how it is. It’s great, we’ve learned a lot from each other over the years and it’s great now to be at the top of the sport together.”

French star Julien Epaillard (pictured above) continued his superb run of form when landing a staggering four five-star classes in Lyon, France, including the Longines FEI World Cup qualifier and the Longines Grand Prix with the 10-year-old mare Caracole De La Roque. His remaining wins came with Donatello D’Auge, in the Equita Masters on Saturday and the opening two-phase

“You can never expect a weekend as good as this one,” said the 45-year-old, who had landed a hat-trick at St Lo the previous week, meaning that he has won all seven of the last five-star classes he’s entered. This also marked his 69th international win this year.

“I am lucky enough to ride outstanding horses, but there is always an element of luck involved too. You have to enjoy it while it’s there.”

‘We’ve gone through the roof’

Conor Swail landed his second World Cup qualifier in a row, this time riding Count Me In, and now holds a commanding lead at the top of the North American League.

His victory at the Washington International Horse Show presented by Mars Equestrian in Upper Marlboro, USA, came after a nine-way jump-off on the 15-year-old Count Grannus gelding, owned by Mannon Farm and Sandy Lupton, and known at home as Crosby, on whom he finished eighth in last season’s World Cup Final. It followed Conor’s success in the opening leg in Sacramento with Vital Chance De La Roque.

“This is his first five-star grand prix win with me and I’m just so thrilled for him,” said the Irishman, who triumphed with a slick clear in 35.76sec, just ahead of runner-up Daniel Bluman riding Gemma W. Barely a second separated the top four riders and third went to US rider Brian Moggre on his long-time partner MTM Vivre Le Reve.

“Count Me In has really changed my career,” said Conor, who just needs to win one more leg of the World Cup to match his record hat-trick from last season as we head towards the 2023 final in Omaha. “He’s brought me to a lot of places I’d never been and has been successful doing it. This year, I know he’s capable and [returning to the World Cup Finals] is something that I’m looking forward to doing with him.

“Since I got these two horses, Count Me In and Vital Chance De La Roque, we really hit it off and we’ve gone through the roof.”

“They all worked very well together and the experience they gained here will stand them in good stead going forward,” said chef d’equipe Di Lampard. “It was a great result from 15 teams. Robert was on his first senior Nations Cup and jumped solid rounds, Joe, on his second Nations Cup after being on the winning team in Gorla Minore, Italy, put in good rounds. We needed clear rounds and Tim, on his first Nations Cup for many years, and Skye, who also jumped for clear and four in Prague, both handled the pressure extremely well and delivered.”

Niamh has racked up numerous victories and placings on the tour and sealed it with a superb grand prix performance on Sunday, beating countryman Cian O’Connor and Kilkenny.

“My mare has jumped phenomenally,” she said. “She was very strong in the first round, there were some very difficult lines, especially at the beginning of the test, but she put her heart into it as always and she succeeded.” 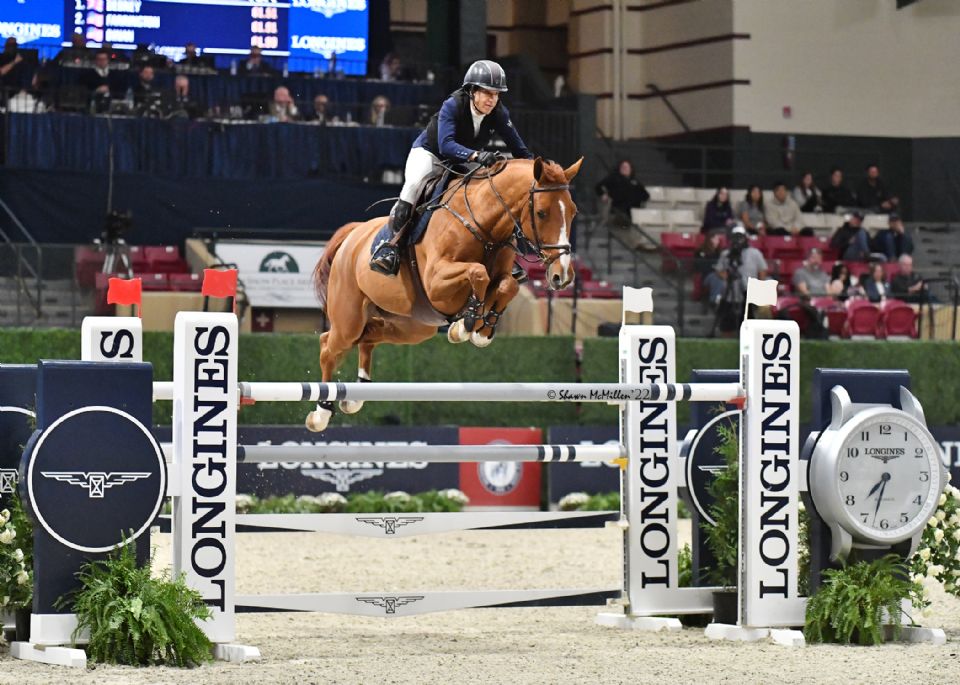 ‘The cupcakes are why I wanted to win here!’

“He’s a new horse for me this year,” said Laura of the 10-year-old Selle Francais gelding by Old Chap Tame x Kashmir Van’t Schuttershof. “He’s been a fantastic horse for me so far, but this is the first class I’ve won with him, so I’m excited. The funny thing about this horse is that I’ve had a bit of steering issues along the way. Tonight you definitely needed all of your power steering. I thought, ‘I have nothing to lose and I’m going to have to give it a go. He’s super brave and he was just right on it for me.”

But the best prize of all for Laura?

“I’m dying for these Georgetown cupcakes; it’s why I wanted to win here!” joke Laura, who won the show’s leading lady rider award and tied for the international jumper championship.