celebrating particular moments in her life


Queen Elizabeth II may have be the most famous, admired and garlanded person on the planet, but nothing brought out her widest smile quite like the simple pleasure she took in spending time with horses. Whether breeding elite thoroughbreds for the racetrack, visiting the ceremonial horses in the Royal Mews, or enjoying the range of breeds in which she was so invested, horses of all shapes and sizes was her passion.

During this time of quiet reflection, here is a selection of just some of the moments throughout The Queen’s special life with horses, in 25 pictures:

Birthday girl: Princess Elizabeth photographed with a pony in Windsor Great Park to mark her 13th birthday, on 21 April 1939 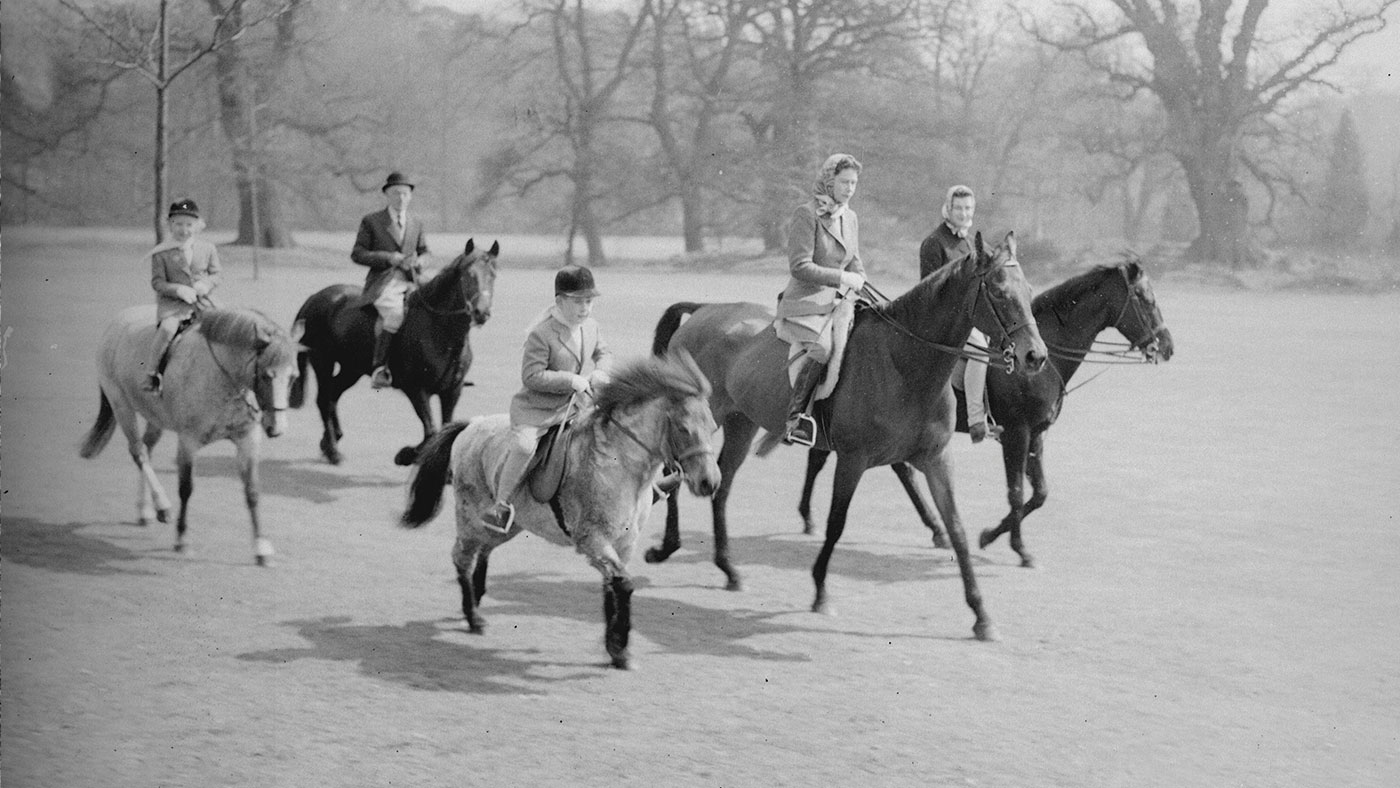 A family hack: The Queen (second from right) rides out with two of her children, Princess Anne (far left) and Prince Charles (foreground), in 1956 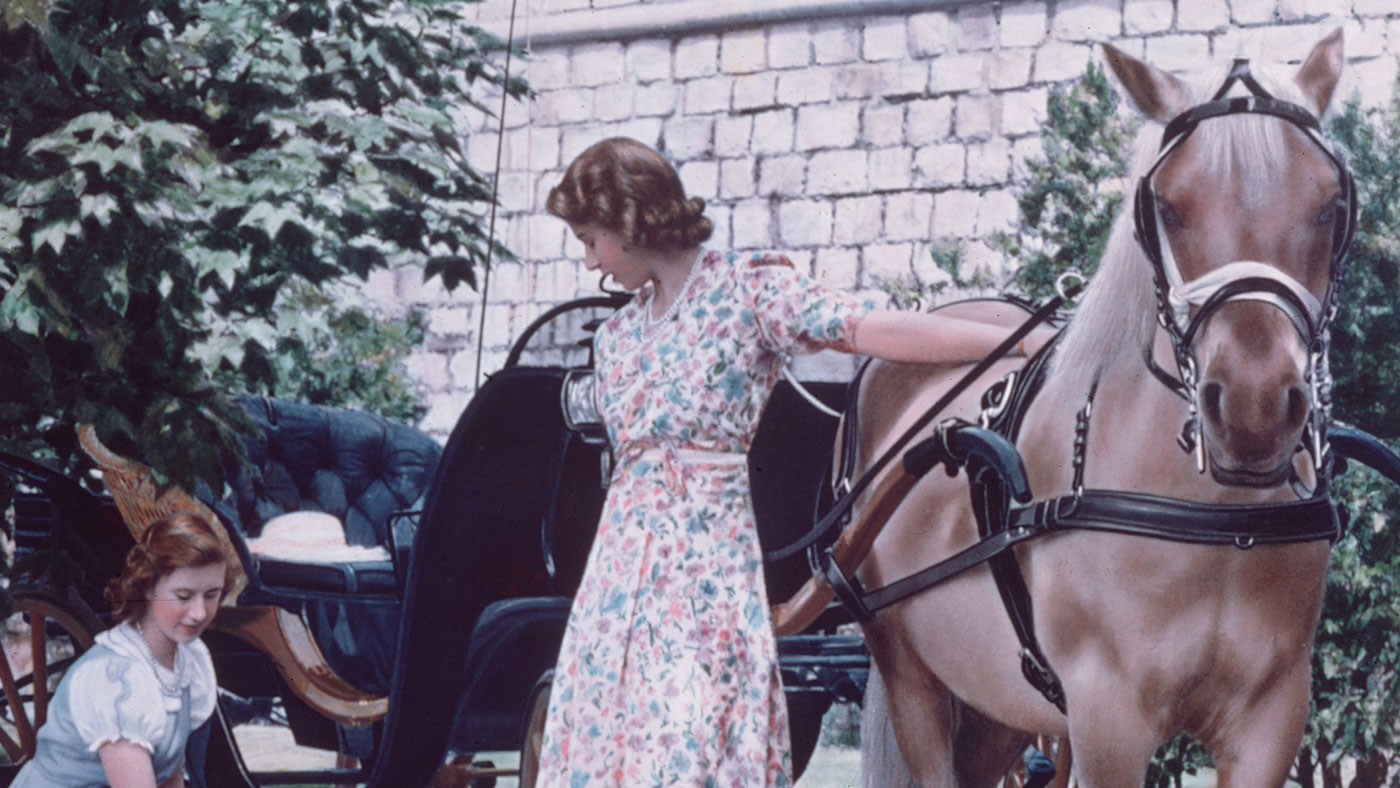 The two sisters: Princess Margaret and Princess Elizabeth with a pony and cart at Windsor in 1944, when the future Queen was 18 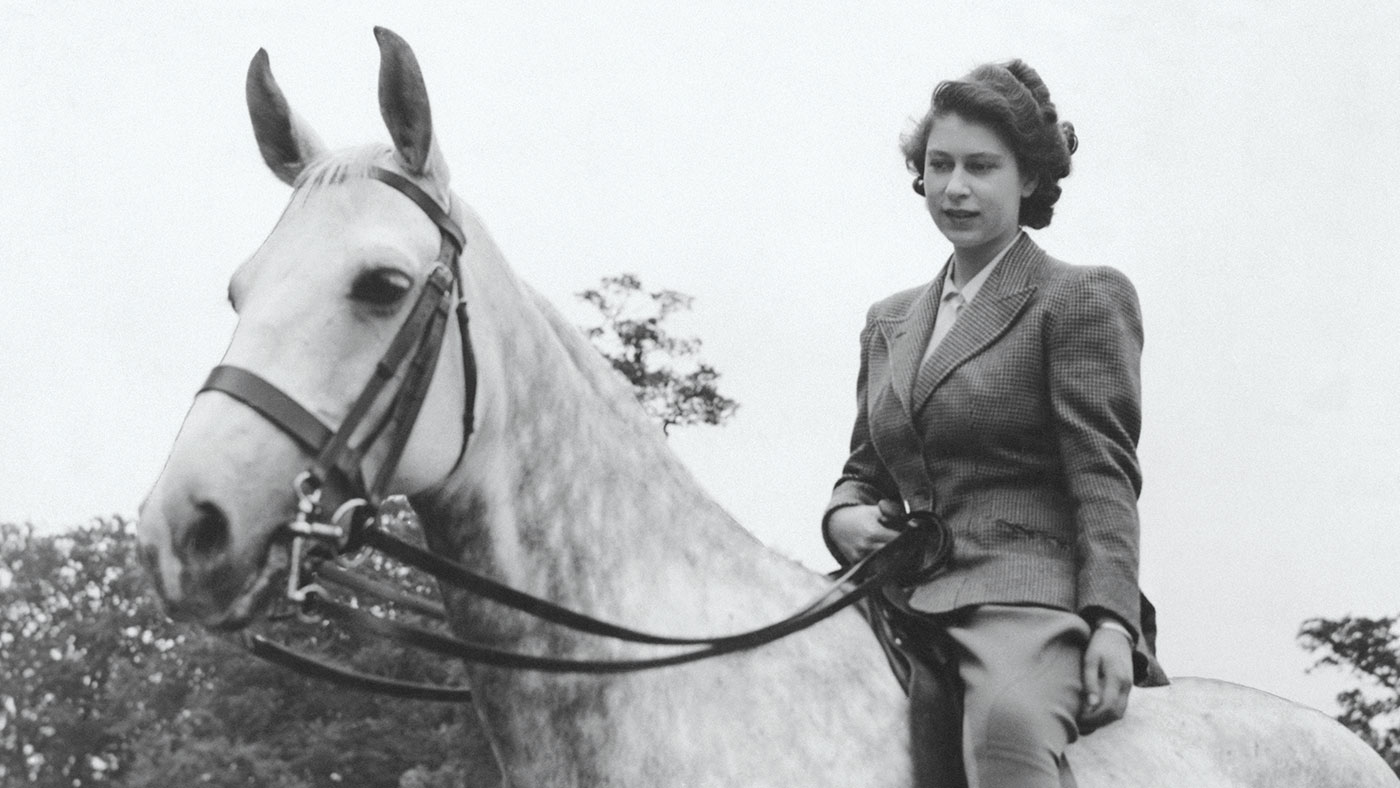 The future Queen, aged 20, cuts an elegant figure on one of her riding horses – she continued to ride for pleasure, and on ceremonial parade, throughout her lifetime 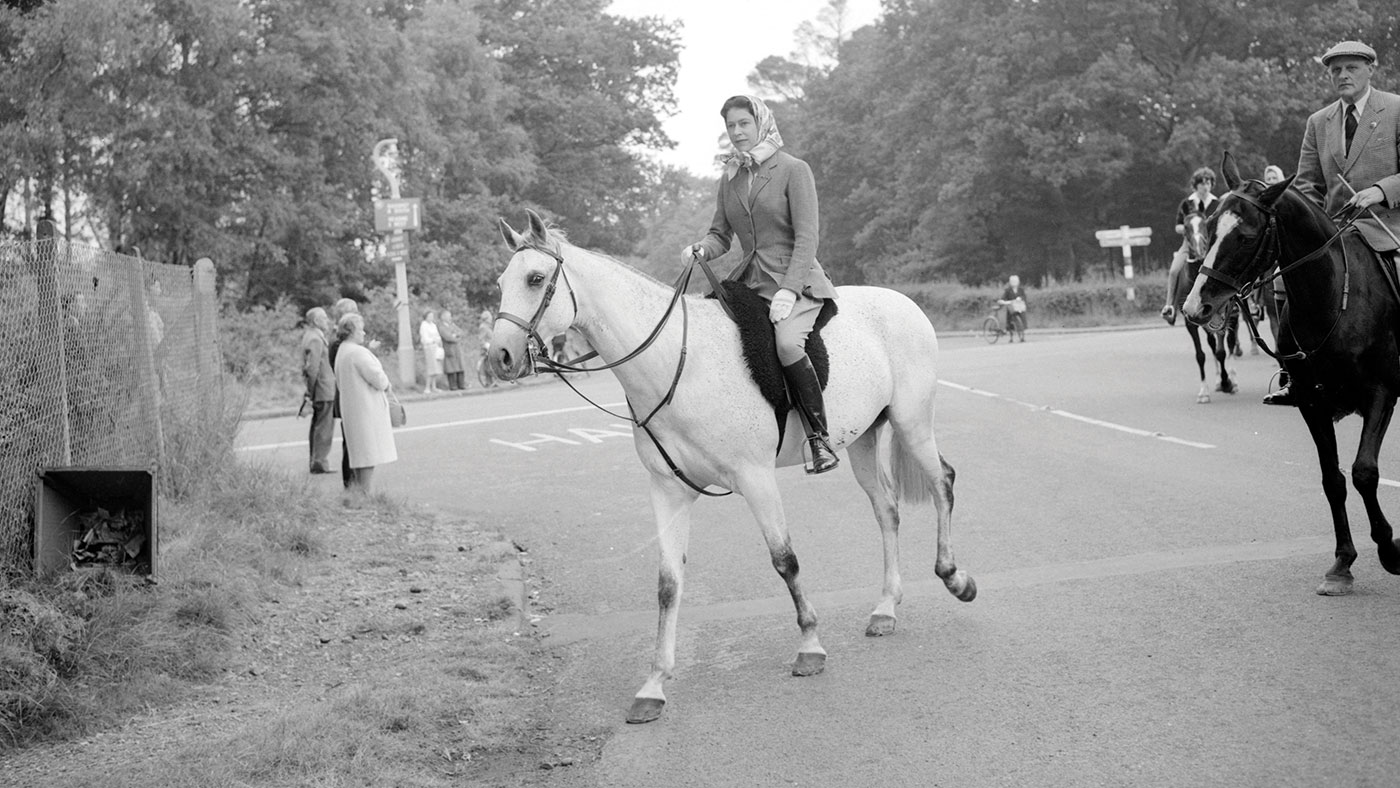 The Queen on her grey horse Surprise, followed by Lt-Col Dawnay leading members of her house party to the entrance of Ascot racecourse in 1961 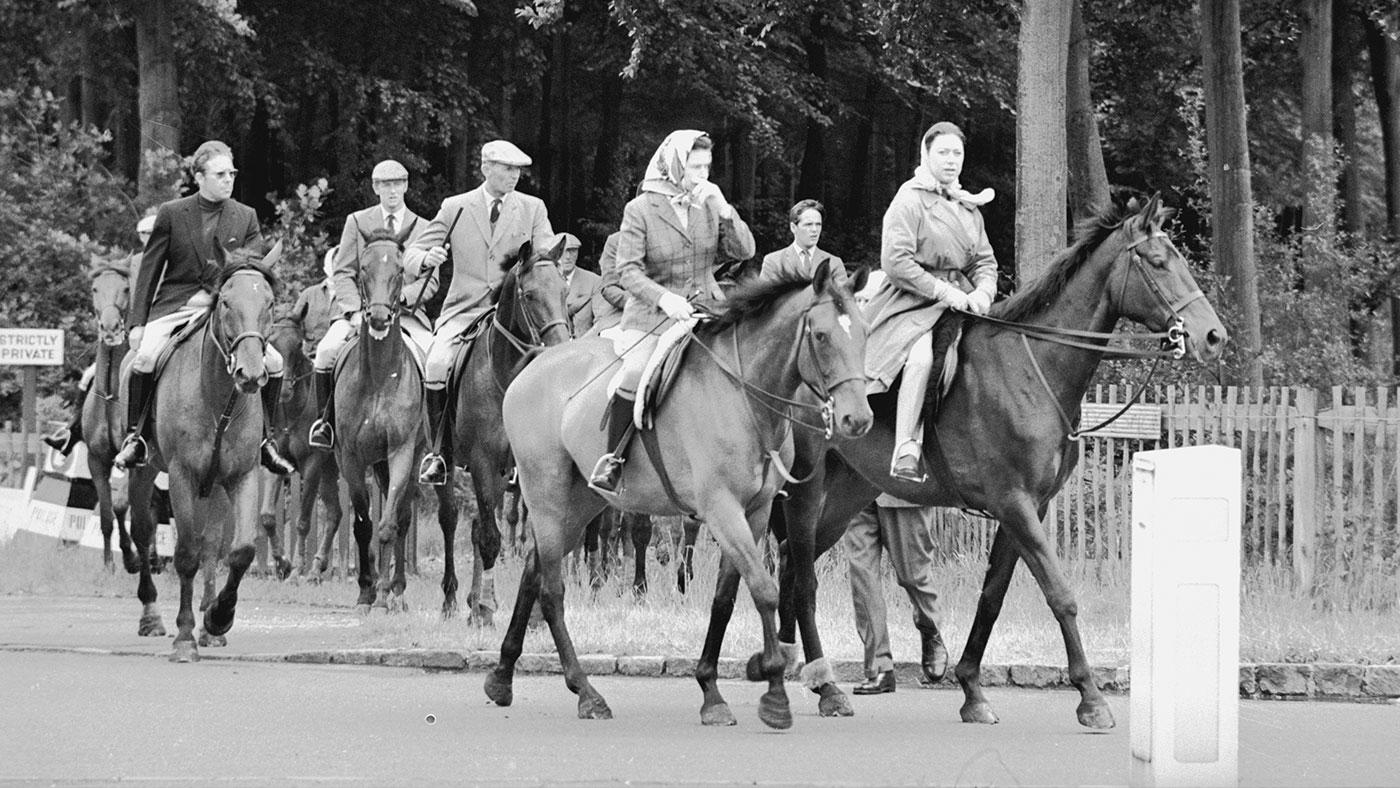 Eight years later, in 1969, The Queen, Princess Margaret and Antony Armstrong-Jones with a group of others on their way to the racecourse at Ascot. The Queen used to hold a house party at Windsor during the Royal meeting, and her guests would ride along the racecourse before racing began in the afternoon 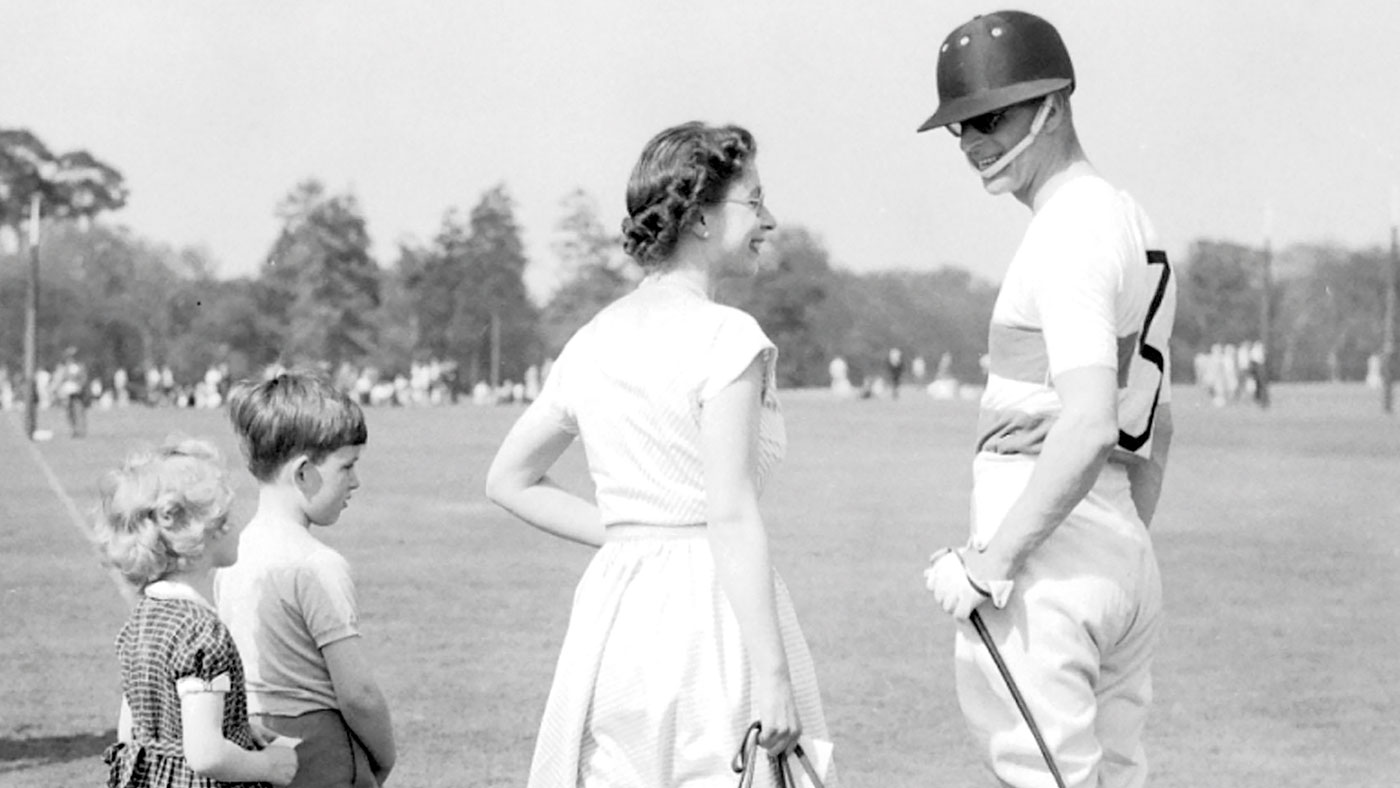 Support on the sidelines: The Queen and Prince Philip chat before a polo match at Windsor in 1956, accompanied by Prince Charles and Princess Anne 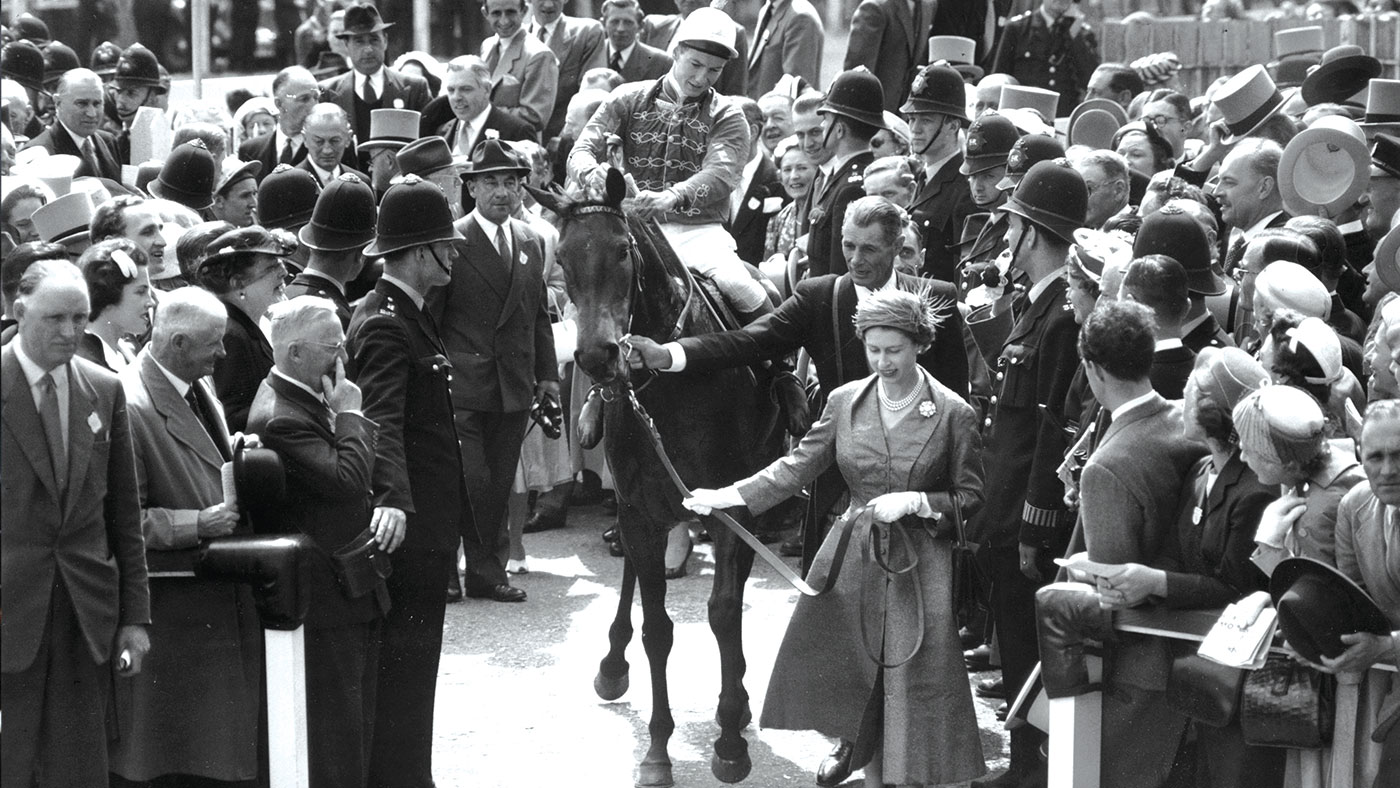 The Queen leads in her filly Carrozza, ridden by Lester Piggott, after she won The Oaks in 1957, the year The Queen became champion owner 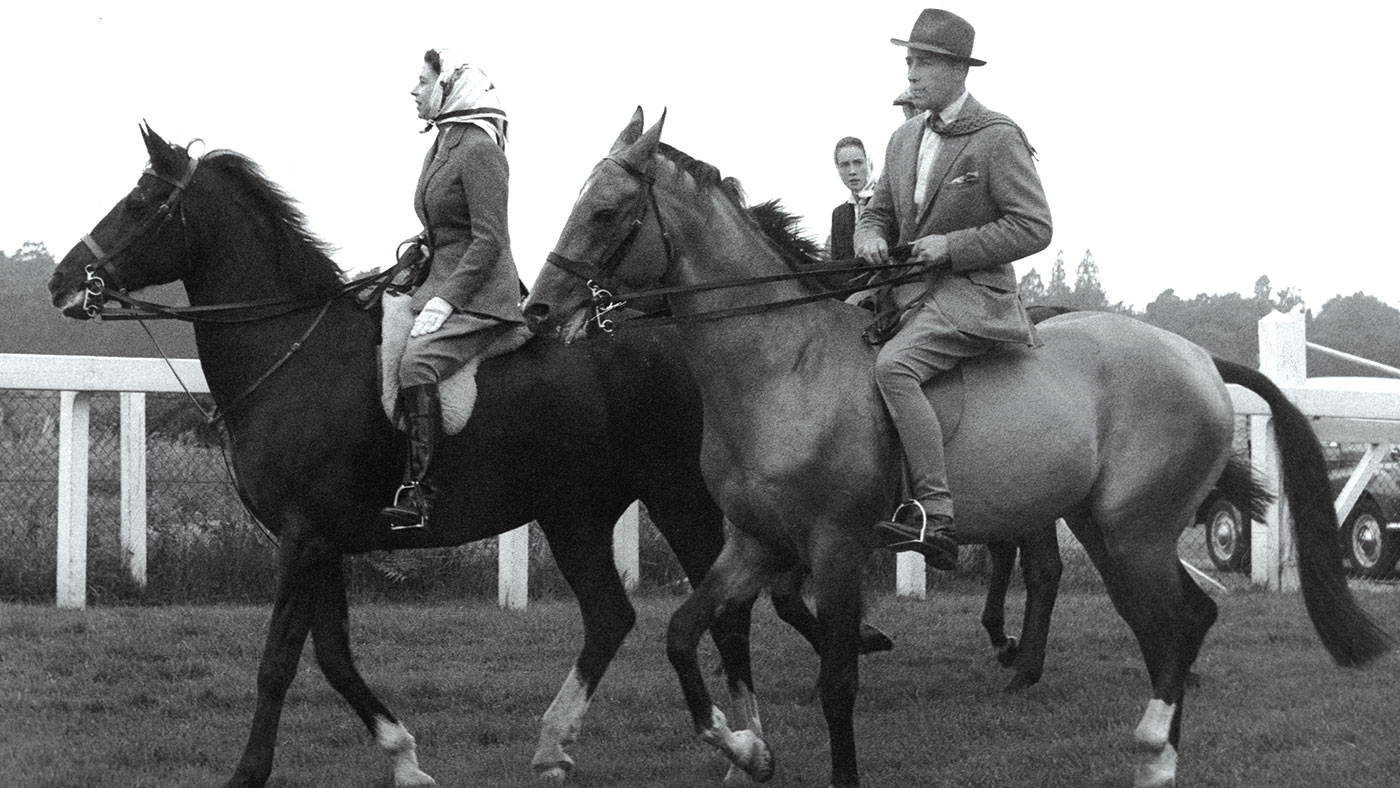 And again on the racecourse before Royal Ascot, in 1956. One year, The Queen narrowly avoided a serious accident when she was galloping along the track. The starting tape was down, and she skilfully ducked just at the last minute to avert disaster 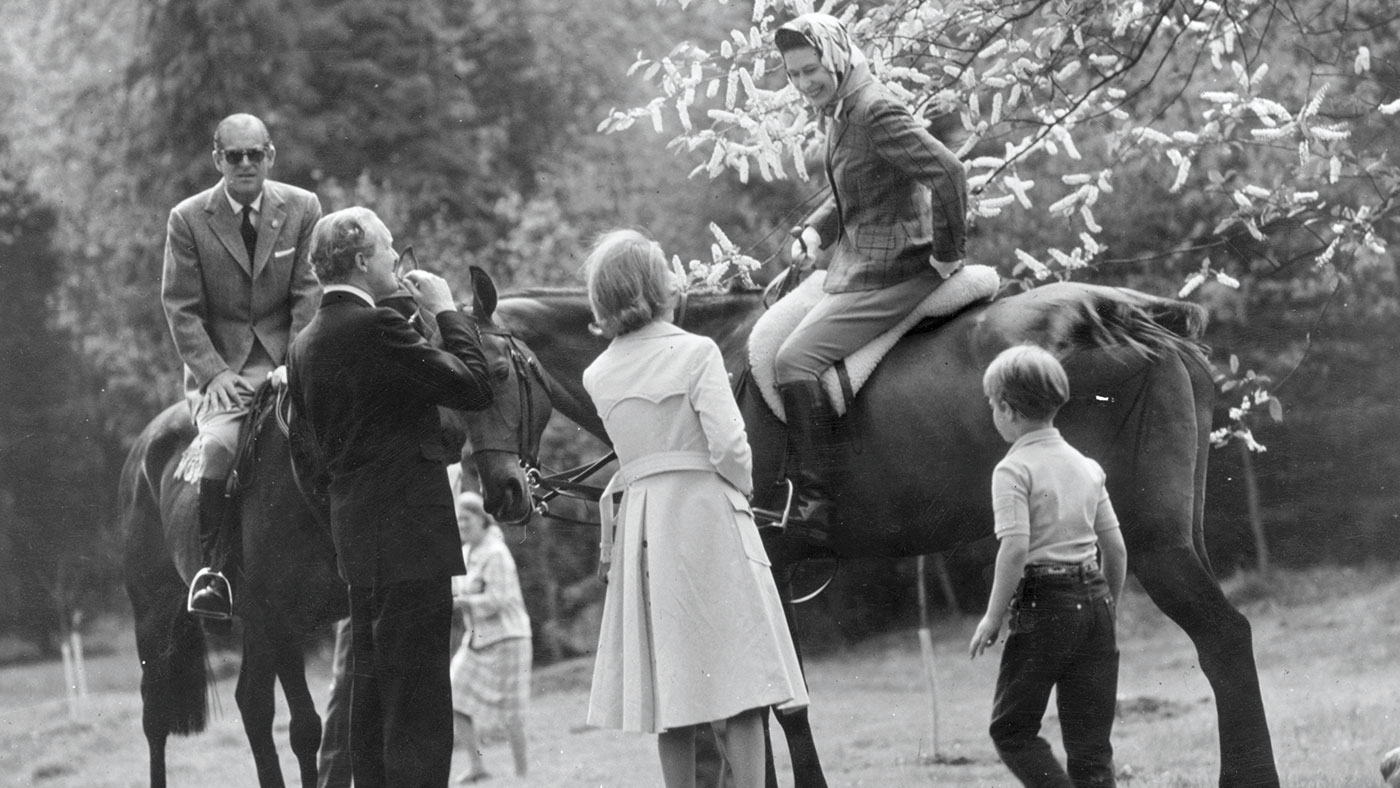 May 1971: Queen Elizabeth II and Prince Philip on horseback in Windsor Great Park, stopping for a chat. Their son Prince Edward is on the right 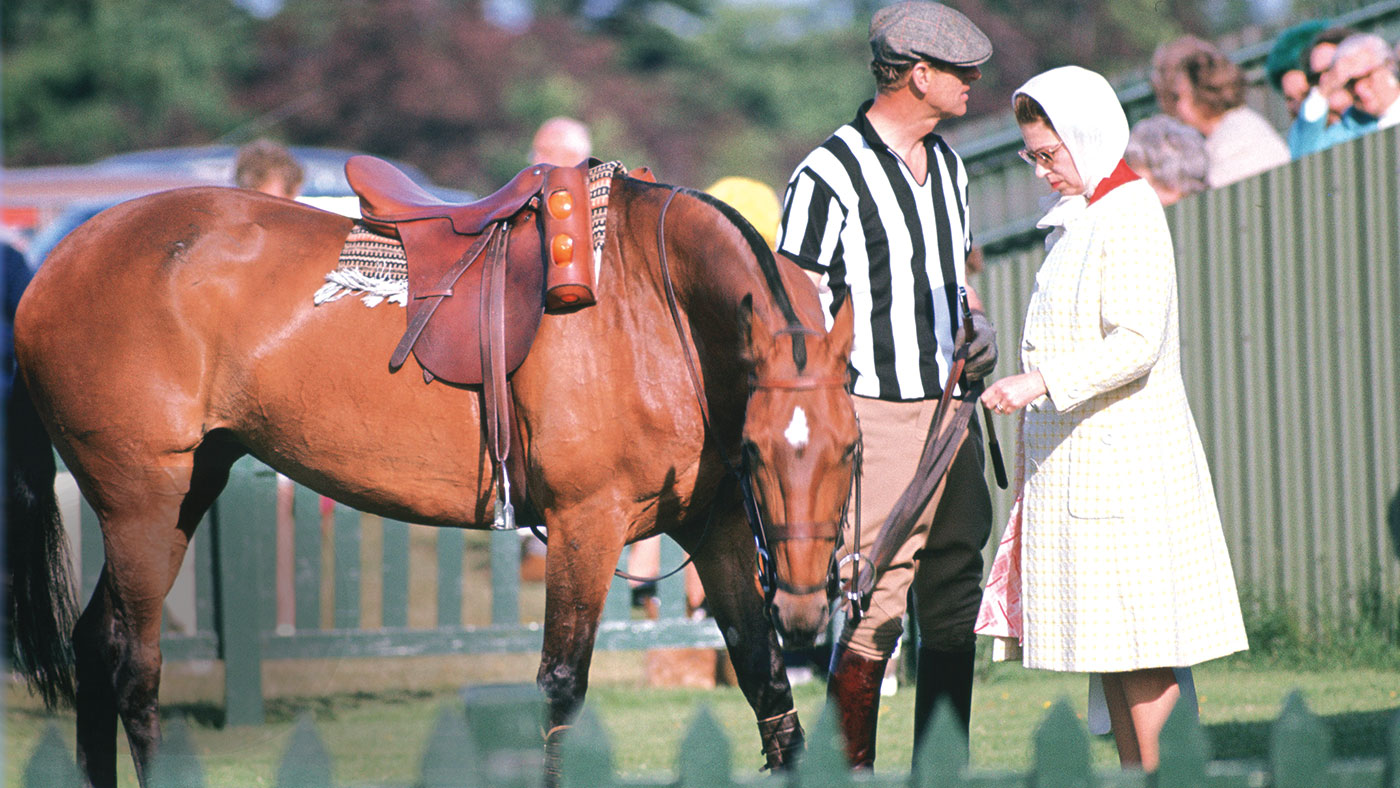 The Queen holds her husband’s polo pony during a break in a match for which he is acting as one of the mounted umpires. The Queen was a big supporter of Prince Philip’s polo career, breeding polo ponies – including one which ended up as Princess Anne’s premier event horse, Doublet 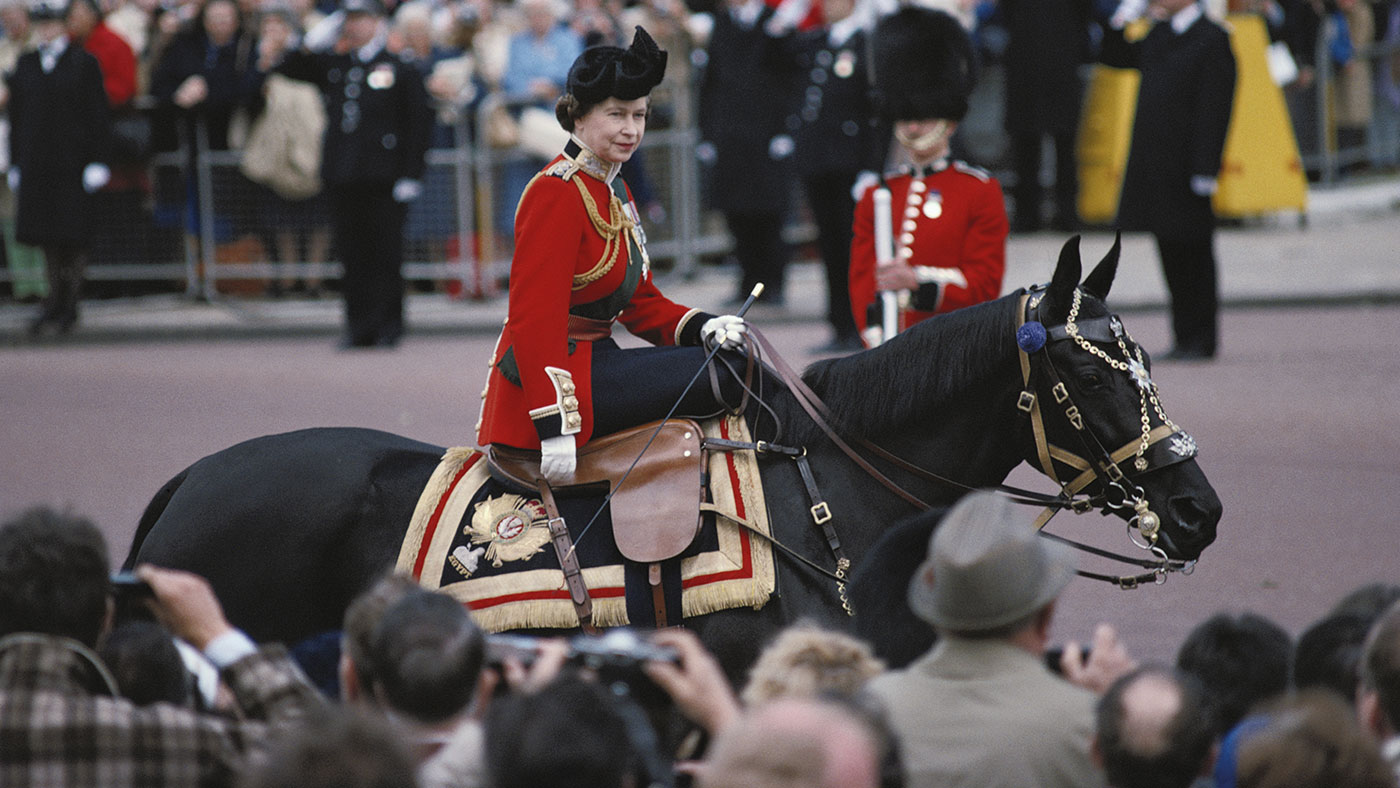 The Queen aboard Burmese in the Trooping of the Colour parade. Burmese was a mare gifted to The Queen by the Canadian mounted police, and she went on to enjoy riding her in parades for 18 consecutive years until 1986. Many years later, The Queen was given a replica rocking horse of Burmese, whom she listed as one of her favourite horses 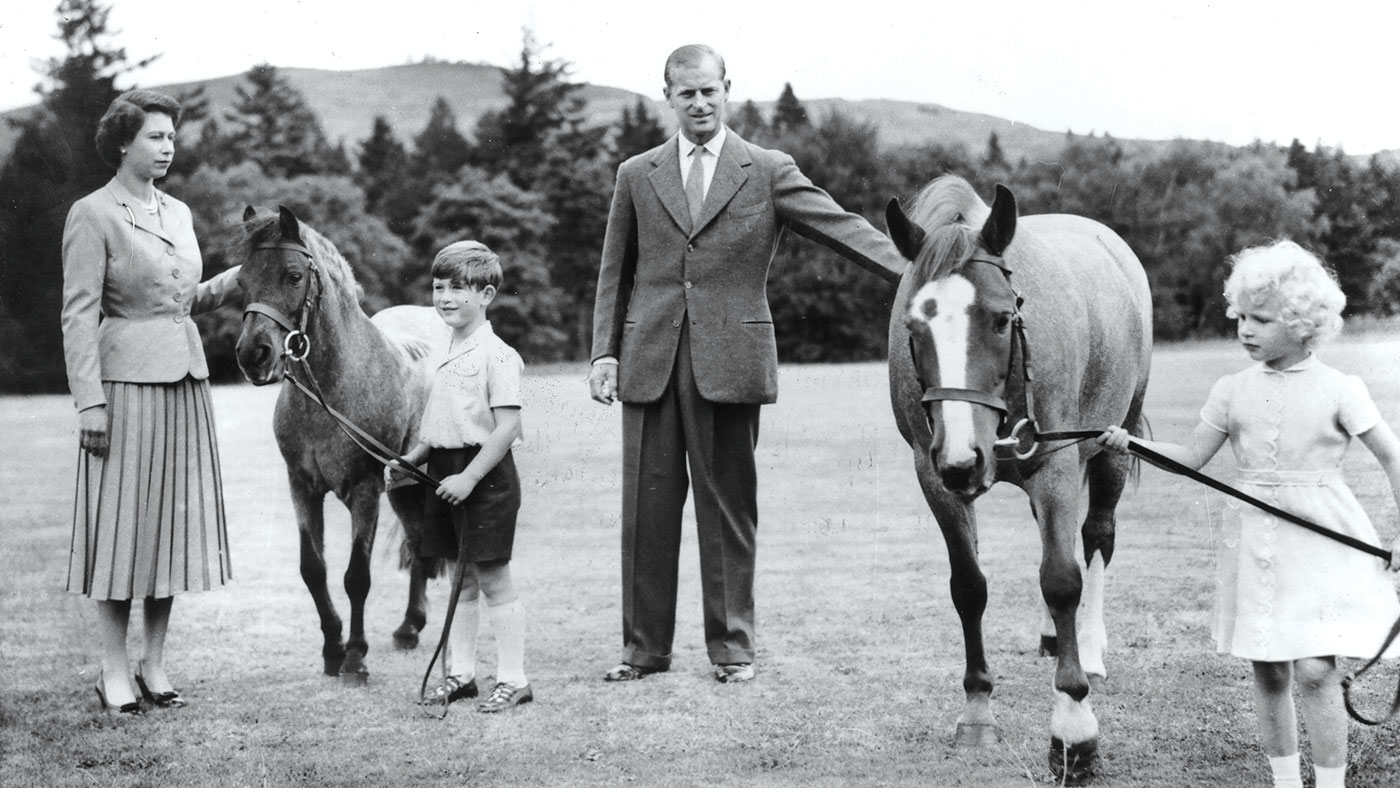 The Queen, Prince Charles, Prince Philip and Princess Anne with the children’s ponies. Princess Anne would go on to become European champion in eventing, while Charles played polo at a high level as well as riding in races as an amateur jockey 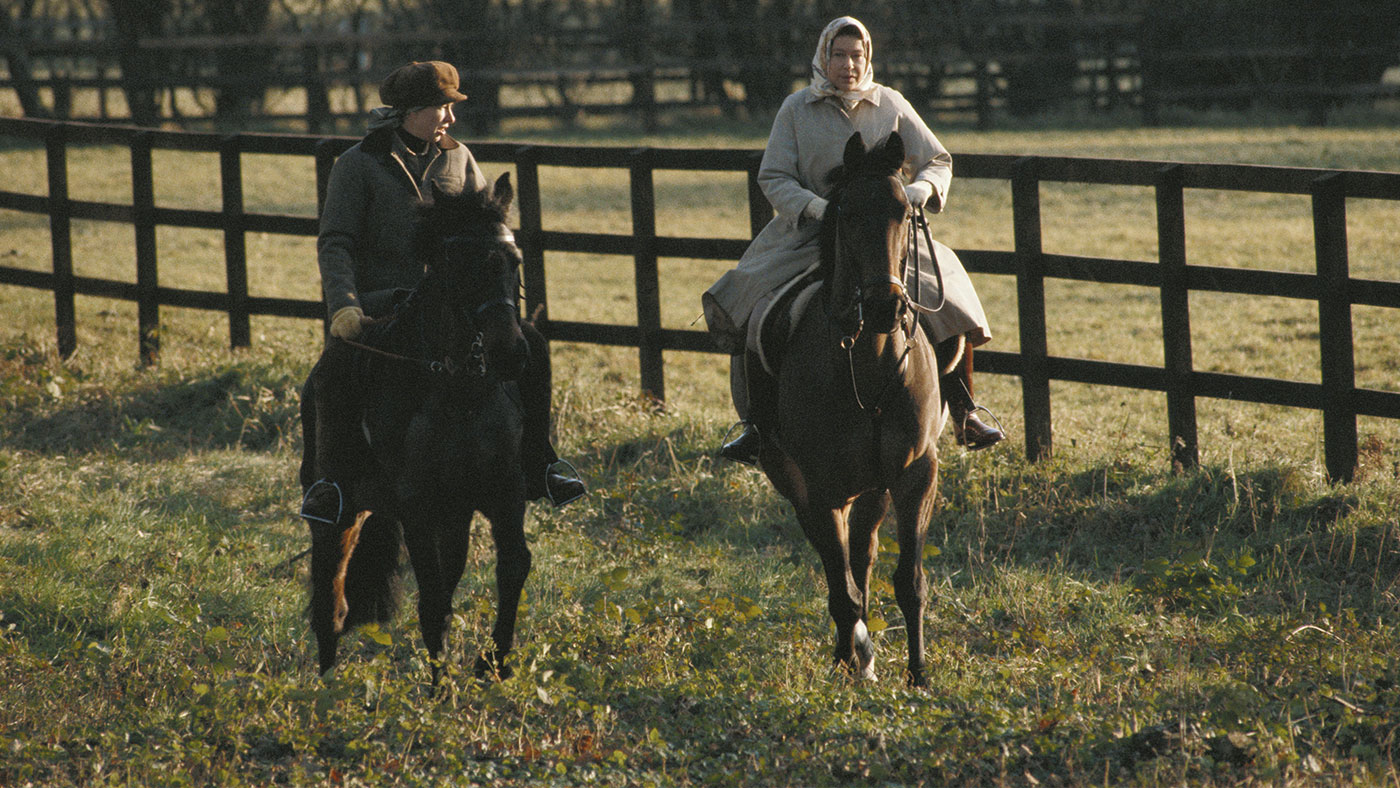 Princess Anne out for a hack with her mother The Queen on the Sandringham estate in Norfolk, in 1979 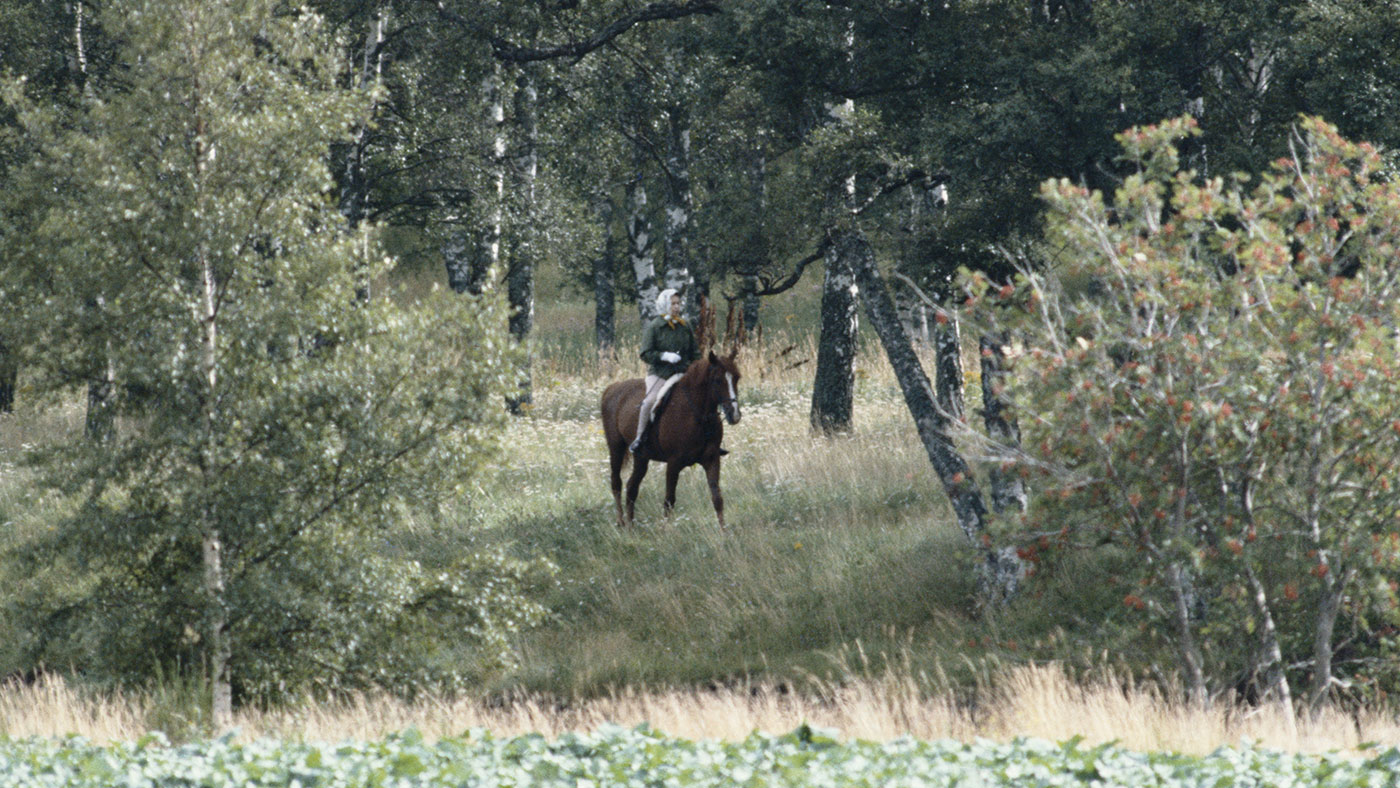 The Queen enjoys a quiet moment out hacking out on the Balmoral estate in her signature headscarf, in 1982 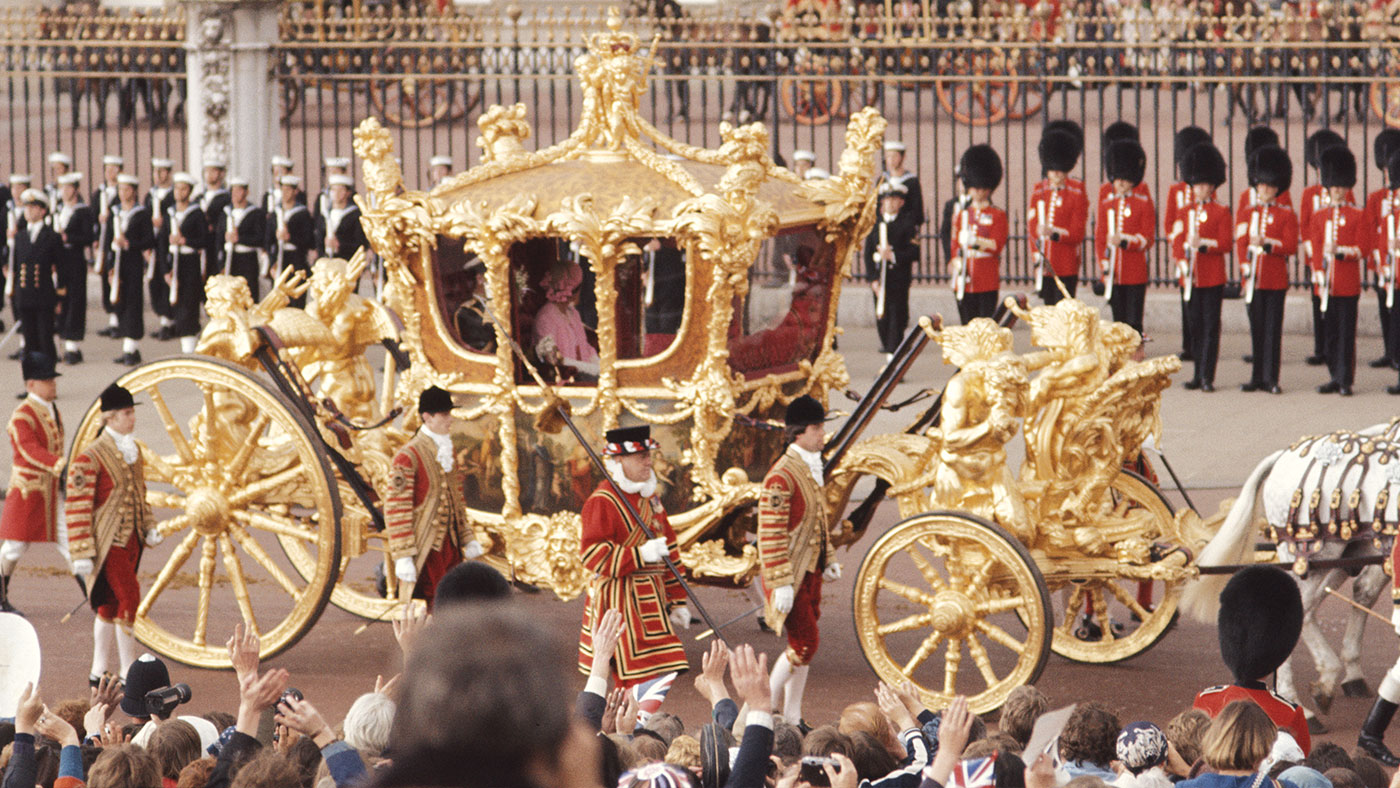 From private ponies to major public moments, horses play their part: Queen Elizabeth and Prince Philip drive past Buckingham Palace in the state coach, during her Silver Jubilee, 1977 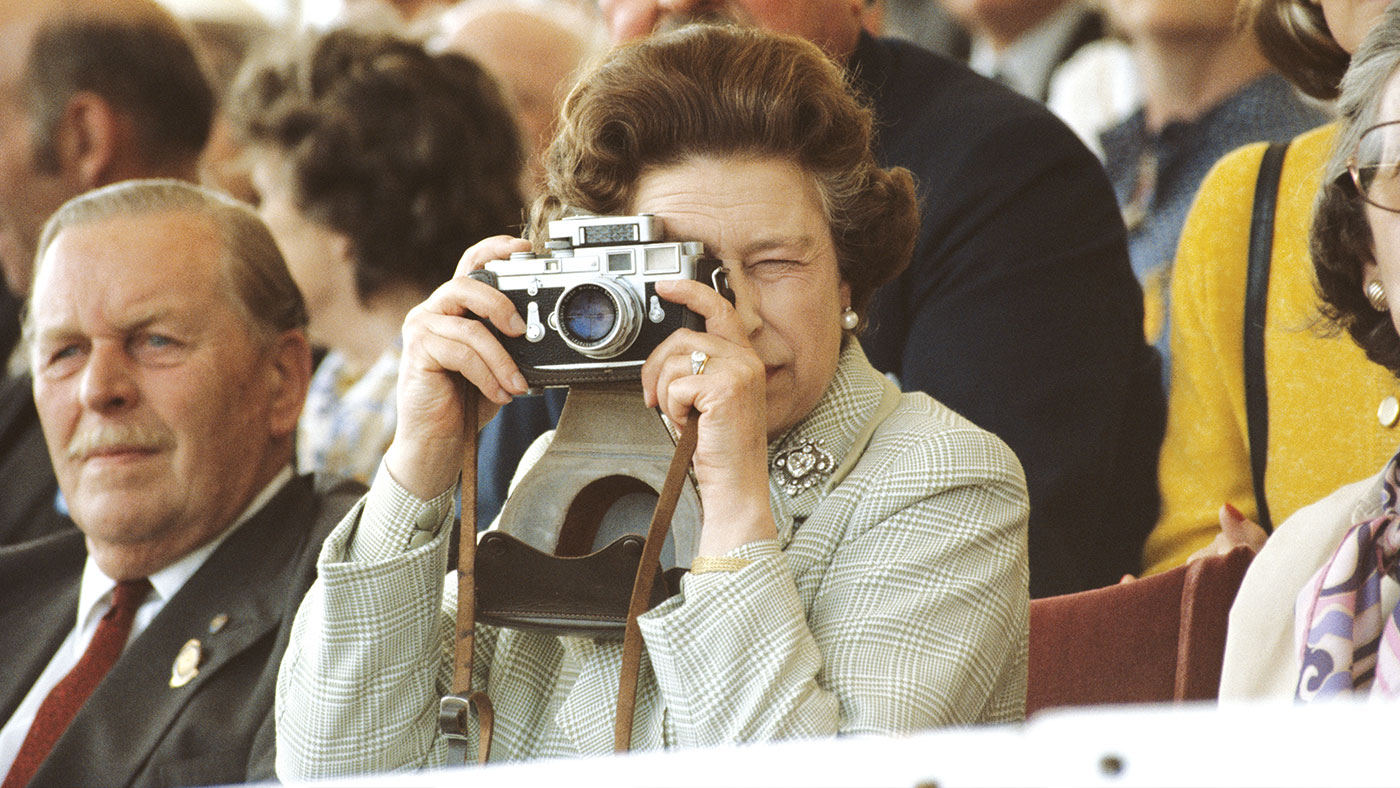 The Queen behind the camera: she was an avid racing fan since she first visited her father King George’s racehorses in person as a teenager 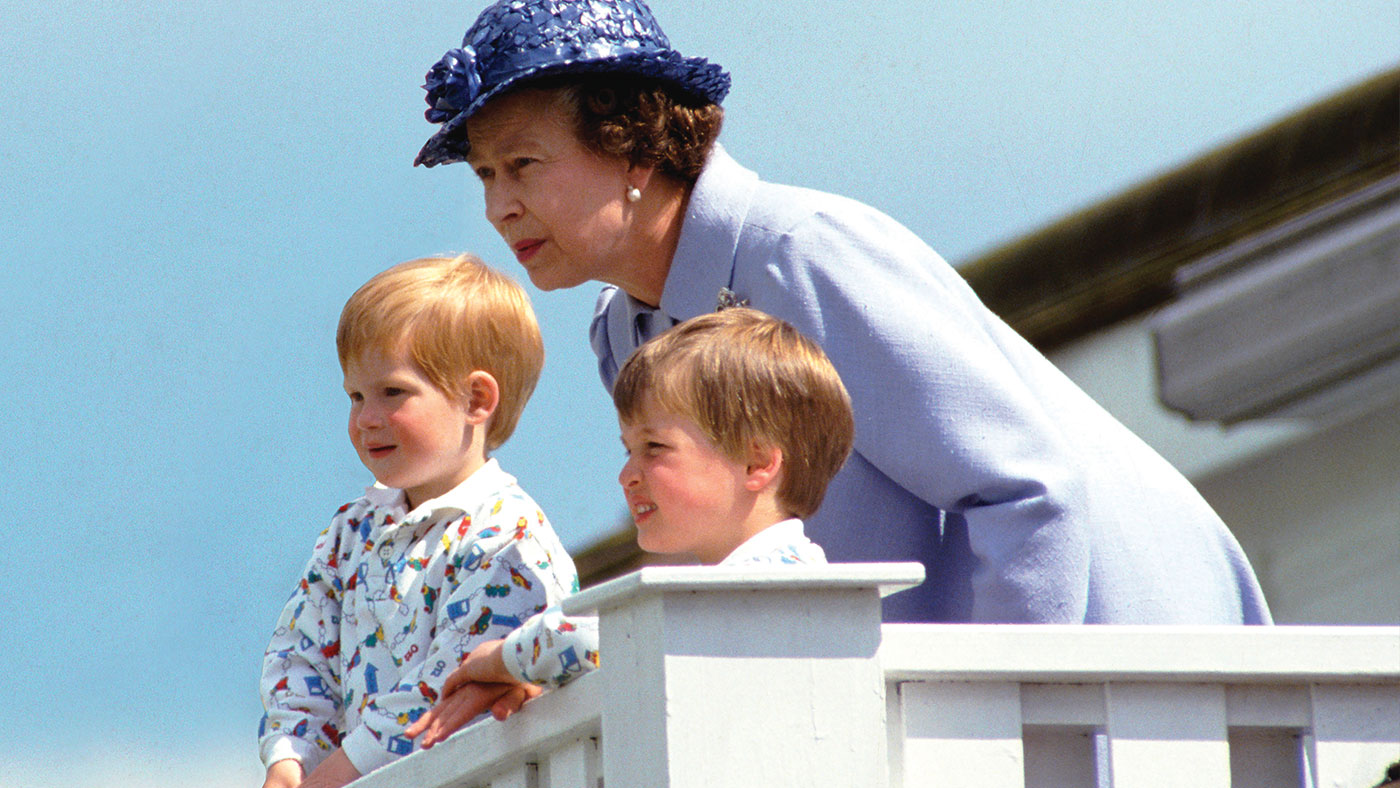 A doting grandmother: The Queen with Prince William and Prince Harry watching a polo match in the Royal Box at Guards Polo Club, Smiths Lawn 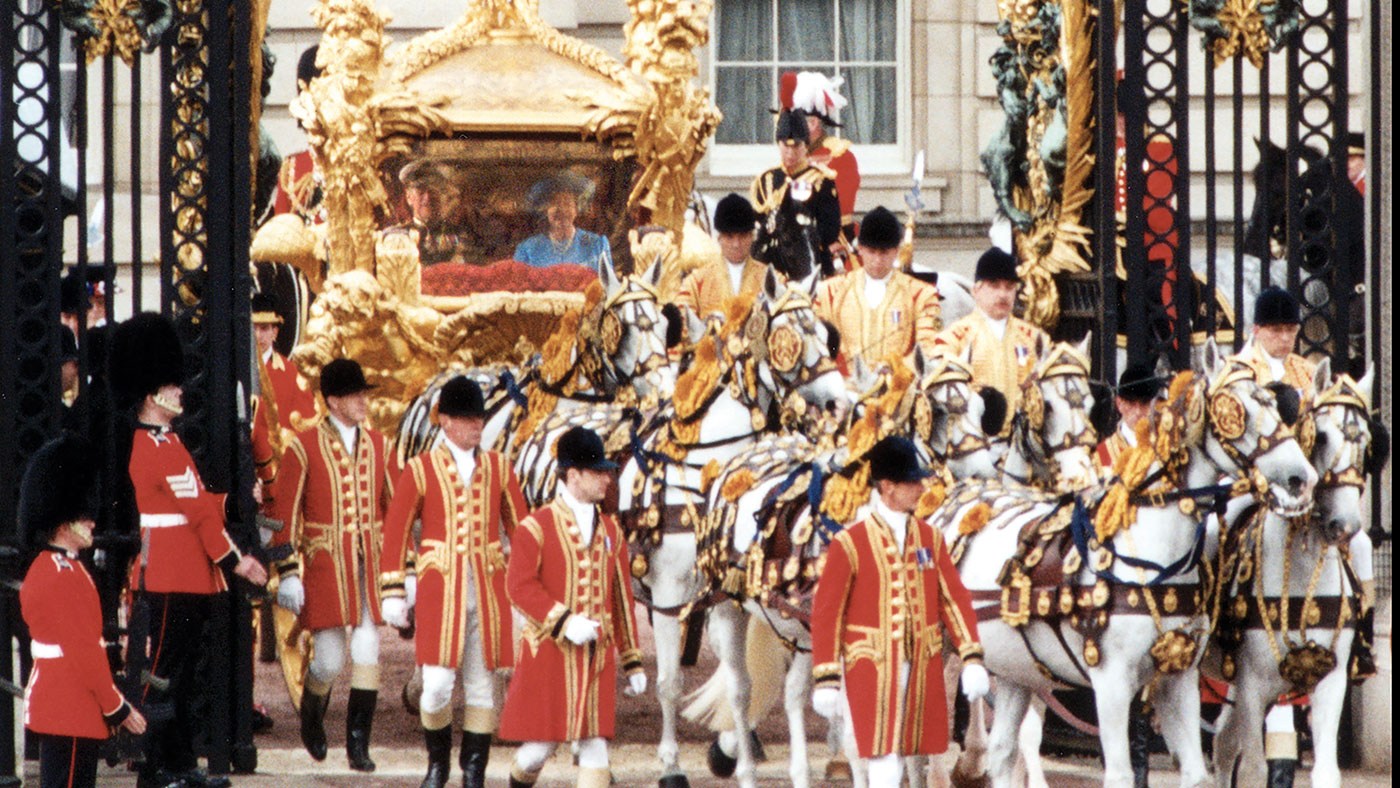 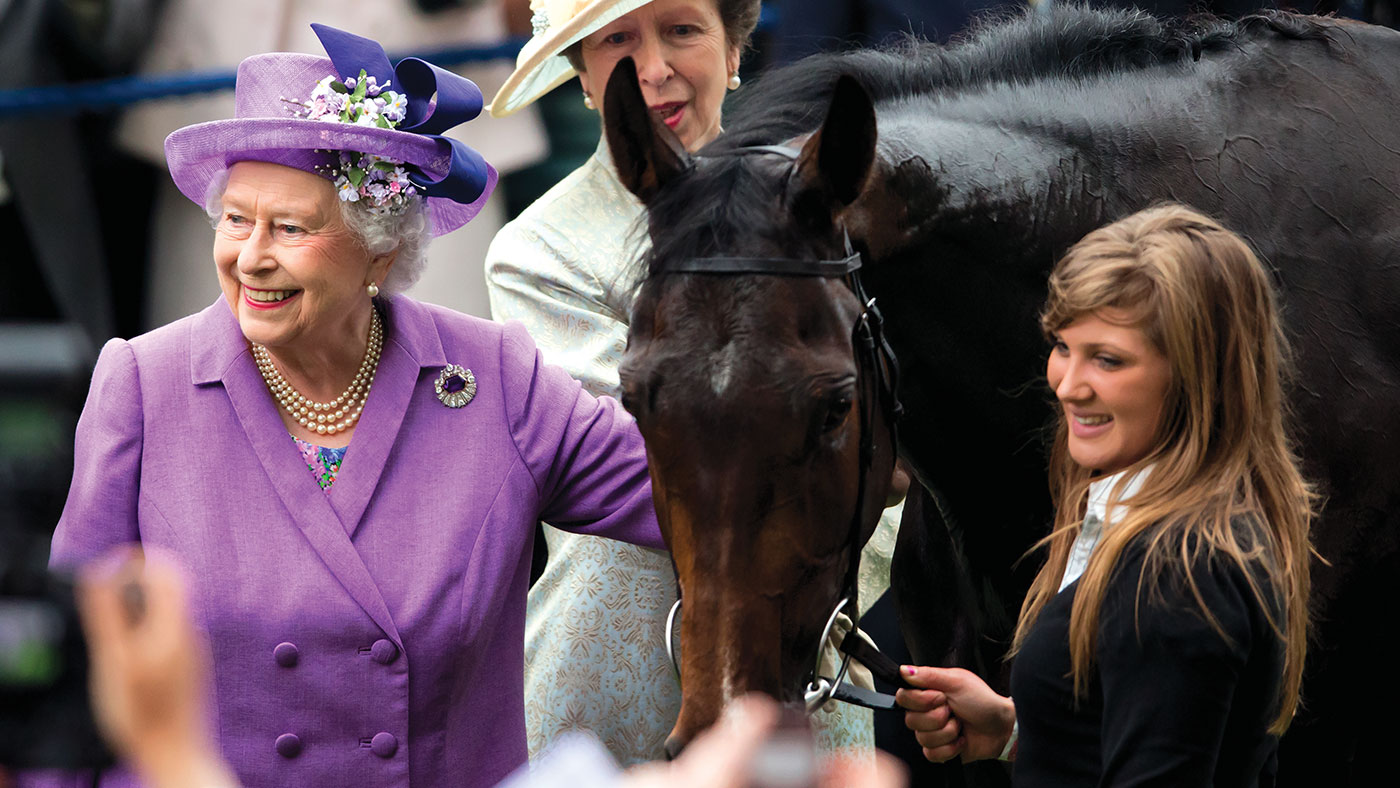 A slice of history: the moment The Queen won the Ascot Gold Cup with Estimate in 2013, the first time a reigning monarch had landed this prestigious race 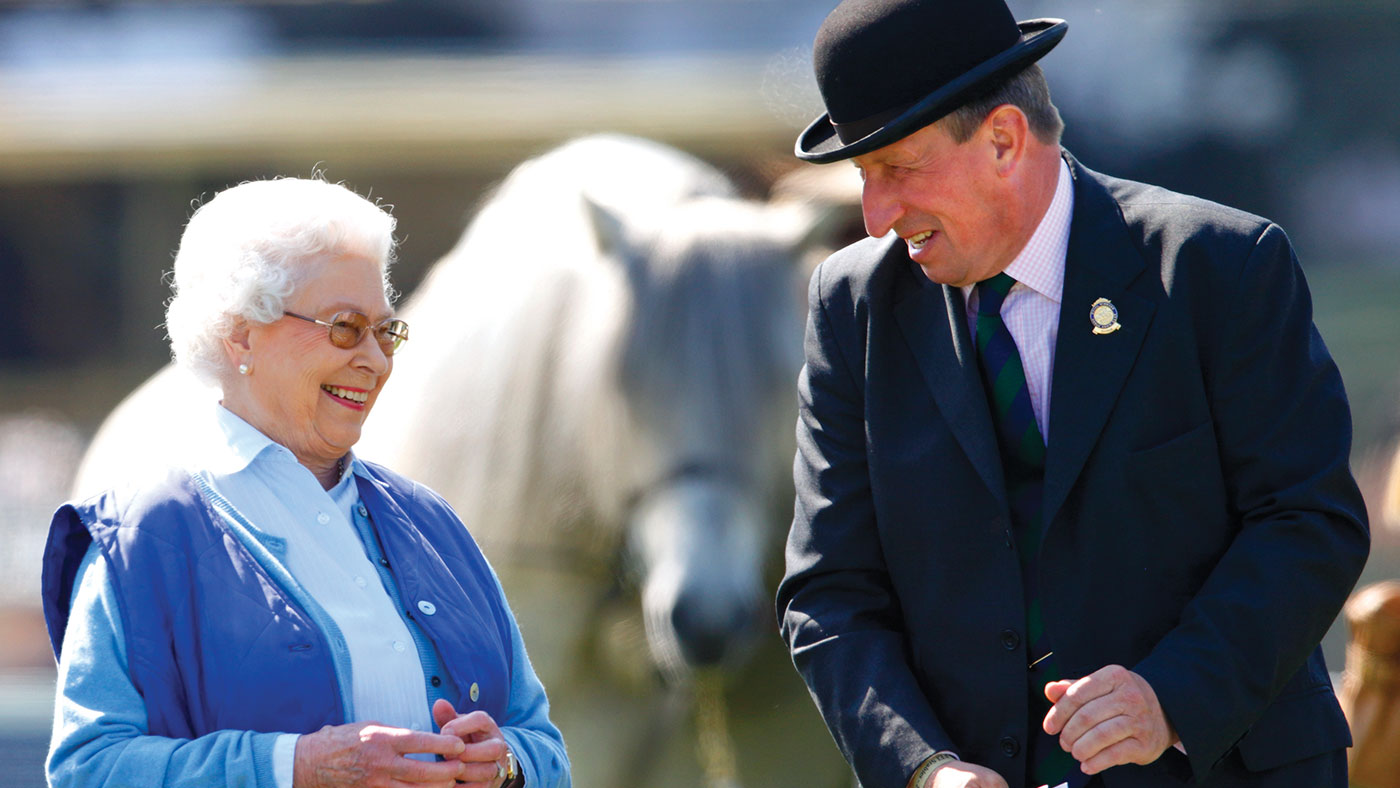 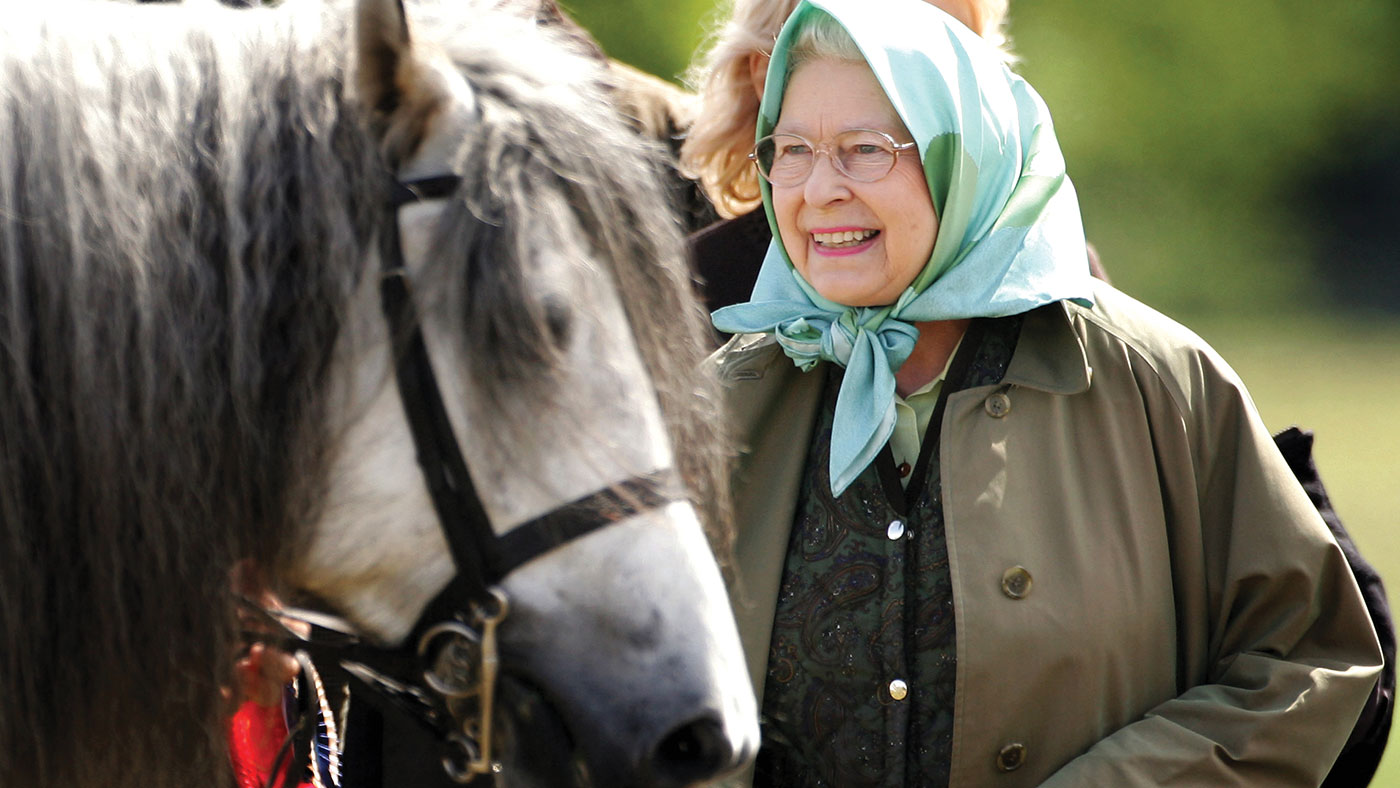 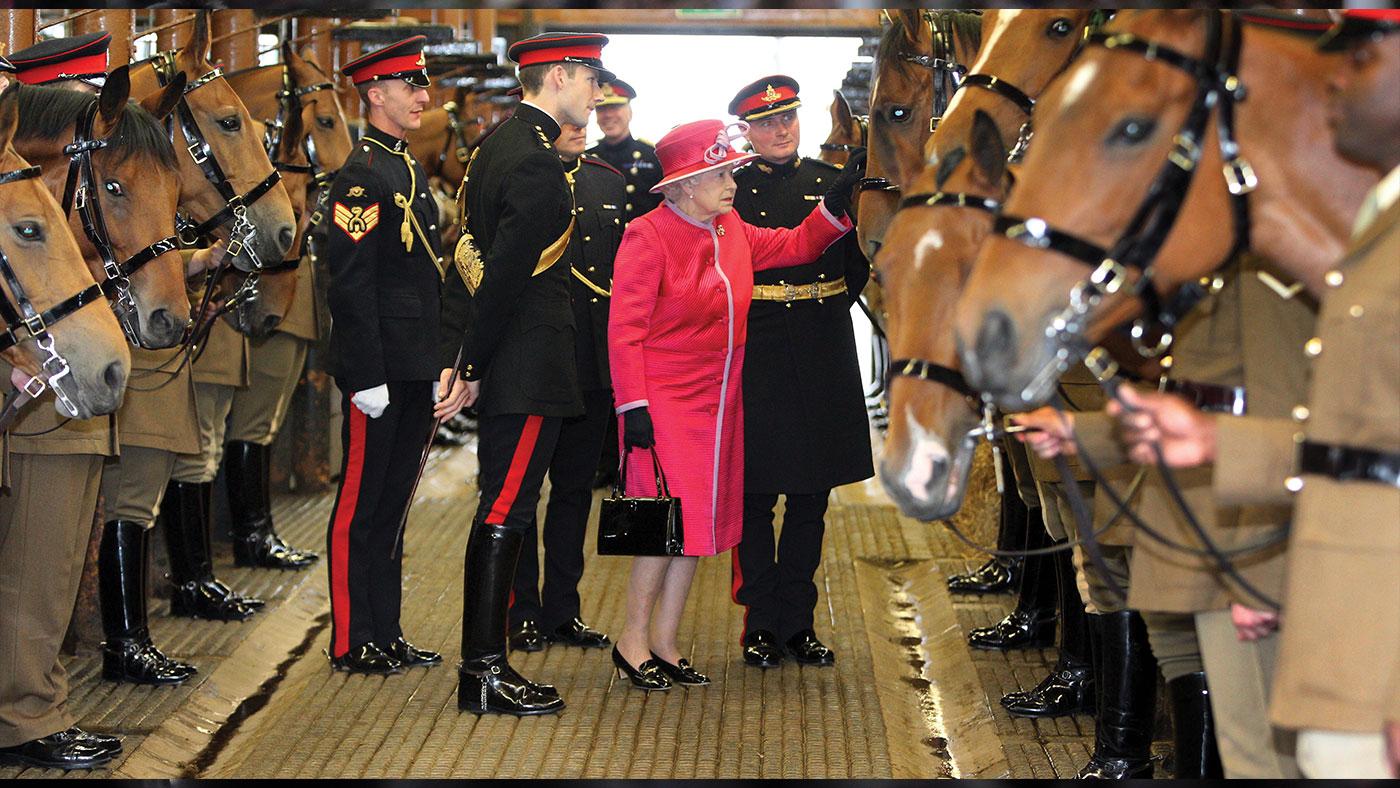 The Queen paid a visit in 2011 to St John’s Wood Barracks (the final royal visit before the King’s Troop moved to Woolwich), to meet Harlequin, the horse she gave to the King’s Troop 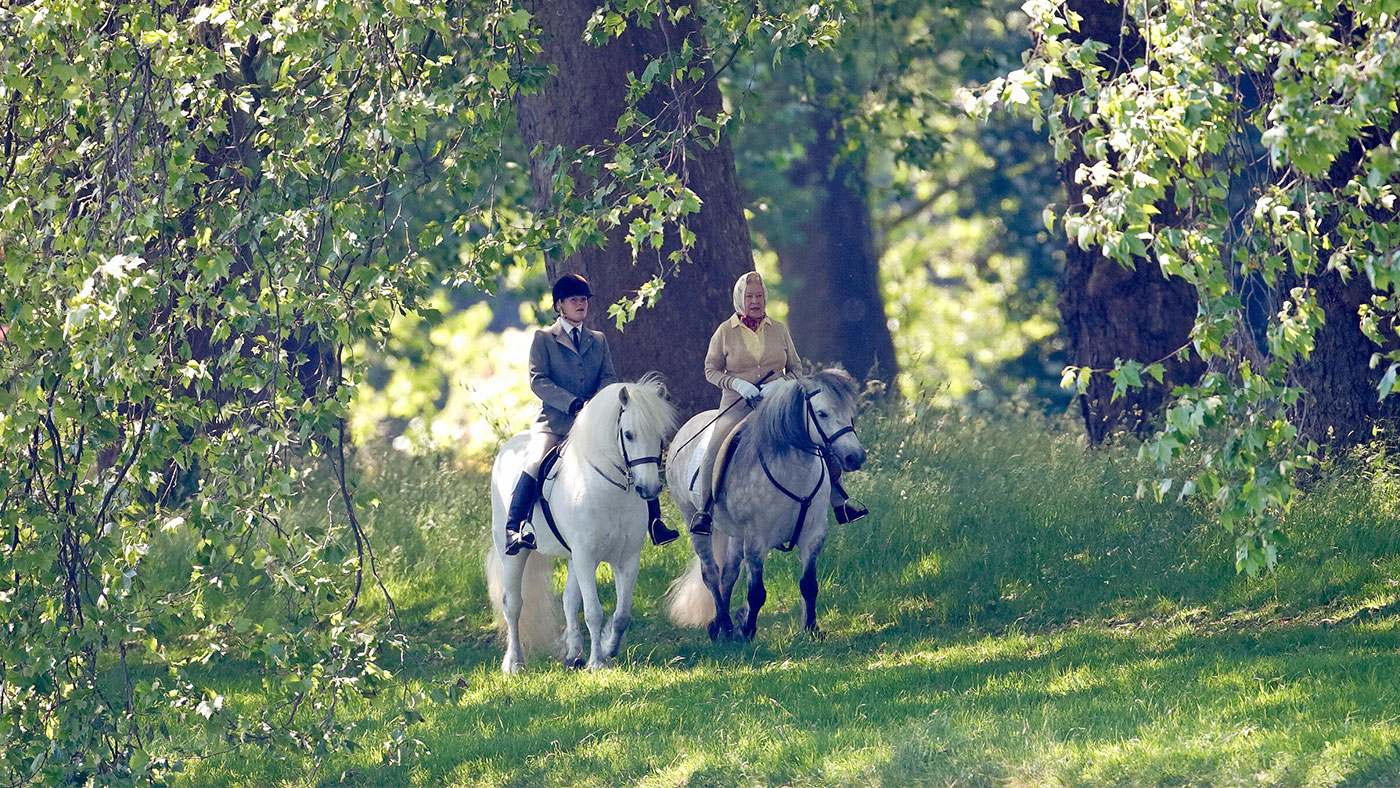 The Queen riding out in Windsor Great Park. Since her 80s she chose to ride ponies over horses – “closer to the ground”, according to stud groom Terry Pendry. However, she continued riding well into her 90s 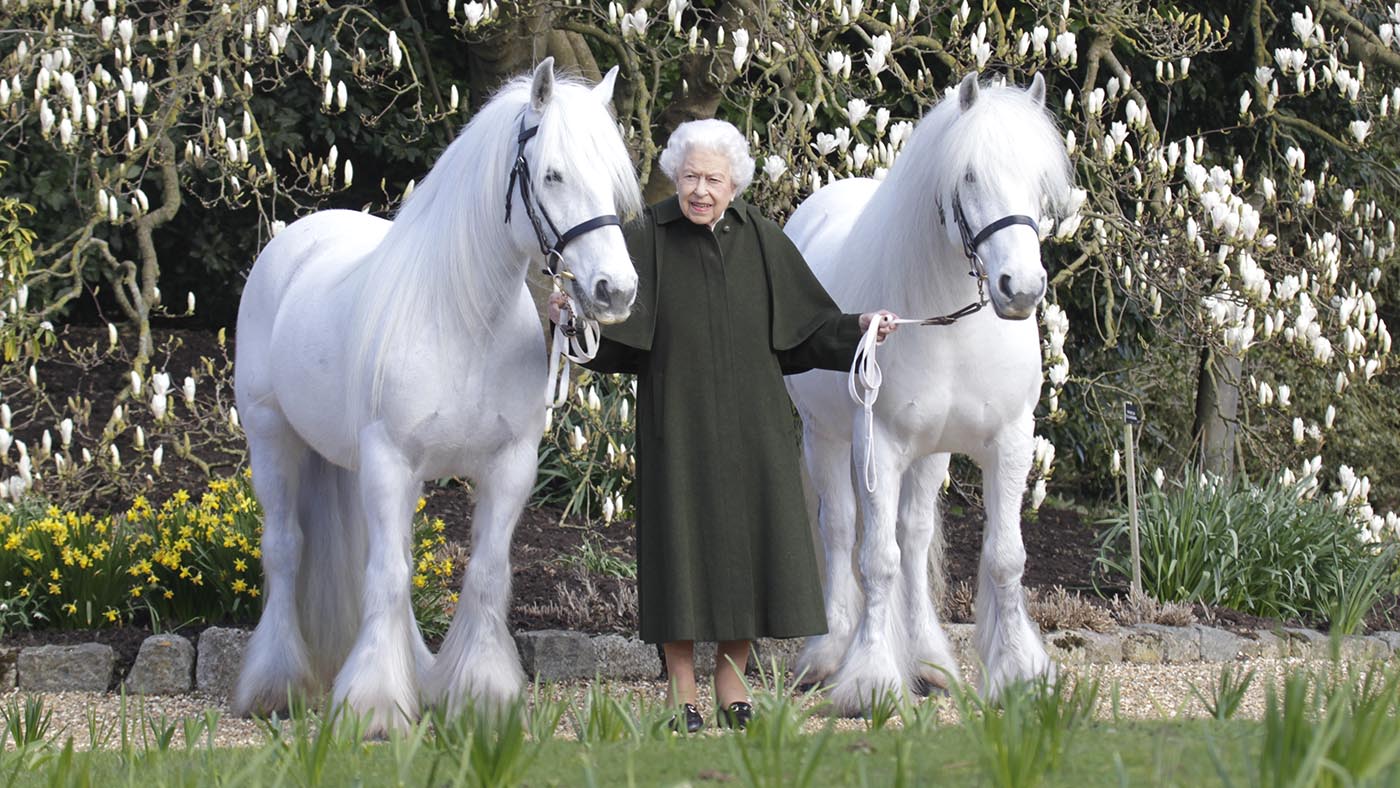 The Queen pictured at Windsor in 2022 with two of her favourites – Fell ponies Bybeck Katie and Bybeck Nightingale. This photo was released to mark The Queen’s 96th birthday

Apprehensive Dad Sees His Lacking Canine Operating Towards Him, However The Canine Is Not Alone