Canines and Cats, Oh My.


I was clearing out the (way too many) photos on my laptop, and ran into this video from years ago. It pretty much sums up the relationship between dogs and cats: Highly variable, and always interesting. Some dogs are best friends with cats, some ignore them, and some either chase them, or try to herd them. Or are afraid of them, often for good reason.

In the video, you’ll see Maggie, on the left, protecting Nellie from Willie. Willie, like many Border Collies (including Skip) perceive cats as weird, mushy-hoofed livestock. Maggie, on the other hand, was protective of Nellie the moment they met. What I love most about the video is Maggie’s facial expression. She is one of the most expressive dogs I’ve ever known, and usually has either a sweet, passive resting face (the real Resting Bitch Face), or radiates joy like a sparkler. She perfectly capable of throwing shade at times toward me or another dog if Princess Margaret feels her royalty is not being honored, but I’ve never seen her look so serious. What Willie would like to do is herd Nellie as if she were a sheep, and on a few occasions, nip at her if she doesn’t obey. Why isn’t she moving away when I approach like a stalking predator? How can I gain control of this creature I am genetically programmed to herd? Poor Willie.

Equally amusing to me is Nellie’s behavior. You can see how stressed she is by Willie’s behavior–as in, not. But is she reveling in Willie’s inability to do what he wants to do? Or just enjoying a nice roll on the rug? Making attributions about mental states is a dangerous game sometimes, but in this case, it’s hard not to imagine that there’s something going on related to Willie.

Skip came to us, reportedly, having never seen a cat in his life, and his behavior reflected that. He looked shocked the first time he met ours, began to chase Polly one night (easily stopped, but Jim, Polly, and I were equally frightened for a long few seconds), and then morphed into trying to herd the cats. He became a dog who was was truly obsessed, and I had my work cut out for me in those early days. At first I couldn’t get his attention when he was staring at a cat. Here’s a video of the process we began bduring the first few weeks, note how “Look” didn’t work, but “House” did. (Which means, “go into the house.”) It looks like nothing, but seriously, this was huge progress at the time.

After a few more weeks, he came away easily at the first try, but as long as Nellie and Polly were here, he never gave up responding to the cats as if they were tiny sheep.

All this got me pondering about how interesting, and varied, are the relationships between dogs and cats. Best friends. Enemies. Livestock. Predators. Prey. Young mammals to be nurtured. Play mates.

As you can imagine, given the topic, it was impossible for me not to fall down the google rabbit hole of “dog and cat videos.” This one cropped up right away, and I include it because 1) the German  Shepherd in the second video is too adorable for words, and the bulldog dog in the third segment scares me because of all the body trapping and neck biting. (Is it too late to rescue that cat, or is it just me?)

I would love to have a conversation about the relationship between dogs and cats. Your experiences? Your thoughts? I’m early in mulling on this, but it does feel like it’s a relationship that is often stereotyped and simplified. But, it feels far more complicated and interesting than is often given credit. I’d love to give it our attention.

MEANWHILE, back on the farm: We are just back from the Star of the North Sheepdog Trial in Minnesota last weekend, and what a gorgeous weekend it was. Here’s the view Friday morning from our camper:

The colors were non stop: 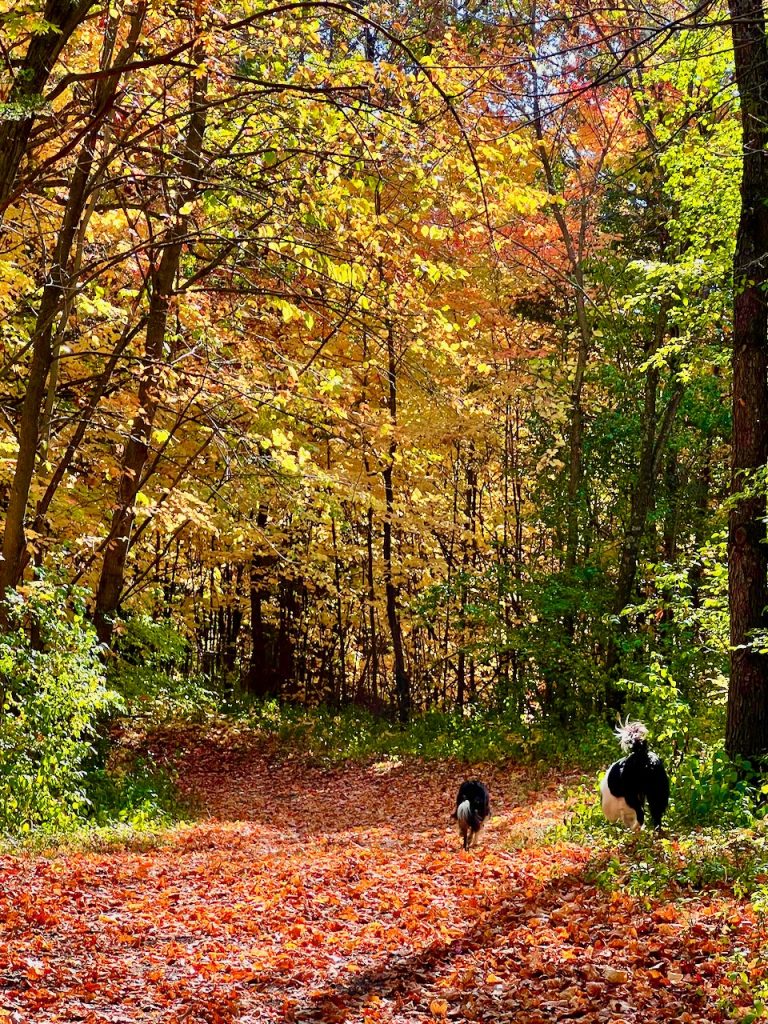 I was disappointed in our runs though. Skip ran too wide on his outrun on his first run, missed the sheep completely, and then flanked so wide when I asked him to go back toward the sheep that he ended up at the set out pens. Finally, after about THREE YEARS, he came back to me calling him, and got on the sheep. We had a lovely run after that, but of course, lost a gazillion points. His second run had a good outrun and fetch, but we got beaten by a wily old ewe who took advantage of me stopping Skip short a few times, and we had a mess of a drive. I feel badly that I let him down. He runs waaaay too wide, especially when he is stressed, but, still, I didn’t do my job well enough. Sigh.

But, still, it’s a game, right? It was gorgeous all weekend, if a bit nippy. Okay, it was really cold the first day, in the 30’s and low 40’s, but when you’re surrounded by this, how bad can it be? 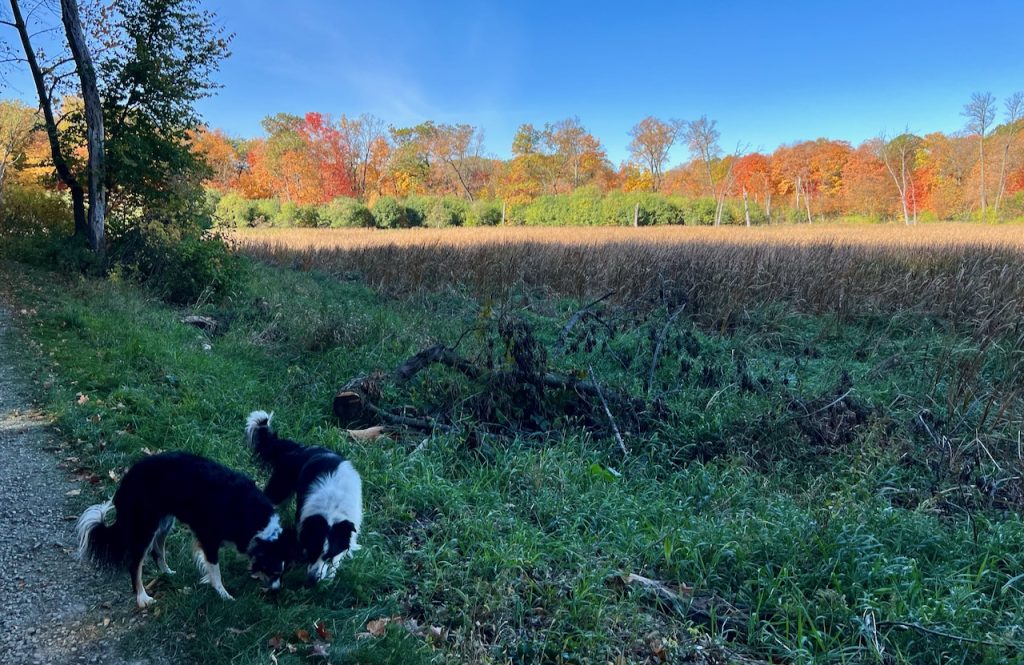 On Sunday Maggie and Skip got to help set out sheep for the Novice runs, and had a great time. Here’s where we were forced to work. Poor us. 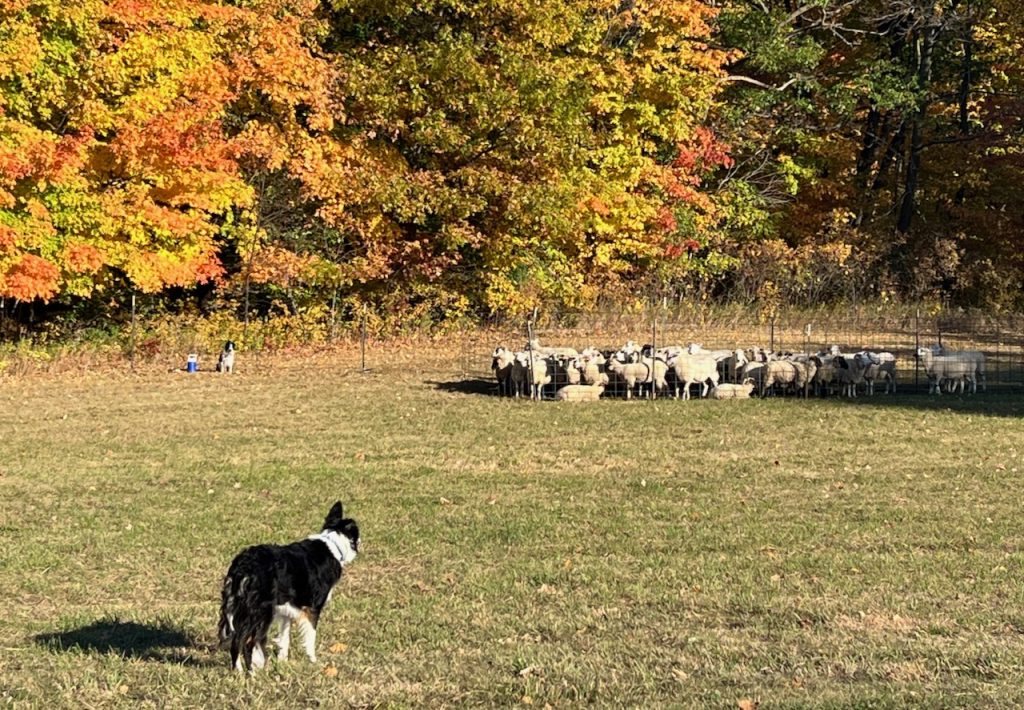 Maggie and Skip traded off, while hard working Samantha (out of the photo) let four sheep at a time out of the pens. Thank you Samantha for making it easy for me, and to John Wentz who did the better part of the setting out. We were just the transition team (it was a long way from the pens to the set out, and over the crest of a hill), but we had a great time. Thanks to Pearce Ward for putting on such a great trial, and to everyone else who worked so hard to make it so. (I’m especially talking to you Claudia and Maddie!)

After the Novice class was over, Skip got to move the sheep that were left over to the other set out pens for the Open class. We enjoyed it equally–I love real work and never get enough of it on our little farm with our tiny flock and small pastures. 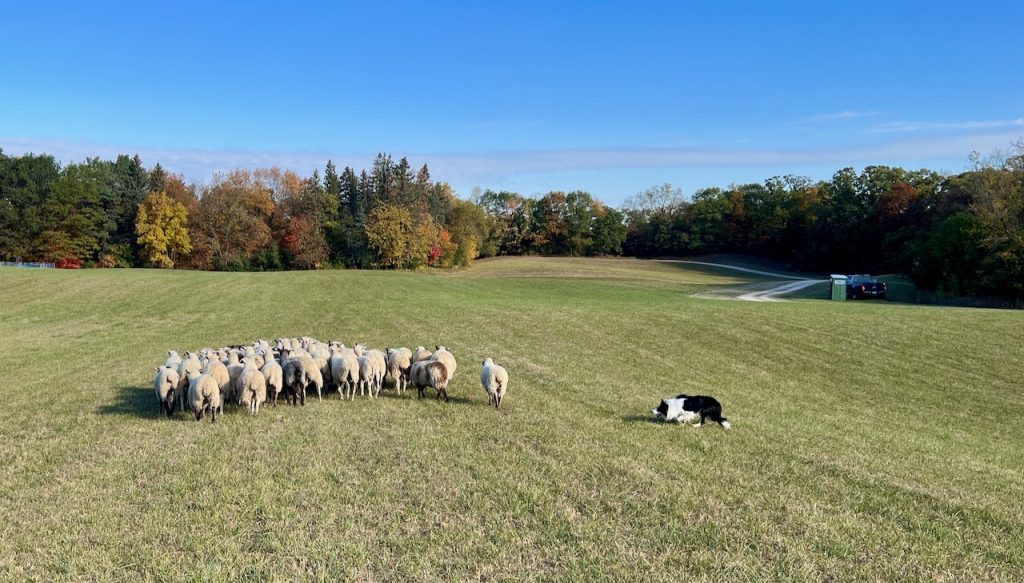 I hope there was lots of good in your weekend too. Tell us about it, and add your thoughts and experiences of dogs and cats getting along. Or not. You know, like “cats and dogs.”