The subtitle of Jackie Higgins’ book Sentient:  How Animals Illuminate the Wonder of Our Human Senses, aptly sets forth her thesis – though the “wonder” it refers to could equally well be used to describe animal (not just human) senses, as she shows in fascinating detail.

By senses, Higgins means more than the standard five (touch, taste, smell, sight, hearing) identified by Aristotle.  Scientists estimate there are twenty or thirty separately identifiable human senses.  So, of her thirteen examples, one per chapter, some are the expected ones:  the sense of taste (for which the subject is the Goliath catfish, which does not possess a tongue, but whose “whole body is their tongue”) and the sense of smell (discussing the bloodhound and, among other topics, the devastating effect of loss of the sense of smell on humans.)  As one anosmic patient of the late neurologist and author Oliver Sachs said, “it was like being struck blind.”  (Sachs’s case studies and writings are referred to a lot in Sentient.)

Other of Higgins’ examples are not so familiar but make perfect sense, pun intended, and make for fascinating reading.  The vampire bat is the vehicle for a discussion of what Higgins calls the human sense of pleasure and pain (but not, as to the latter, for the reason you might think).

The altruistic vampire, back at the roost after a meal of horse or cattle blood, will regurgitate the blood to feed not only her own pup, but other adults and their pups too, all of this prompted by being groomed by the donee and, in particular, by being licked on the lips.  This example leads to a discussion of such (seemingly, but not really) disparate topics as the results of small, insignificant touches on the arm by waitresses (scientifically proven:  bigger tips) and other fleeting physical contacts between humans which can be “mysteriously potent.”  As Higgins shows, there are suspected biologic, anatomical reasons for these phenomena, and for (when they break down) malign effects like neuropathies and chronic pain.

It is reasonable to assume that you – you reader of this blog – howevermuch you may have interest in the starnose mole, the common octopus, and other of Higgins’ zoological examples — you like birds best of all.  For you, there are two Sentient chapters of special interest titled, respectively, “The Great Gray Owl and Our Sense of Hearing” and “The Bar-Tailed Godwit and Our Sense of Direction.”

As late as 1963, Higgins says, there were various theories that sought to explain the hunting prowess of owls – smell, night vision, the ability to detect body heat.  Now, we know that owl hearing is extraordinarily acute, able to perceive the faintest rustlings of a vole under heavy snow.

Moreover, says Higgins, there are “astounding similarities between the inner ears of owls and of humans,” so strong, according to one neurobiologist, “they suggest that hearing underwent an independent but parallel evolution in birds and mammals.” The bar-tailed godwit flies across the Pacific Ocean for eight days without food, water, or sleep as we know it.  To do so (as Higgins and her interview subjects show), the birds take advantage of prevailing winds, which boost their wing-flapping speed.  And they are continually hitching onto different wind systems – which means they must know where they are at all times.

That innate sense of direction is, according to recent research, a result of the ability to detect the earth’s magnetic field.  Where, physically, is the bird’s sensor located?  And do humans share this ability?  Both are TBD but, as one scientist says, “How the magnetic sense works is perhaps the most significant unresolved question in sensory biology.”

Sometimes Higgins’ progressions can be hard to follow, as in the first chapter, discussing the peacock mantis shrimp and its astounding twelve color photoreceptors (humans have four).  She quotes one scientist as saying that this must make for “the richest, most harmonious chorus of colors imaginable.”  But by the end of the chapter, a few pages later, that surmise is shown to be totally incorrect – in fact the shrimp has pretty lousy vision — without giving the reader a good idea of how the rug got pulled out from under him.

Several times Higgins points out that humans have extraordinary sense perceptions:  scientists estimate, she says, that we can discriminate over a trillion different odors, and several million different shades of color, and hundreds of thousands of audible tones.  But how on earth were such incredible numbers arrived at, or calculated?  That is never explained.

The book includes a drawing (nicely done via scraperboard, by Caroline Church) at the start of each chapter, such as the drawings reproduced here, including this last one, of the duck-billed platypus, which hunts, underwater, with its eyes, ears, and nostrils completely closed:  it senses, with its bill, the weak electric fields that its prey produce when they contract their muscles. 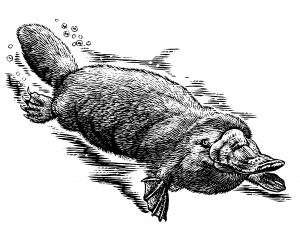 The connections between human and animal perception are a fertile field; a piece in last month’s New York Review of Books [password protected] lists five recent books on that, or on related subjects, and there are others, as well.  Sentient is a fine addition to that field.

Why we must always measure twice and minimize as soon as