Scotland’s Ian Stark is the designer of the Maryland 5 Star cross-country course, which riders will tackle tomorrow.

Maryland is Ian’s first five-star design job, though he has extensive experience of designing at four-star, including at Bramham Horse Trials. This is the second year the event has run, following its debut in 2021.

1. Ian has moved the position of the start and finish this year and feels this gives the Maryland 5 Star cross-country course better flow.

He explains: “It avoids finishing up the hill with a very big climb at the end of the course – last year some of the horses finished full of gallop and some were really toiling at the end. For me, the whole flow is better and it’s allowed me to keep the standard five-star all the way through.

“I felt from the bottom of the hill last year I had to back off and it was almost three-and-a-half to four-star on the way home. There were still technical difficulties, but I felt that I couldn’t really give the five-star dimensions, the big spreads, because the horses were getting a little weary.”

Ian added that he’s grateful for the support of the organisers in allowing him to move the start and finish, which involves a good deal of effort and investment in areas such as warm-ups and routes for the horses to move to and fro from the stables.

2. Ian has deliberately put the first fence, the CrossCountry App Flower Frame, off a bend.

“If anyone gets too too sneaky and tries to cut around that corner, they could easily have 20 penalties by running out of the first fence and I’m kind of hoping that they’re on the case but they’re not getting too excited at the start,” he says.

3. The course runs through the main arena for the first time. 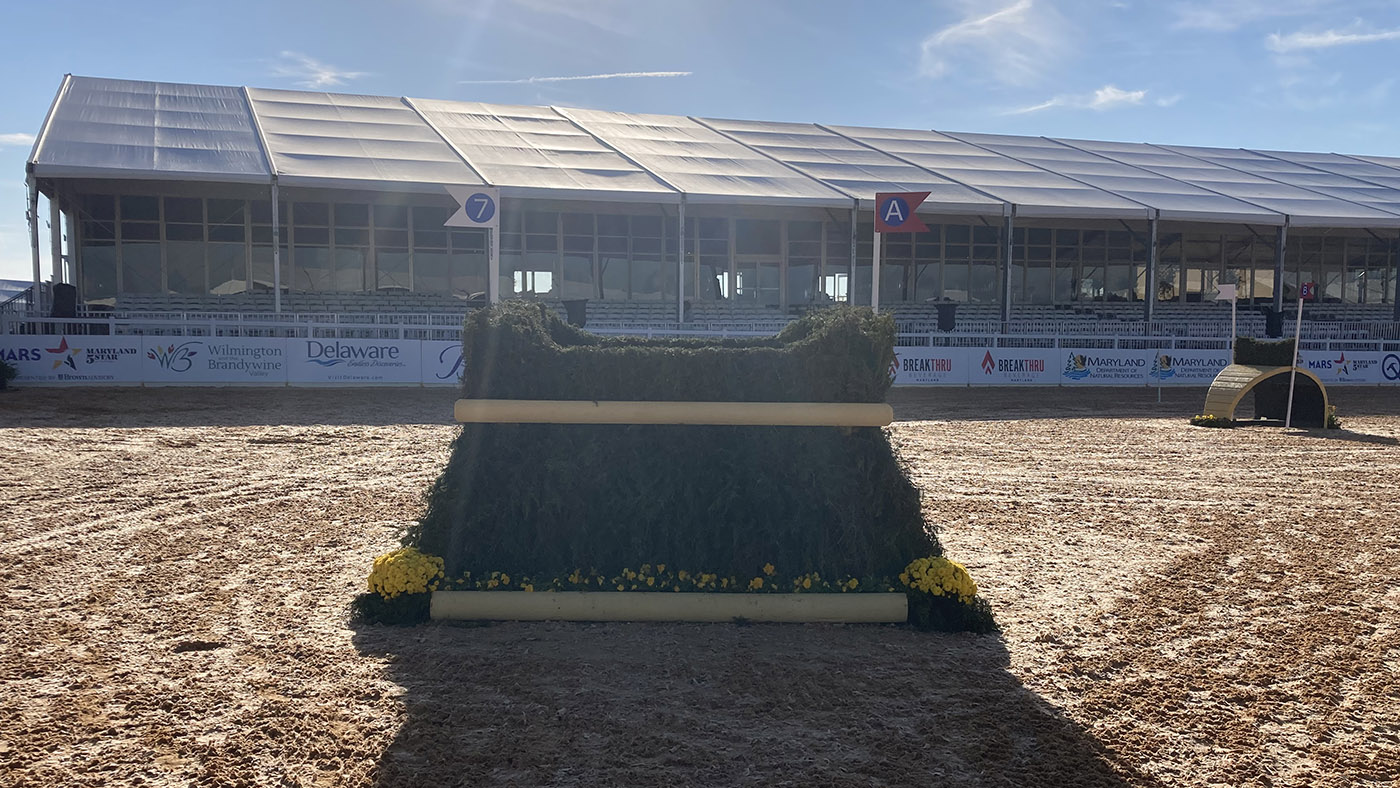 “I wanted to bring them in one corner of the arena and out the other – it did a little bit persuading to change the course around and then even more persuading to do this rather than going in and out in one corner,” says Ian. “But I’m a pretty bloody minded Scotsman and as always, the team are incredibly nice and generous to me.”

Ian commented that jumping the big brush box at fence 7a, the Cecil County Tourism Combination, straight towards the grandstand may back some horses off.

“If a horse is backed off and lands a bit steep, then the three strides to 7b might not be there,” he said. “So riders are going to have to be able to react to however the horse jumps that first element, but I don’t anticipate problems  here.”

4. He sees the combination at fence 10abc, the Mane ’n Tail Singerly Slide, as the first major question on the Maryland 5 Star cross-country course. 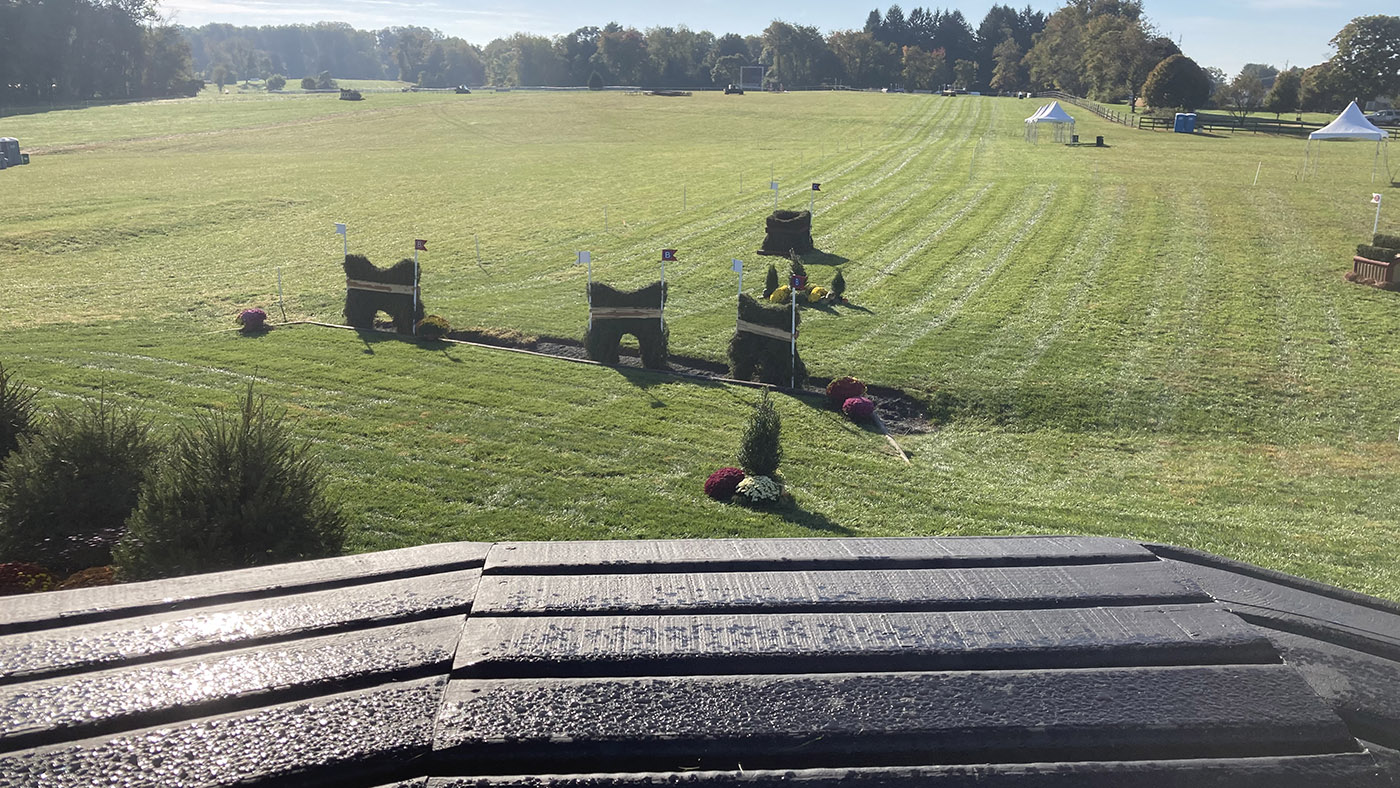 The direct line here should ride as five strides from the skinny at the top of the hill to the brush, then three strides to the narrow fence out.

“There is a long way and I put a whole lot of trees and flowers and pumpkins in the way to stop people trying to mix it up. But we could still see riders doing any any and every which way through there,” says Ian. 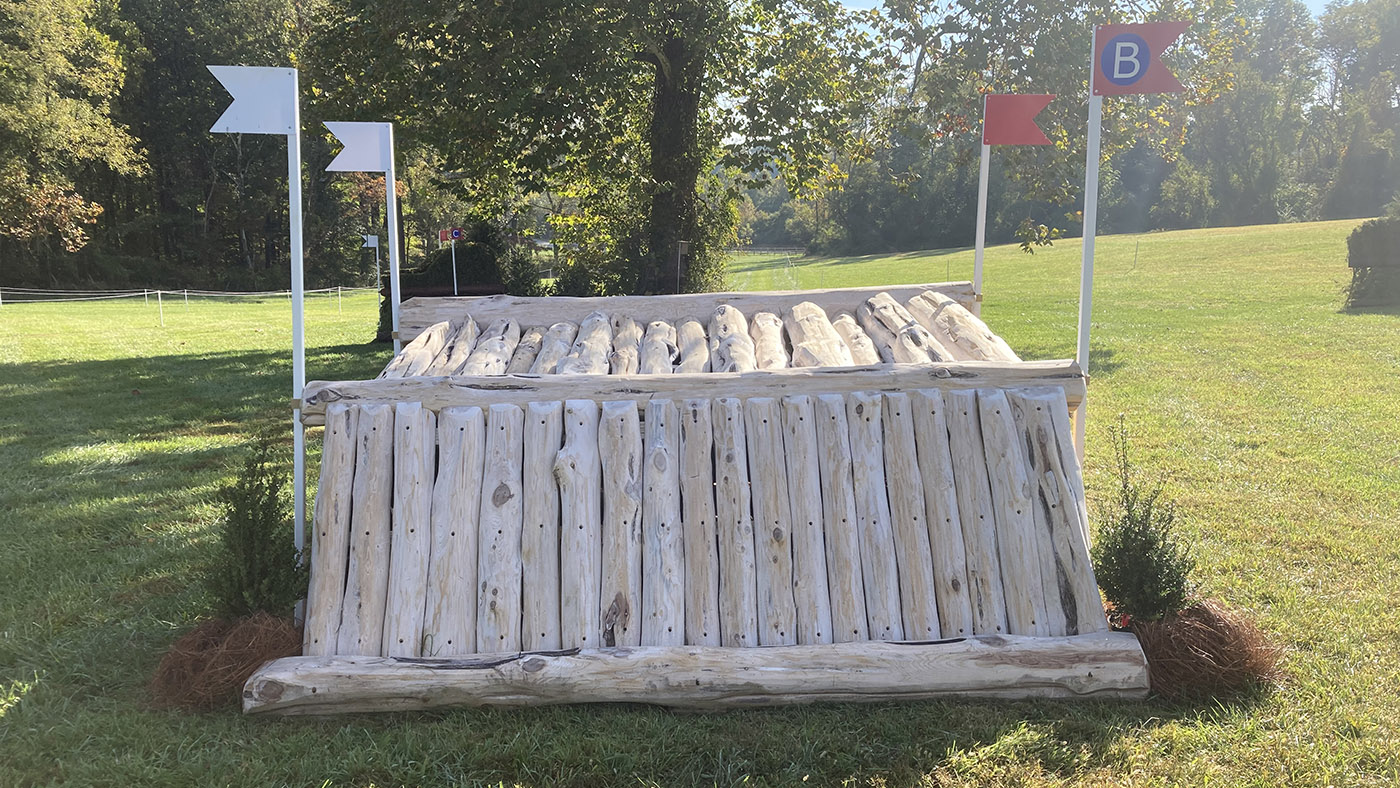 The direct line here is over two big tables on three strides, then four strides to the corner.

Ian says: “Tyson [Rementer] who built these fences for me said he’s been having sleepless nights about these tables because he thinks they’re huge. I think it’s great. I love big fences like that down the hill and what I really want to do is stand on the landing side of the second one – just to get a photograph of the expression on the riders’ faces because normally they go with their mouth wide open and their eyes popping.”

6. Fence 17, the Dubarry of Ireland Stick Pile, is maximum dimensions. 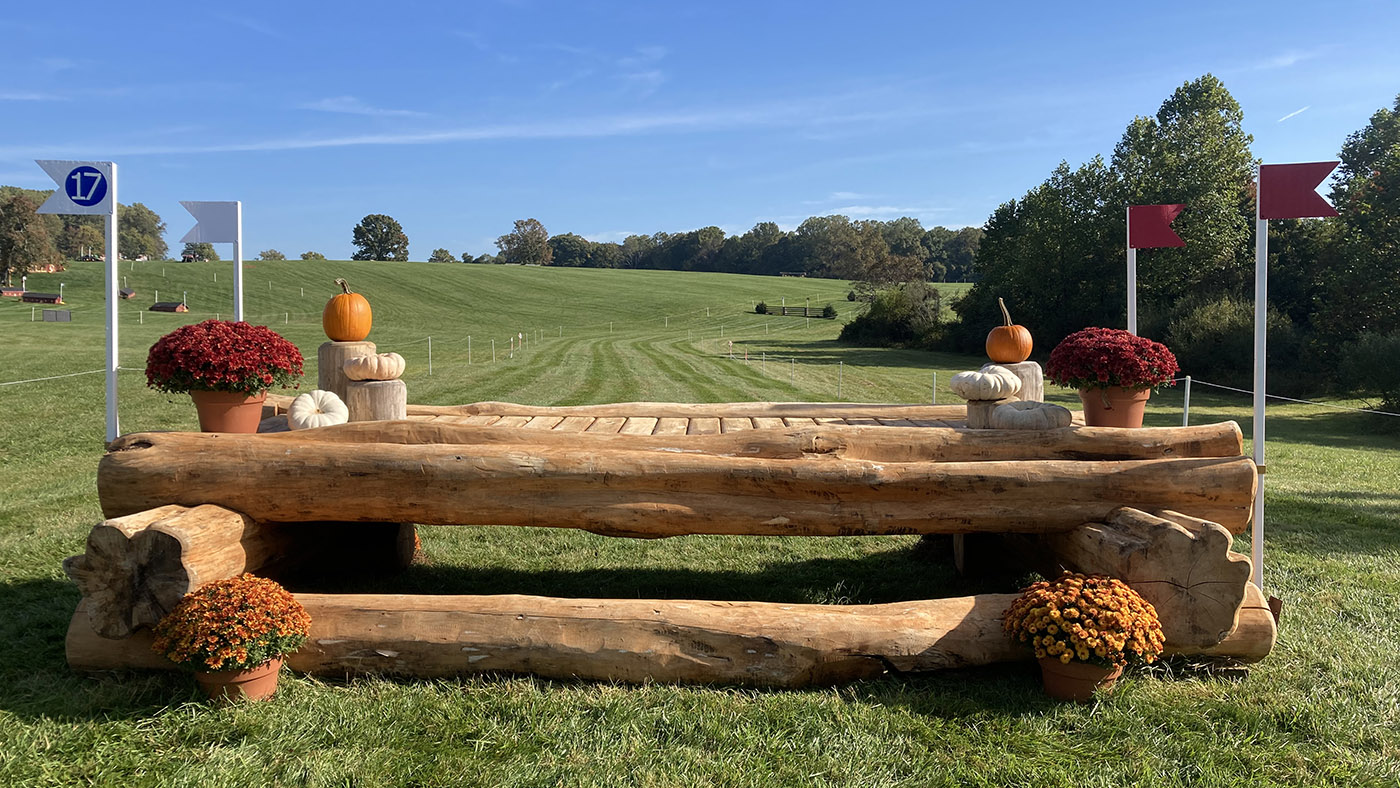 “It looks like a training fence and the reason is it’s so wide. So next year I’m going to take a chainsaw right through the middle of it and make it into two fences and it’ll look taller and I can make a double of them,” jokes Ian.

7. He’s aware the final water is a big question late on, nine and a half minutes into the course. 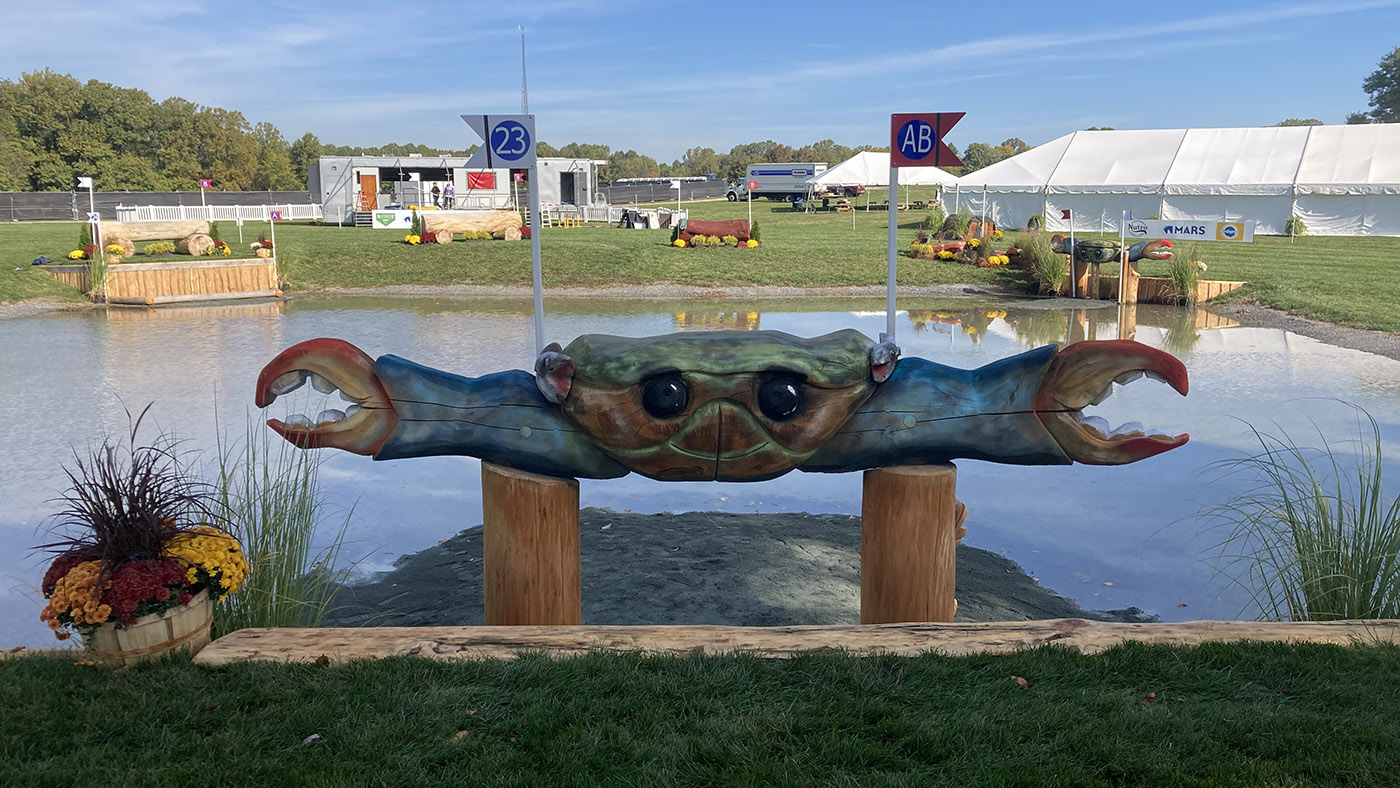 The approach to the Mars Sustainability Bay (fence 23ab and 24abc) deliberately involves a bit of flat ground to let horses recover. Then on the direct route, it’s in over the crab.

“Horses can’t see what they’re jumping until they run up that steep ramp and then they have only a couple of strides at the top to assess the situation,” Ian says. “It’s a big drop and then they’re looking straight into the Mars sponsors’ tent. I’m hoping that the fact that the horses come up there and there’s a lot to look at will sharpen them up, their reaction should be quick and they can pat the ground and pop in.”

8. Fence 25, the Foxcatcher Ditch, has been softened from last year. 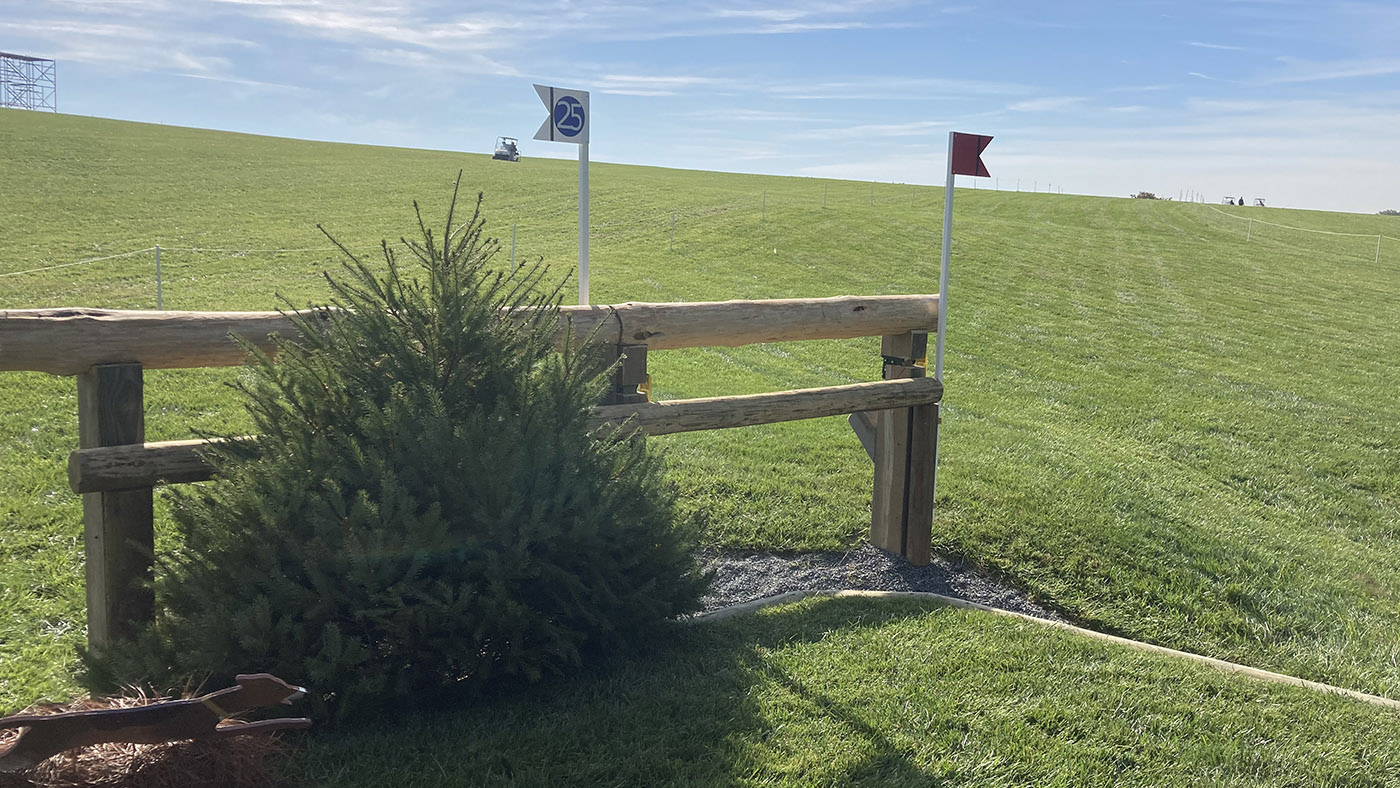 “This was a corner last year and I’ve moved the rail further away [from the take-off point], but I’ve taken the back rail off because I feel that this is four fences from home and the corner was too big a question at this stage in the course,” says Ian, who has also used the decoration to try to put horses and riders on the correct line here.

9. He hopes the optimum time will work out better than last year, when it proved a bit too easy to achieve.

“With hindsight, I must have been insane last year,” says Ian, reflecting on moving from last year’s inaugural Maryland 5 Star cross-country course to this second one.

“It was my first five star and it was a greenfield site. I didn’t know how the terrain was going to affect the horses and so I probably backed off a little bit more than I would like. Some horses finished full of running and others were really tired at the end. So I’m hoping that riders will have learned about the terrain they’re coming to, so therefore get their horses fit enough.

“I’ve got more of a handle on what to expect now and the riders have been very positive so far. I’m hoping that the flow works better this year and horses can finish more full of running and not quite so fatigued. But it’s 11 and a half minutes and it’s still going to be a tough question to get inside the time.

“Last year the ground was perfect – it was top of the ground, fast. And I got a lot of abuse about the timing. Hopefully, I’ve got it right this year. I’ve walked the course with a wheel, the two technical delegates have walked with wheels and we came within 20 metres of each other. No riders have attacked me yet about the timing, so hopefully it’ll be okay.”

Keep up with all of the breaking news, behind the scenes insight and the best of the action throughout Maryland 5 Star with no limit on how much you can read from as little as £1 per week with a Horse & Hound unlimited website subscription. Sign up now. Plus enjoy our full magazine report on Maryland, including in-depth analysis and exclusive comment from Mark Phillips, in next week’s magazine (20 October).